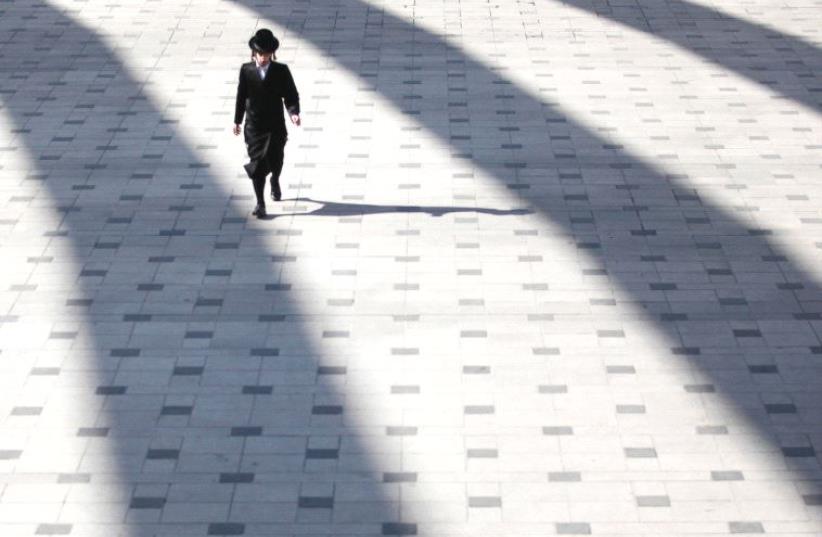 SECURITY AND INTELLIGENCE GROUPS LAUNCH INITIATIVE TO RECRUIT HAREDIM
(photo credit: MARC ISRAEL SELLEM)
Advertisement
Figures released by the Central Bureau of Statistics demonstrate that the number of employed Haredi men has decreased, ending more than a decade of almost continuous increases of this population in the workforce.According to the CBS figures, whereas 51.7% of Haredi men were employed in 2016, 50.3% were employed by the end of 2017.In 2002, the group’s employment stood at an all-time low of 35% but had risen to 40% by 2008 and reached a peak of over 51% last year, according to the CBS.The CBS findings are the second set of figures within six months to indicate that this number is shrinking again.In September 2017, the Bank of Israel warned about the declining employment rates of Haredi men, with its data showing a peak of 54% in the last quarter of 2015, but only 51% as of the end of the second quarter of 2017.The government’s target for 2020 was 66% but there is now no chance of achieving that before 2030, the Bank of Israel said at the time.The general rate of employment for men in Israel is approximately 80%.This decrease in the employment rates among the Haredi population has largely been attributed to the rise in yeshiva stipends, enacted by the current government, as well as an increase in other benefits enjoyed by the sector.“These subsidies allow Haredi men to postpone entering employment,” said Dr. Gilad Malach, the director of the Ultra-Orthodox in Israel Program at the Israel Democracy Institute.“The subsidies include doubling yeshiva students’ scholarships, increasing child allotments, granting a special allowance to yeshiva students whose wives do not work, and canceling the requirement that fathers must be employed in order to enjoy subsidized daycare centers for their children,” he said.He noted that some government ministries and bodies are working to integrate Haredim into the workforce, but these efforts are being canceled out by the subsidy package.“When the right hand helps to integrate Haredim into employment and the left hand causes them to remain in the yeshiva, the result is a standstill and even a decline in the rate of Haredi employees.”