October 2018 was best ever month for Israel's tourism industry

A total of 3.4 million visitors stayed for an average of eight days in Israel in 2018 so far. 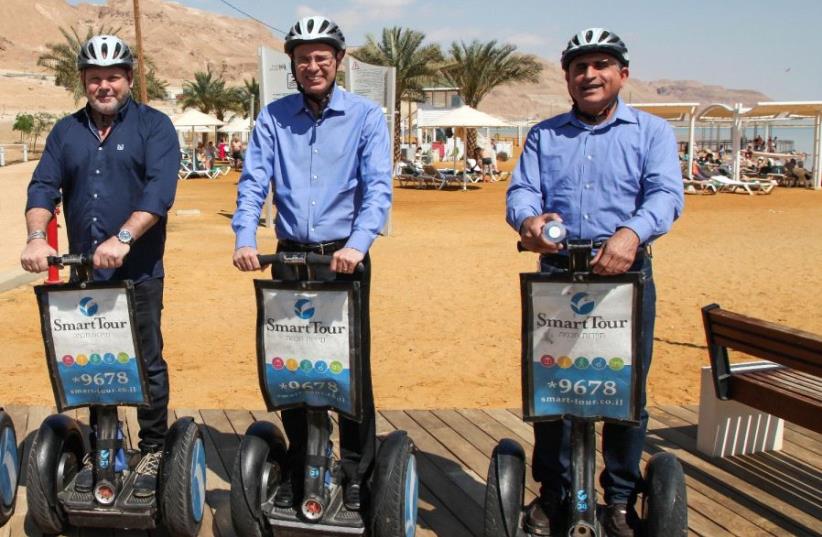 Tourism Minister Yariv Levin (center) rides a Segway Monday morning down a recently completed 3 km.-long promenade off the coast of the Dead Sea.
(photo credit: TOURISM MINISTRY)
Advertisement
A total of 3.4 million visitors stayed for an average of eight days in Israel in 2018 so far.The month of October might have just ended, but it was certainly an impressive month for Israel’s tourism industry.The Tourism Ministry released a report in which it said that more tourists had visited Israel in October than ever before, with a total of about 486,000 registered entries to the country. This represents a 19% increase over April 2018 numbers, which held the previous record for tourist entrances, and a 14% increase from October of last year.Tourists spent an impressive 2.5 billion shekels in October alone, adding to a total of 18 billion shekels that foreigners have spent in Israel since the beginning of the year.Tourism Minister Yariv Levin spoke of his elation over the record statistics.“The month of October broke a historic record with unprecedented numbers of almost half a million tourists that visited Israel in just one month,” Levin said. “We are registering this excellent data month after month for two years already, and they are a direct result of the strenuous efforts we make at the Tourism Ministry.”A direct correlation can be identified between countries from which tourism increased and where the Tourism Ministry invested most in marketing over the past two years. In a year-over-year comparison, 65% more Hungarians and 50% more Italians visited Israel in October, and the country saw a 40% increase of visitors from Poland, the Netherlands and Romania. The ministry spent an average of 47% more on marketing in these countries.