In the plea bargain that Olmert agreed to on January 18, he admitted to obstruction of justice with Zaken in both the Talansky Affair and the Holyland Affair. 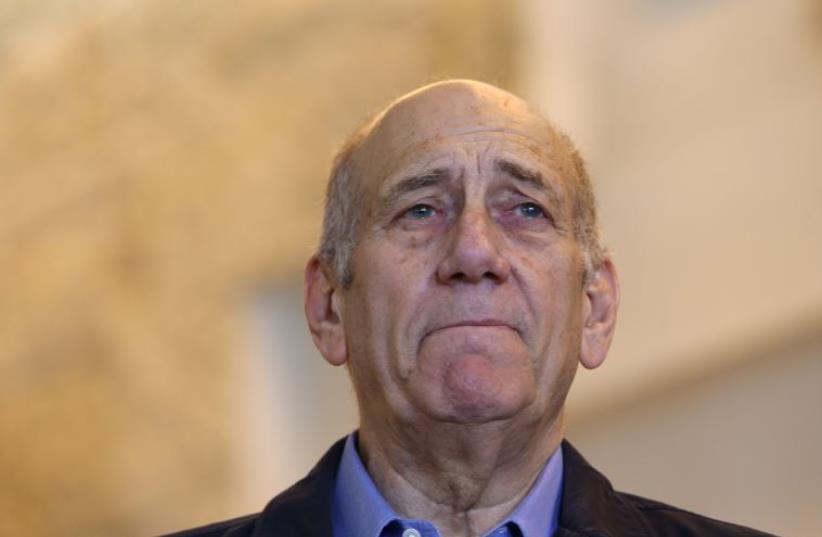 Former PM Ehud Olmert
(photo credit: AMIT SHABAY/POOL)
Advertisement
Ehud Olmert was convicted by the Jerusalem Magistrate’s Court of obstruction of justice in the Shula Zaken secret tapes saga on Tuesday, as expected, but the court threw him a curve ball, implying it may reject part of the former prime minister’s plea bargain and give him additional jail time.In the deal agreed to on January 18, Olmert admitted to obstruction of justice with Zaken in both the Talansky and Holyland Affairs.He also agreed to a sixmonth jail sentence and NIS 50,000 fine, but the sentence was due to run concurrent with his 18-month Holyland sentence and, therefore, not add any further jail time.His sentence is set to begin on February 15.But Judge Avital Chen shocked both the prosecution and Olmert’s legal team by refusing to pronounce sentence in line with the deal, setting February 10 as a separate hearing day to make the decision.It is rare for courts reject a plea bargain, as the law gives the prosecution wide discretion on such issues; most observers expect Chen to ultimately fall in line.But Chen’s repeated challenges of the prosecution to defend its failure to add on more jail time for Olmert despite what was considered a slam dunk case against him, suggested the possibility that Chen may indeed add months onto his sentence.The Jerusalem Post has learned that Olmert has not made a formal request for a pardon to President Reuven Rivlin, though sources close to him had hinted they would seek one, despite the start of his sentence being less than two weeks away.When the plea bargain was announced, many also expected Olmert and the prosecution to reach a deal on the Talansky, Rishon Tours and Investment Affairs, but talks on those cases ultimately broke down and the sides argued them before the Supreme Court on January 19.From their arguments to the Supreme Court, it was clear that the sides split over whether any jail time Olmert agreed to in those affairs would run concurrent with his Holyland sentence or whether time would be added to the sentence.The prosecution was ready to let the six-month sentence in the tapes saga be subsumed by the 18-month sentence, but was not ready to make the same concession on the eightmonth Talansky Affair sentence.Chen only improved the prosecution’s standing on refusing to reduce jail time for Olmert on the Talansky Affair by attacking the deal achieved in the tapes saga.The prosecution said Olmert had expressed regret, endured years of legal challenges and that his actions were weak on the obstruction scale because Zaken had acted in concert with him, voluntarily.Chen, however, pressed them that Olmert’s regret was not genuine, but rather just to save his neck from more jail time, and that the case had been a slam dunk with no evidentiary problems.Olmert’s lawyer, Eyal Rozovsky, said that even if the Zaken tapes were ruled good evidence in the Talansky Affair, he could have challenged them in any trial on obstruction of justice because many more tapes would be in play and with more questions about problematic editing.The plea bargain on obstruction of justice was filed by the Central District Attorney’s Office with the Jerusalem Magistrate’s Court simultaneously with a new indictment for the two separate counts of obstruction of justice corresponding to the Talansky and Holyland Affairs.In early January, Rozovsky met with head State Prosecutor Shai Nitzan to discuss a deal that could wrap up all the former prime minister’s many remaining legal troubles.Discussions were held with the aim of agreeing to a set amount of prison time he would serve for all the remaining cases, so as to save time on further trials and appeals to the Supreme Court and globally reduce his prison time.In May 2015, the Jerusalem District Court sentenced Olmert to eight months in prison following his conviction in the Talansky Affair retrial, one of three violations he was accused of in the Jerusalem corruption trial.The Talansky case consisted of Olmert illegally receiving, using and concealing at least $153,950 in envelopes from New York businessman Morris Talansky between 1993 and 2002.The sentence for the Talansky Affair was his second jail term following the Holyland sentence, which the Supreme Court reduced on appeal, from the original six years ordered.The Talansky retrial came out of the state’s appeal of Olmert’s July 2012 acquittal in the original trial to the Supreme Court, which was sent back to the district court for a retrial in the summer of 2014.A Supreme Court order for a retrial of these cases came after recordings emerged suggesting Olmert may have been illegally plotting with Zaken, his former aide of 30 years, regarding the handling of his original trial.Zaken refused to testify in the first trial and perjured herself on Olmert’s behalf during the Holyland trial, without letting on about the existence of the recordings until the cases were being appealed and she negotiated a separate deal with prosecutors.Olmert admitted to telling Zaken not to testify in the first trial and to not cut a deal with the prosecution in the Holyland trial while offering to arrange for her to be paid large sums of money, including having her legal fees covered.Zaken listened and refused a plea bargain, but took the stand in the Holyland trial.