Oren Hazan, who came in 16th place, ‘won’t rule out’ running against Netanyahu for party 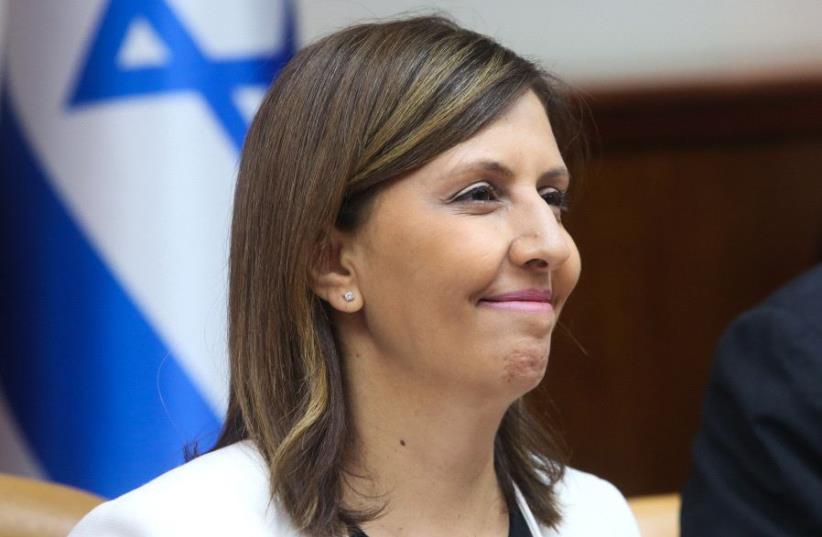 Gila Gamliel
(photo credit: MARC ISRAEL SELLEM)
Advertisement
Social Equality Minister Gila Gamliel came in first place in the model Likud primary held at the Likudiada retreat for Likud members in Eilat, in results released on Saturday night.“I thank the Likud family for the clear trust they put in my work on social issues,” she said. “I’ve made a great effort to close social gaps and create social equality.“This weekend, we saw proof that the Likud grassroots has values, is determined and enlisted in the effort for the party to succeed in leading the country,” Gamliel said.
MK Oren Hazan (Likud) snaps a selfie with visiting President Donald Trump (credit: GPO)
Gamliel was followed by Culture Minister Miri Regev, whose aide is one of the organizers of the Likudiada, a privately run retreat for Likud members.Many Likud lawmakers attend, though Regev, Gamliel and Communications Minister Ayoub Kara were the only ministers in the party who made their way to Eilat for the weekend.In third place was Science and Technology Minister Ofir Akunis, followed by Knesset Speaker Yuli Edelstein, tied with Tourism Minister Yariv Levin and MK Yoav Kisch.Rounding out the top 10 were Public Security Minister Gilad Erdan, coalition chairman David Amsalem, MK Amir Ohana and MK Miki Zohar.Also on Saturday night, Channel 2 News released a poll of Likud voters in which they ranked party representatives as follows: Regev, then former Likud minister Gideon Saar – who came in 14th at the Likudiada – Erdan, Deputy Foreign Minister Tzipi Hotovely – who came in 23rd at the Likudiada – and Transportation Minister Israel Katz, 13th at the Likudiada.Foreign Affairs and Defense Committee chairman Avi Dichter came in sixth in the Channel 2 poll and 11th at the Likudiada, followed by National Infrastructure, Water and Energy Minister Yuval Steinitz, who did not rank in the Likudiada top 30, Edelstein, MK Oren Hazan – 16th at the Likudiada – and Gamliel.Prime Minister Benjamin Netanyahu’s son Yair Netanyahu came in second place in the slot for young candidates, less than a week after a recording of his drunken boasting following a visit to a strip club was aired on Channel 2 News.The Likudiada primary originally included a question asking who attendees thought should be leader of the party after Benjamin Netanyahu, but it was removed after two of the more serious contenders, Edelstein and Katz, said they did not want to be included.Scandal-plagued Likud backbencher Oren Hazan said he may run against Benjamin Netanyahu for prime minister, he said at the “Likudiada” retreat for Likud members in Eilat Friday.“I don’t rule out running for the head of the Likud before the next election, no matter who the candidates are,” Hazan said on stage at the event.
Hazan, who entered the Knesset in the Likud’s young candidate slot in the 2015 election, has been a magnet for scandal in his nearly three years in the Knesset, beginning with a Channel 2 report that he was involved in pimping and drug dealing in Bulgaria, to sneaking into US President Donald Trump’s reception at the airport and taking a selfie with him, to almost getting into a fist fight with a Jordanian parliamentarian and endless shouting matches with his fellow Knesset members.Still, sources close to the 36-year-old said he is confident he could do well in a race against Netanyahu.Speaking at the Likudiada, Hazan said: “When a man who’s not a politician is elected president of the US, who is old in his age, but young at heart, and around the world this year, young people are being elected, like Emmanuel Macron in France who’s 39 years old, Sebastian Kurtz in Austria who’s barely over 30 and a young woman in New Zealand, there’s no reason the prime minister [of Israel] can’t be under 40.”This week, the State Comptroller’s Office said that the Likudiada constitutes an illegal Likud campaign donation, and fined the party NIS 350,000.The Likud said the event is no different from any other event held by private party members, and plans to contest the fine in court.