Arabic media outlets depict a 'besieging of Al-Aqsa mosque' while some reporters try to give a more nuanced view. 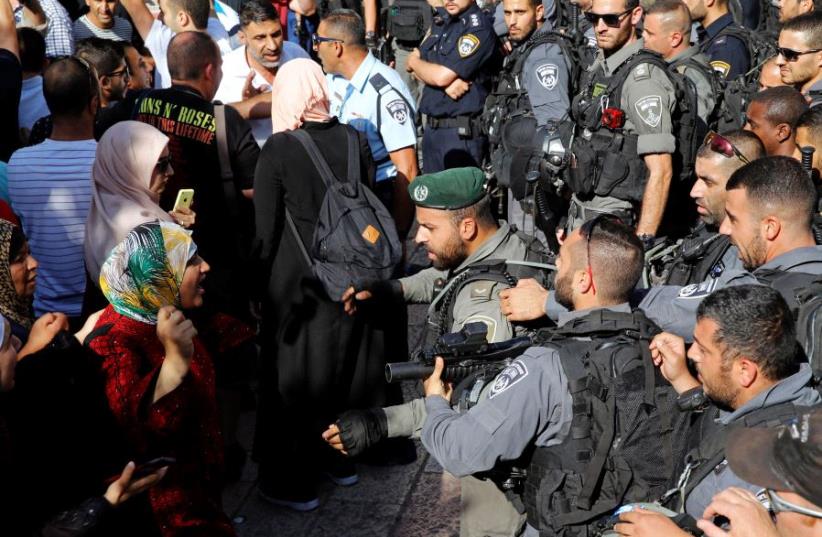 A Palestinian woman argues with an Israeli border policeman at the entrance to the compound known to Muslims as Noble Sanctuary and to Jews as Temple Mount, in Jerusalem's Old City
(photo credit: AMMAR AWAD / REUTERS)
Advertisement
The Twitter account of 48 NNews which is followed by 25,000 shows video of protests against Israel in the Old City of Jerusalem. “The besieging of Al-Aksa mosque,” claims the tweet. Other tweets note that “the real test will come Friday when tens of thousands come to pray.”A survey of numerous Arabic media sites and individuals that use social media to broadcast their message reveals several trends. Many include video of crowds being dispersed or protesters chanting and praying over the last few days. Under the hashtag “occupation,” calls by Hamas to “reject the Israeli closure measures” and to “stick a fork in the Zionist occupation” are broadcast. A pro-Muslim Brotherhood Twitter account shows dozens of Jewish “settlers storming the Al-Aksa Mosque.” Social media under hashtags such as “AlQuds,” the Arabic name for Jerusalem, are a mix of anti-Israel tweets, rumors about arrests of young men (termed “young lions” in Arabic) and clashes. There are tweets about settlers “storming” the Temple Mount, and photos highlighting Muslim solidarity, with old men sitting in the Old City awaiting prayers and communal facilities passing out food.Some sites provide nuance to the story. For instance Quds TV’s breaking news Twitter account claims that “The Israeli shabak [Shin Bet] recommended removing the detectors and the occupying police refuse,” which tries to show there are disputes within Israel. It claims Prime Minister Benjamin Netanyahu is consulting advisers about removing the metal detectors.Similarly the Al-Quds daily’s website has an article claiming Saudi Arabia sought to intervene through US contacts and that “Netanyahu invited Saudi officials to visit Jerusalem and Al-Aksa to inspect the situation on the ground.” The Palestine Information Center, with its 200,000 followers, also seeks to show that Netanyahu is considering removing the detectors and that Israel security services recommended removing them.The bifurcation between rumor-mongering accusing Israel of “signs of a takeover,” as Al Jazeera reported on Tuesday, and Arabic language media that suggest Israel might remove the metal detectors shows there is tension between heating up the passions of the Palestinian and Muslim public and toning down the rhetoric.