The fire was first noticed around midnight by prison guards who rushed to the scene and evacuated the inmates from the cell and put the fire out before it could spread further in the facility. 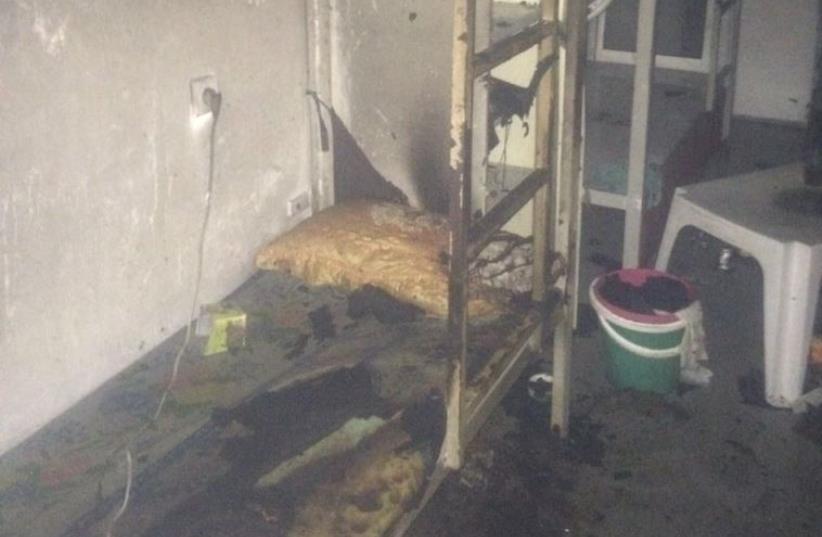 Fire at Shita prison
(photo credit: Courtesy)
Advertisement
A Palestinian inmate was badly injured during a fire that was set by his cellmates in Shateh prison in northern Israel overnight Monday.The fire was first noticed around midnight by prison guards who rushed to the scene and evacuated the inmates from the cell and put the fire out before it could spread further in the facility.The investigation into the fire has just started, but the IPS said Tuesday they have ruled out the possibility that the fire spun out of control after two of the inmates attempted to torch the badly wounded cellmate.Asaf Libertine, spokesman for the IPS, said that the three were protesting their conditions – including a recent search of their cell – and that “this protest almost cost them their lives.”All three men are Palestinians from the West Bank serving sentences of between 4 to 8 years for property crimes and robbery, the IPS said.Shateh prison is located outside Kibbutz Beit Hashita in the north, and is home to 560 prisoners and 240 staff.It was built in the 1950s and has long had a reputation for being one of the toughest prisons in Israel.In 1958, it was the site of a deadly prison riot, during which 66 prisoners escaped, and two guards and 11 inmates were killed.In June 2014, the IPS announced that they had foiled an attempt by Islamic Jihad security prisoners to tunnel out of the facility. The IPS said the tunnel was dug inside the bathroom of a cell and was four meters long and almost two feet wide, leading into a yard in the prison.They also found fake prison guard uniforms and fake IPS badges made out of cardboard.