Palestinian, Israeli protesters: ‘The last day of the occupation is the first day of peace'

Some of the activists waved large Palestinian flags that fluttered next to the passing cars and others had held olive branches. 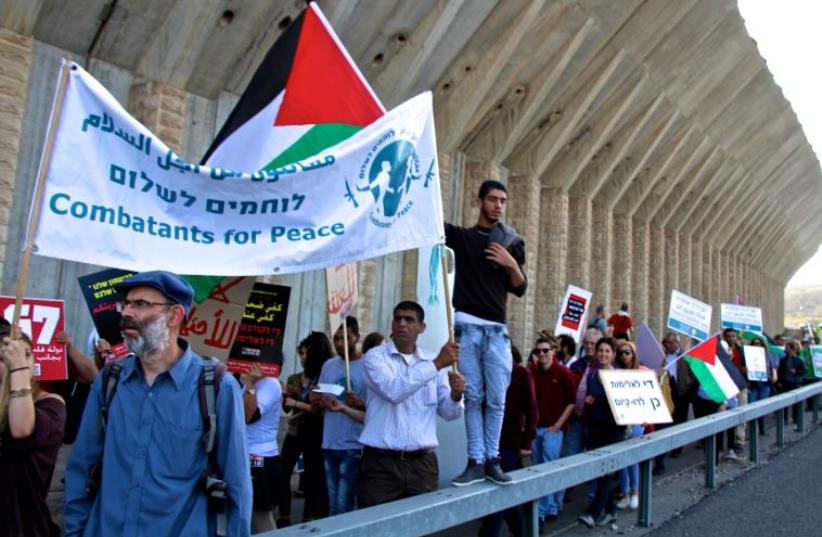 Israelis and Palestinian rally for peace along Route 60 in the West Bank on Friday
(photo credit: TOVAH LAZAROFF)
Advertisement
“Yes, yes, to peace; No, no, to violence,” chanted an Israeli activist through a megaphone Friday afternoon as he perched on a guard rail on Route 60, wearing a neon yellow safety vest.Around him stood several hundred Israeli and Palestinian activists, primarily from the left-wing, bi-national group Combatants for Peace.Led by drummers, they had marched down Route 60 toward the checkpoint to Jerusalem and stopped to hold a protest where the road splits in the direction of the Har Gilo settlement and the Palestinian city of Beit Jala.Some of the activists waved large Palestinian flags that fluttered next to the passing cars; others held olive branches.At points during the march, they would pause and face the cars with their backs to a large security barrier that guards the road from Palestinian attacks.They held up signs that read: “There is another way” and “We stand together against the occupation.”Some of the passing drivers honked in support while others heckled the marchers.“You are totally clueless!” yelled one woman from the rolled down window of a passing car.The activists initially had planned to hold the march one week earlier, but canceled it after the November 19 terror attack in which Ezra Schwartz, 18, Yaakov Don, 49, and Shadi Arafa, 24, were killed after a Palestinian gunman shot at cars at the Gush Etzion junction just down the road from where the march was held.On Friday, off of that same road, a Palestinian assailant rammed his car into a group of soldiers who stood near the entrance to the Beit Umar village.Six of them suffered light to moderate wounds.But those who marched along Route 60 said they opposed all violence and that peace could be achieved if Israel withdrew to the pre-1967 lines.“We live in difficult times,” Israeli activist Maytal Lochoff told the group through a megaphone.“Innocent people are dying every day and it is hard to see how this will end,” she said.“The brave thing to do is to find what is common between us and use that as a base to build a better tomorrow. Let’s break the violence and change the future,” she said.Rami Elhanan, told the activists his daughter Smadar, 14, was killed in a 1997 suicide bombing in Jerusalem, and that since then he has been dedicated to working toward peace.“I came today to protest the ongoing violence and the ongoing killing of children,” he told The Jerusalem Post.Ahmed Hilo, a Palestinian activists from Jericho blamed the Palestinian violence on Israeli policies such as roadblocks, settlements building and closures against Palestinian villages.“We came here, today, to non-violently end the occupation. We are protesting here together, Israelis and Palestinians, who want to live side-byside in peace,” Hilo said.“We are standing on Palestinian land that more than 137 nations have recognized, but Israel has refused to recognize it or our right to live here in freedom and peace,” he said.“We are sending our message to the Israeli people; the occupation and the settlements are the basis of the violence and the fear and the lack of security. There is no military solution to this conflict. The last day of the occupation is the first day of peace. Without peace there won’t be security for the Israelis or freedom for the Palestinians,” Hilo added.Former Hadash MK Mohammed Barekeh said Israeli gestures to the Palestinians won’t ease the violence.“We are not looking for a cosmetic solution to occupation, it will remain ugly and unjust and must be ended,” he said, adding that it is not possible for normalcy and peace to rule in the West Bank when the “occupation” creates such an abnormal and “brutal” situation for the Palestinians.“We are sorry for every drop of blood that is spilled on either side, but those who want to end the violence must move the checkpoints back to the ’67 line, which would then be a border for the two peoples,” Barakeh said.