She said she would use some of the money to promote her education methods and support fellow teachers in the Palestinian territories. 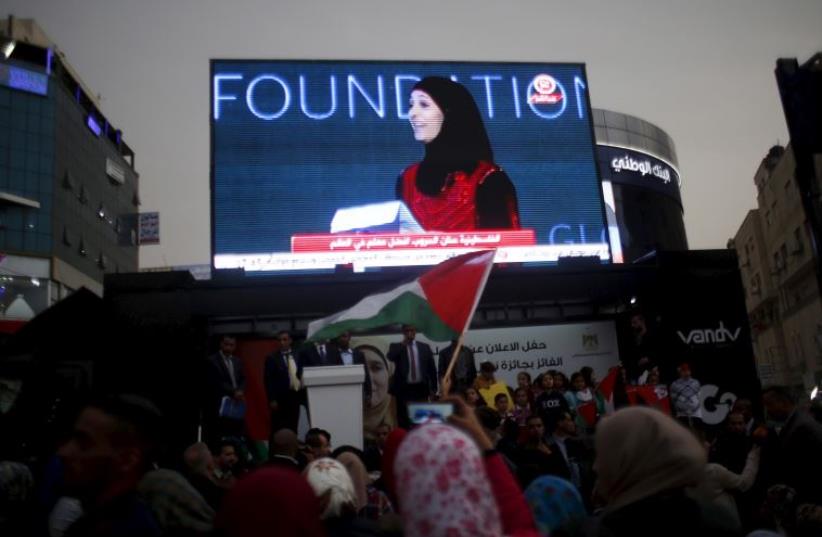 Palestinians watch on a screen in the West Bank city of Ramallah March 13, 2016 as primary school teacher Hanan al-Hroub receives the Million Dollar Teacher award.
(photo credit: REUTERS)
Advertisement
A Palestinian school teacher won a $1 million education award on Sunday (March 13) to applause from world leaders for helping children to learn through play.Hanan Al Hroub, who teaches at the Samiha Khalil High School in the West Bank Palestinian city of Al-Bireh, was presented with the award in the United Arab Emirates (UAE).The Global Teacher Prize was set up by the not-for-profit Varkey Foundation after a 2013 survey found the profession's status had been declining.Hroub, who grew up at a refugee camp near the West Bank city of Bethlehem, beat nominees from Japan, Canada, Kenya, the United States and the United Kingdom.Speaking ahead of the ceremony, Japanese finalist Kazuya Takahashi said he was inspired to become a teacher due to his great teachers and said he hoped in turn to inspire his students to become teachers themselves."Looking back on my life, I have been blessed with many good teachers. For a long time, it has been my dream to be like them. I am really happy to be able to do what the teachers I look up to, do," said Takahashi."I can't believe it. There are many teachers in the world who are much better than me. I think it is good that through this (nomination), I have been able to show the high quality of education in Japan. I have been able to meet many great teachers from around the world. I hope this will be a catalyst for many people to want to become teachers."Hroub, who has detailed her approach in a book entitled 'We Play and Learn', said: "I am proud to be a Palestinian female teacher standing on this stage."Wearing a traditional Palestinian dress decorated with red embroidery, she accepted the prize "as a win for all teachers in general and Palestinian teachers in particular."She said she would use some of the money to promote her education methods and support fellow teachers in the Palestinian territories."You are the power. You are the true power. Believe in your ideas, work on them, convince people of your ideas, challenge the whole world, convince people of your ideas so you can spread them and you will find yourself here. (It all starts with) an idea,"Hroub said after she won.Pope Francis announced the winner in a video message to the ceremony, which was chaired by UAE Prime Minister and Dubai ruler Sheikh Mohammed Bin Rashid Al Maktoum.Leaders including Pope Francis, Britain's Prince William, UN Secretary-General Ban Ki-moon, US Vice President Joe Biden and former US President Bill Clinton recorded messages for the ceremony.