Parents of slain Israeli soldier meet US envoy at UN

During their meeting, the Goldin family requested that Ambassador Haley assist in their efforts for the return of the bodies of their son and Sgt. Oron Shaul, also held in Gaza, for burial in Israel. 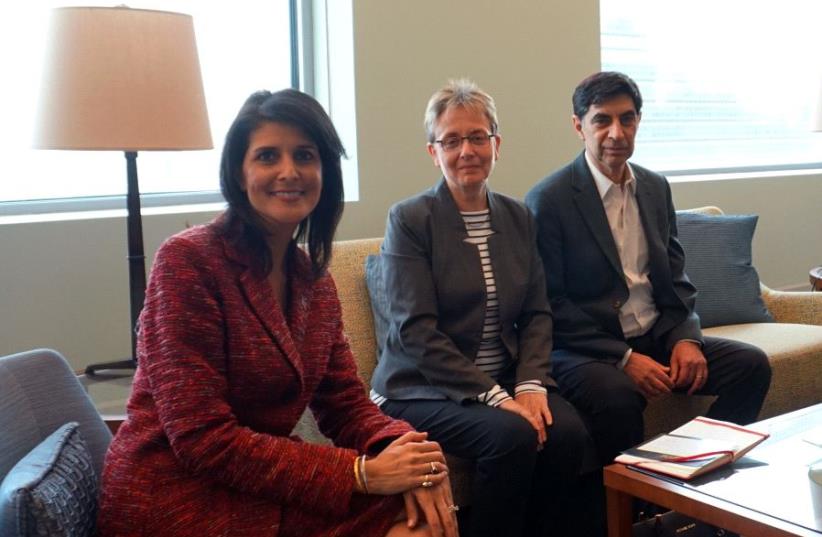 US envoy to the UN, Nikki Haley, meets with the parents of Hadar Goldin.
(photo credit: US MISSION TO THE UN)
Advertisement
NEW YORK – The parents of Lt. Hadar Goldin, who was killed in Gaza during Operation Protective Edge in 2014 and whose body is being held by Hamas, met on Wednesday with US Ambassador to the UN Nikki Haley.
During the meeting, the Goldin family requested that Haley assist in their efforts for the return of the bodies of their son and Sgt. Oron Shaul, also held in Gaza, for burial.Goldin’s parents, Leah and Simcha, have made several trips to the United States over the past year to campaign for their cause. They have held meetings at the United Nations with officials including then-secretary-general Ban Ki-moon; his assistant for peacekeeping operations Edmond Mulet; and Israel’s Ambassador to the UN Danny Danon.A representative of the US Mission to the UN said that during the meeting, Haley pledged to advocate on behalf of Hadar Goldin and work with Leah and Simcha as well as with the Israeli Mission and other US partners at the UN for the return of Hadar to his family.
Memorial service for IDF soldier Hadar Goldin , whose body is being held for ransom in Gaza after he was killed in Operation Protective Edge in 2014
“We appreciate Ambassador Haley’s willingness to assist us in the return of our sons and we hope that these efforts bear fruit as soon as possible,” Goldin’s parents, who had previously described the matter as a “humanitarian issue,” said.Danon also thanked Haley for meeting with the family.
“Hadar was killed and kidnapped by despicable terrorists during a UN-sponsored cease-fire, and we won’t rest until this organization ensures his and Oron’s return for proper burial in Israel,” he added.Back in September, the Goldins joined Prime Minister Benjamin Netanyahu in his trip to address the United Nations General Assembly in New York.
During that visit, they attended several events including a meeting with the consul-general of Israel in New York, Dani Dayan, and encounters with the Jewish community in the city.A selection of Hadar Goldin’s drawings were displayed in one of the main exhibition areas of the United Nations headquarters during the time world leaders converged on the building.