Pence: US Embassy in Israel to move to Jerusalem by end of 2019

‘US stands with Israel because it believes in ‘right over wrong, good over evil, liberty over tyranny’

By HERB KEINON, LAHAV HARKOV
JANUARY 22, 2018 22:28
Arab Israeli lawmakers are escorted out of Israeli parliament during Vice President Mike Pence's speech (Reuters)
Advertisement
The United States will open its embassy in Jerusalem by the end of 2019, US Vice President Mike Pence said in an exceptionally warm speech from the Knesset podium on Monday, putting a concrete time frame on the embassy move for the first time.“Jerusalem is Israel’s capital,” Pence said in speech shot through with Biblical references. “In the weeks ahead, our administration will advance its plan to open the United States Embassy in Jerusalem, and that United States Embassy will open before the end of next year.”Trump’s decision has infuriated the Palestinians, and led to a brief demonstration at the beginning of Pence’s speech when members of the Joint List unfurled a sign saying “Jerusalem is the capital of Palestine.” They were quickly removed.Pence was warned in advance about possible disruptions during his address and took the interruption in stride, praising Israel’s “vibrant democracy.”He reiterated what US President Donald Trump said when Trump recognized Jerusalem as Israel’s capital last month, saying the president made clear the US was not taking any position on final-status issues, such as the boundaries of Jerusalem.And he asserted, “If both sides agree, the United States of America will support a two-state solution,” a comment met by a standing ovation from the opposition, even as the coalition noticeably stayed in their seats.The vice president, who arrived in Israel on Sunday evening for a two-day visit, said Washington appreciated Israel’s willingness to resume direct negotiations and “strongly urges the Palestinian leadership to return to the table. Peace can only come through dialogue.”Pence said the US recognizes that peace will require compromise, but assured Israel that the US will never compromise on Israel’s security.Unlike high-profile speeches made in Israel by his predecessor, Joe Biden, or former president Barack Obama, Pence’s speech did not once mention the settlements.As unequivocal as Pence was about Jerusalem, he was equally firm regarding Iran, saying Trump will no “longer certify” what he called the “ill-conceived” nuclear agreement.“Unless the Iran nuclear deal is fixed, President Trump has said the United States will withdraw from the Iran nuclear deal immediately,” he said.Pence also minced few words regarding the nature of the Iranian regime.“As the world has seen once again, the brutal regime in Iran is merely a brutal dictatorship that seeks to dominate its citizens and deny them of their most fundamental rights. History has proven, those who dominate their own people rarely stop there, and increasingly we see Iran seeking to dominate the wider Arab world.”Interestingly, Pence chose the Knesset rostrum as the site from which to address the Iranian people, saying America is their friend and “The day is coming when you will be free from the evil regime that suffocates your dreams and buries your hopes.”Pence’s words – full of warm expressions of support for Israel and the Jewish people – were met with one standing ovation after another.Trump, he said, has done more to bring “our two great countries closer together” than any president in the past 70 years.“We stand with Israel, because we believe in right over wrong, in good over evil, and in liberty over tyranny,” he stated. “The people of the US have always held a special affection and admiration for the People of the Book. In the story of the Jews, we’ve always seen the story of America. It is the story of Exodus, a journey from persecution to freedom, a story that shows the power of faith and the promise of hope.”Pence, the first US vice president to address the Knesset’s plenary, spoke to a packed room.A devout Evangelical Christian, Pence paraphrased Psalms: “The USA is proud to stand with Israel and her people, as allies and cherished friends. And so we will pray for the peace of Jerusalem, that those who love you be secure, that there be peace within your walls and security in your citadels. And we will work and strive for that brighter future, so everyone who calls this ancient land home shall sit under their vine and fig tree, and none shall make them afraid.”During the speech, Pence spoke lyrically at times about Israel and the Jewish people.“As I stand in Abraham’s Promised Land, I believe that all who cherish freedom and seek a brighter future should cast their eyes here and marvel at what they behold. How unlikely is Israel’s birth; how more unlikely is her survival,” he said. 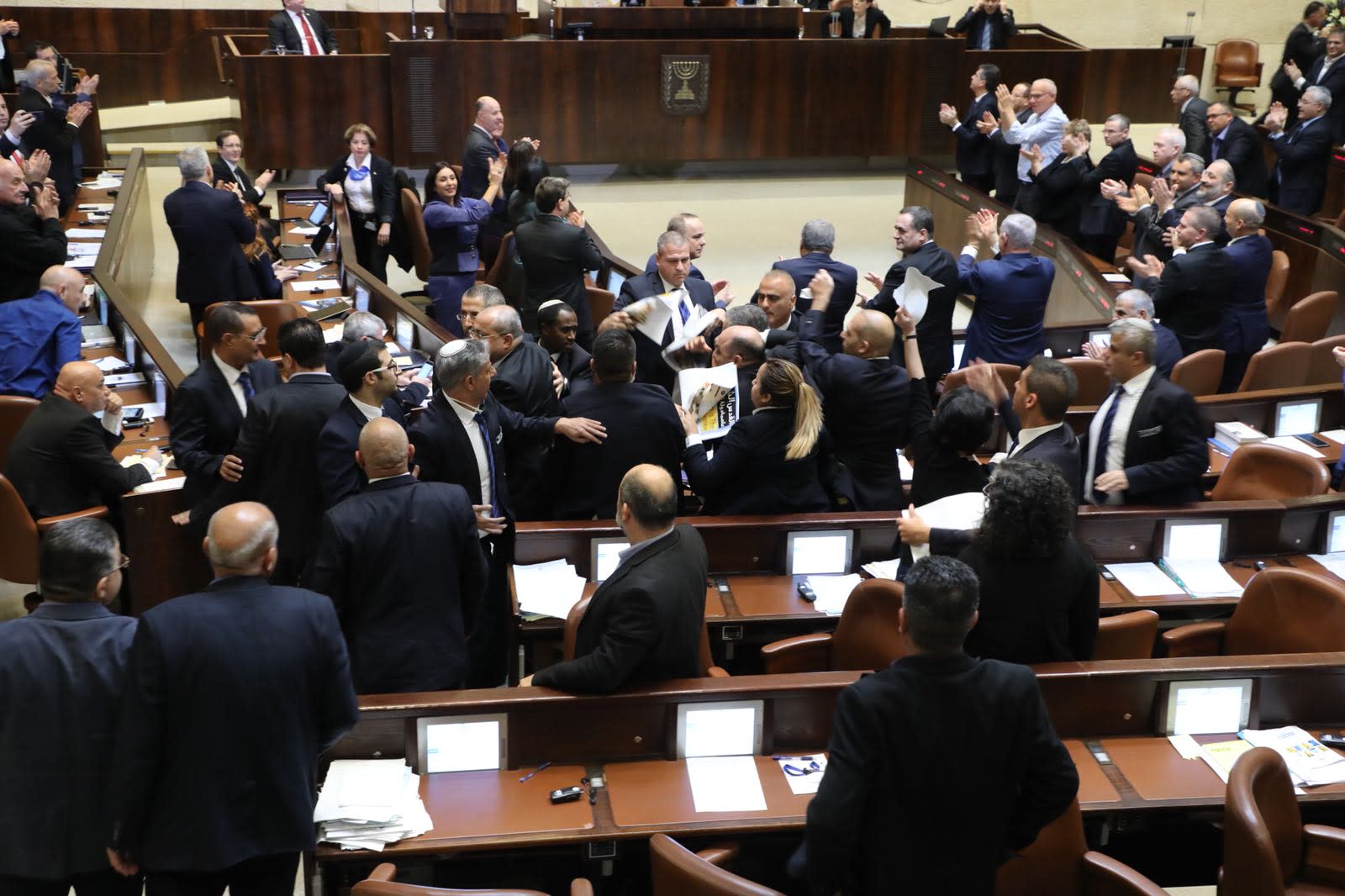 Arab lawmakers disrupt Vice President Pence's speech at the Knesset. (KNESSET SPEAKER'S OFFICE)PENCE SAID the Jewish people held on to the hope of returning to their homeland over a 2,000-year exile, “through the darkest and longest nights.”“Tomorrow, when I stand with my wife, Karen, at Yad Vashem to honor the six million Jewish martyrs of the Holocaust, we will marvel at the faith and resilience of your people, who just three years after walking in the shadow of death, rose up from the ashes to resurrect yourselves, to reclaim a Jewish future and rebuild the Jewish state.”Speaking on Israel’s upcoming 70th Independence Day, Pence recited the last five world of the traditional shehecheyanu blessing, which thanks God for reaching momentous occasions and events. This was met with a standing ovation from nearly all of the MKs present, as were several other points in his speech.The vice president concluded his speech with “God bless the Jewish people, God bless Israel, and God bless the USA.” Likud MK Yehudah Glick shouted: “God bless you, Mr. Vice President!”Netanyahu and Pence, with their wives, met later in the evening for dinner, and in statements to the press before their meeting Netanyahu praised Pence for his words in the Knesset.“From the day I met you, I knew you were a true friend,” he said, characterizing Pence’s speech as “magnificent,” and adding that robust ovations were an applause for “the principles that guide your policies” as well as for the “genuine friendship that emanates from your heart.”Netanyahu said that earlier in the day he and Pence discussed “common challenges and opportunities,” with an emphasis on Iran. Netanyahu said he wanted to salute both Pence and Trump for “standing with the people of Iran” during the protests that began last month, even as “so many in Europe and elsewhere were shamefully silent.”Netanyahu said that when the current regime in Iran falls, and one day Iran’s people will win freedom, “They will remember those who stood with them and those who stood with their oppressors. You are on the right side of history.”Pence used the opportunity afforded before the dinner to address domestic US issues, announcing that the US government shutdown was over, and putting the onus for the shutdown on the Democratic minority in the Senate.”Pence began his first full day in Israel on Monday with a brief welcome ceremony at the Prime Minister’s Office, followed by a private meeting with Netanyahu, and then a meeting with the larger staffs.Welcome to Jerusalem, “capital of Israel,” Netanyahu told Pence at the start of their meeting. He said that over the years he has had the privilege of welcoming hundreds of visitors to Israel’s capital, but that this “is the first time that we both can say the words, ‘Jerusalem, the capital of Israel.’”Netanyahu, who thanked Trump a number of times throughout the day for his “historic declaration” of Jerusalem as Israel’s capital, said that US-Israel relations have never been stronger.The vice president is slated on Tuesday to meet President Reuven Rivlin, tour Yad Vashem, and then go to the Western Wall before leaving in the afternoon.