Percent of ultra-Orthodox in workforce doubled since 2008, Economy Ministry finds

Minister of the Economy and Shas chairman Aryeh Deri says he hopes the study will encourage employers to hire haredi employees and help overcome prejudices. 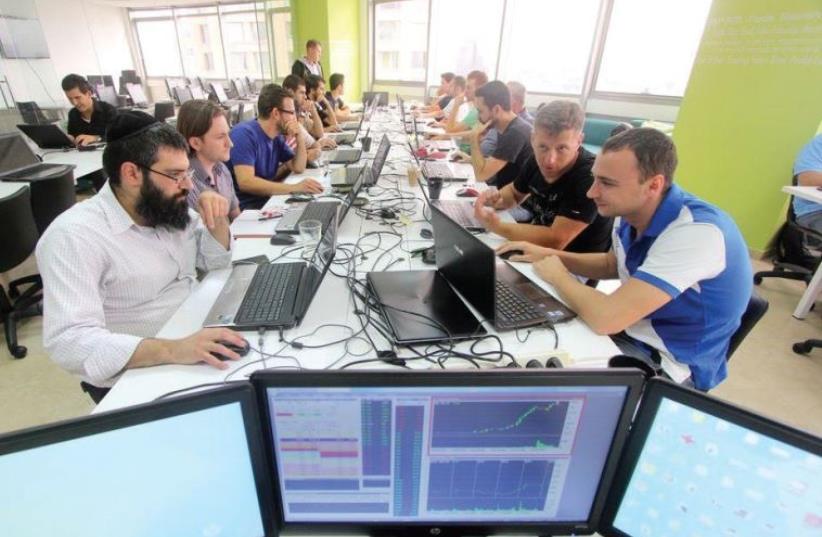 A haredi man trades stocks in Simple Trade’s shared workspace in Ramat Gan
(photo credit: SIMPLE TRADE)
Advertisement
The Economy Ministry announced this week that new figures from a study it conducted show that the number of ultra-Orthodox employees in the business sector has doubled since 2008, from 8 percent to 16% of workers.According to the study, which surveyed 505 businesses, there were 101,000 haredi (ultra-orthodox) employees in the business sector in 2014, compared to 48,500 in 2008.The study looked at the opinions of business owners toward their haredi employees and examined the employer-employee relationship, and the particular dynamics of companies owned by non-haredi people and their ultra-Orthodox workers.The study found that 67% of businesses employing ultra-Orthodox employees have secular owners, while 62% of the ultra-Orthodox employees in the business sector were employed by secular employers.Asked to list the reasons for employing haredi workers, 96% of business owners said that the main reason was related simply to their need for employees, regardless of the sector of population from which they come.Additionally, 24% of those employing ultra-Orthodox workers said that the reason for giving them employment was because they were good and devoted employees, while 13% said that they had previous successful experience in employing workers from this sector.Only a small minority of the employers said they made special accommodations for haredi employees. Just 10% of the businesses with ultra-Orthodox employees provided separate work spaces for women and men. However, 18% of businesses employing haredi workers gave them time for prayer, and 13% set aside a special place for prayer.The study also examined the opinions of business owners and employers who do not currently employ haredim and asked them to list their reasons.Almost 50% of them said they were concerned they would have to separate men and women in the office if they took on haredi staff; 25.2% said the lack of education and relevant skills deterred them from employing ultra-Orthodox people; 20.2% said they were concerned about providing facilities for prayer or kosher food; and 17.9% said they were open on the weekend, including Shabbat, which would exclude them employing ultra-Orthodox staff.Economy Minister Arye Deri (Shas) said he was “hopeful that the study will encourage employers to try employing workers from the ultra-Orthodox sector and overcome the views and prejudices that sometimes create a barrier.”Michal Tzuk, the Economy Ministry’s deputy director-general and employment director, said the issue of increasing employment rates within the ultra-Orthodox community was of “critical importance” for the ministry, which she said is working to remove barriers to the employment of haredi men and women.“Integration of the ultra-Orthodox into the workplace is critical to both the ultra-Orthodox community itself and to the Israeli economy, and we hope that the employers’ high level of satisfaction from this sector will encourage more employers to open their doors and integrate another sector into the labor market.”The latest figures published by the Central Bureau of Statistics showed that 56% of haredi men between the ages of 25 and 64 were employed, compared to 90% of non-haredi Jewish men.Haredi women have a much higher rate of employment, with 70% of ultra-Orthodox women employed compared to just under 80% of non-haredi Jewish women.