Peres released from hospital, can't wait to get back to work

"I was very touched by the greetings and the words of encouragement," former president says as he leaves Sheba Medical Center. 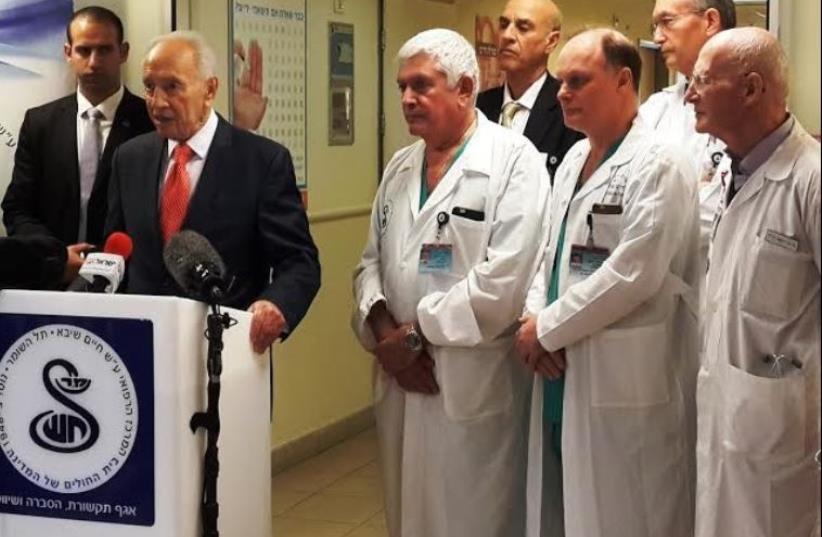 Shimon Peres leaves Sheba Medical Center after five days of treatment for minor heart attack
(photo credit: SHIMON PERES SPOKESMAN)
Advertisement
Former president Shimon Peres was released from the hospital on Tuesday morning after having suffered a minor heart attack last week.While exiting the hospital Peres said, "I've just had five fascinating days. I'm very pleased to be getting back to work, there is a lot of work to do, that was the goal of my healing."Peres thanked the staff at Sheba Medical Center at Tel Hashomer for treating him.The former president also addressed the security situation in Israel, sending his condolences to the family of Dafna Meir, killed in a stabbing attack in Otniel on Sunday and wishing a full recovery to Michal Froman, who was stabbed and seriously wounded in an attack in Tekoa on Monday.Peres thanked everyone who had sent him greetings to get well. "I was very touched by the greetings and the words of encouragement, from the phone calls from all overt he country. Citizens, it touched me very much, this love, this support."Peres suffered a mild heart attack Thursday morning and was rushed by ambulance from his Tel Aviv home to the hospital where he underwent a catheterization process. By the afternoon he showed signs of recovery and was impatient to get back to work, but doctors insisted that he remain under observation. On Saturday they permitted him to walk around and were amazed at the speed with which he was back to his usual self.Peres is a workaholic whose drive and energy keep him alert. The heart attack was ill-timed in that it prevented Peres from attending the World Economic Forum Conference in Davos, which opens on Wednesday.Veteran Peres aide Yona Bartal told The Jerusalem Post that Peres will spend the next few days resting at home, adding that he has made excellent progress and feels fine. However, he will not travel abroad in the foreseeable future.