Peres’s body will lie in state from 9 a.m. to 9 p.m., and tens of thousands of Israelis, in addition to politicians and foreign dignitaries are expected to attend.

By LAHAV HARKOV
SEPTEMBER 29, 2016 06:42
Coffin of Shimon Peres outside Knesset. REUTERS
Advertisement
Former president Shimon Peres’s casket was placed outside the Knesset so that the public may pay its last respects on Thursday.Prime Minister Benjamin Netanyahu, President Reuven Rivlin and Knesset Speaker Yuli Edelstein laid wreaths, but the public will not be allowed to leave anything by Peres’s coffin.Peres’s body will lie in state from 9 a.m. to 9 p.m., and tens of thousands of Israelis, in addition to politicians and foreign dignitaries, as well as Jewish and Arab youth participating in Peres Center for Peace programs, are expected to attend. Prime Minister Benjamin Netanyahu lays a wreath at former President Shimon Peres's coffin outside the Knesset. MARC ISRAEL SELLEMThe public is asked to arrive without weapons or bags and may park for free in Ammunition Hill, the First Station, Teddy Stadium, the Biblical Zoo, the Malha Railway Station lot, the Park and Ride lot outside Modi’in and the Modi’in Outskirts Railway Station, where there will be free shuttles to the Knesset.On Wednesday afternoon, the flags outside the Knesset were lowered to half-mast as a sign of mourning, and all Knesset committee meetings for the rest of the week were canceled.President Reuven Rivlin cut short his state visit to Ukraine to return to Israel to participate in the funeral of his predecessor.Peres memorial at the Knesset. AMOS BEN GERSHOM, GPORivlin flew home on Wednesday evening. On Tuesday, when appearing before the Ukrainian parliament, Rivlin, after speaking about the 1941 Babi Yar massacre, concluded his address by saying his thoughts and prayers were with Peres.He noted that in the course of his last visit to Ukraine, Peres had worked to advance a trade agreement between Israel and Ukraine. 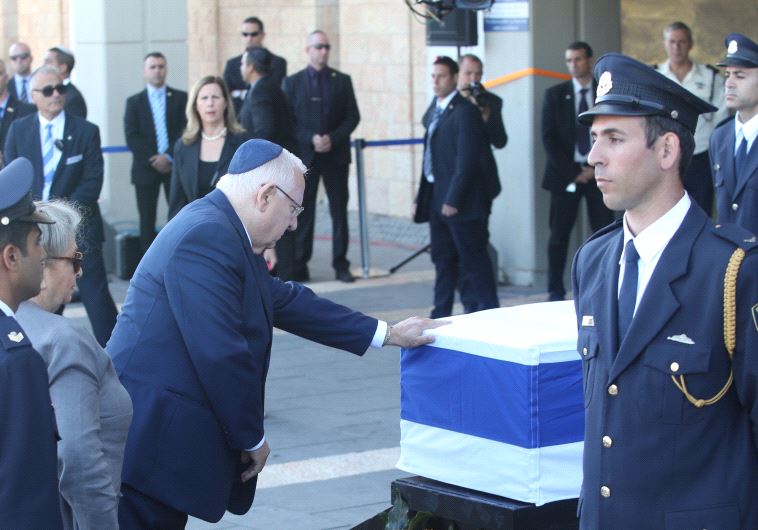 After receiving the sad tidings that Peres had died, Rivlin said: “He was one man who carried a whole nation on the shoulders of his imagination and the wings of his vision.He was the symbol of the great spirit of our people. He forced us to look far, to look forward – and we loved him for that – not for what was, not for what is, but for what could be.”Motorcade carrying the coffin of Shimon Peres. COURTESY ISRAEL POLICERivlin stated that he would carry with him the wisdom of Peres’s counsel, “which was always given with love and in the spirit of hope and peace.”Harking back to Peres the boy who came from Wiszniew, Poland (now Vishneyva in Belarus) to the Land of Israel, Rivlin said that from the very beginning Peres never stopped working, creating and dreaming, initially for Zionist youth and then for the State and people of Israel.At the flag-lowering ceremony, Knesset Speaker Yuli Edelstein said he visited Peres in the hospital last week, and had been optimistic that he would see him at the ceremony opening the Knesset’s winter session next week.“How else can you feel when you stand next to Shimon Peres, the eternal optimist?” he said.Edelstein pointed out that Peres was an MK for 48 years, expressing doubt that anyone would ever beat that record.“We are saying good-bye not only to someone who is a member of our family; he is the head of our family. He is a person who sought only to contribute throughout his life, and that is how we will always remember him,” the speaker stated. “Peres is the story of the Jewish people and the State of Israel, as a son of Holocaust survivors, an immigrant, a farmer, a man of defense and diplomacy.Peres memorial at the Knesset. MARC ISRAEL SELLEMHe was a giant among national leaders who rose in the last century and an example of a proud Zionist.”Edelstein also lit a memorial candle for Peres at the entrance to the Knesset and recited Psalms in his memory.Opposition leader Isaac Herzog paid tribute to Peres, who he said “will be forever remembered as an icon of Israel’s history, and whose legacy will continue to play a profound role in Israel’s future. 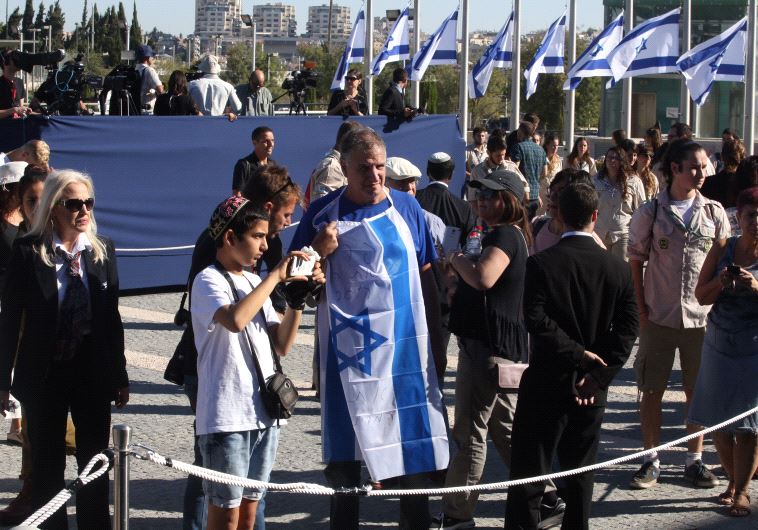 “Peres is one of the greats who shaped the face of Israel throughout its existence. He contributed to Israel’s security and deterrence; he fought resolutely against terrorism; and he relentlessly pursued peace,” Herzog added. “These remarkable contributions, as well as his work toward economic and social empowerment, improving Israel’s international status and supporting Israel as a nation of innovation and courage created a lasting impact to which no words can do justice.”Education Minister Naftali Bennett said Peres “didn’t watch history, he wrote it,” and called himself fortunate to hear Peres’s vision of Israel as a light unto the nations “that would export to the world our greatest product: the Jewish mind.” Bennett recounted being moved when Peres agreed to join his public campaign to encourage the study of sciences.Bennett instructed Israeli schools to dedicate Thursday to Peres’s life and achievements, and called on Jewish schools in the Diaspora to do the same, “so the future generation for whom he fought will know who he was and be inspired by him.” 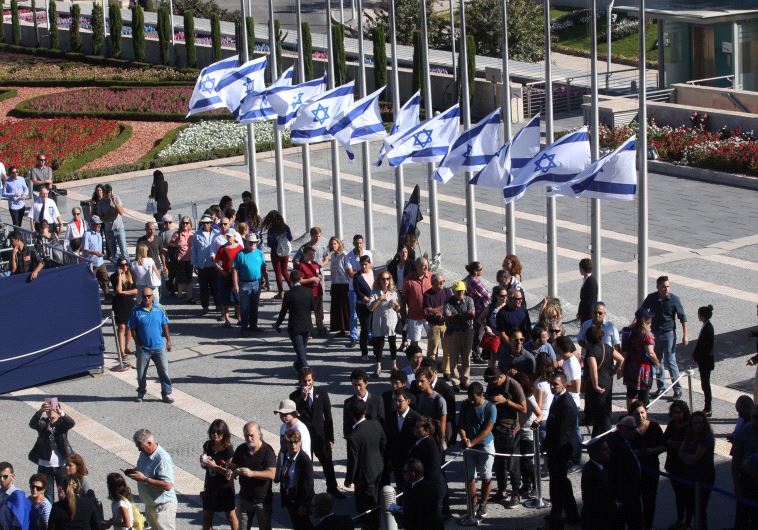 Interior Minister Arye Deri called Peres a true friend, and a man of vision who respected all.“Shimon Peres, of blessed memory, honored and respected those who study Torah. His warm connections with Shas spiritual leader Rabbi Ovadia Yosef, may his merits protect us, are well known. [Peres] would visit [Yosef’s] home before every holiday and ask for his advice and blessing in many areas on his agenda,” Deri recounted.National Infrastructure, Energy and Water Minister Yuval Steinitz said that it’s incomprehensible that the “forever young” Peres died.“Peres’s fingerprints can be felt in every area, and his many years in action are an inspiration forever engraved in our state’s history. Though we did not always agree, it was impossible to ignore his wisdom, understanding, rich language, the many areas in which he had in-depth knowledge and his pleasant manner,” he added.Finance Minister Moshe Kahlon said that Peres “personified the creativity, determination and faith that brought Israel to great achievements in all areas, and he has a place of honor in the national pantheon.”Defense Minister Avigdor Liberman said Peres was one of the “giants” who helped establish the state, adding that despite their political differences, they would meet from time to time to discuss the future of the state, and he will miss Peres.Yesh Atid chairman Yair Lapid said that Peres is always with Israelis, even after his death.“He is here, because we are surrounded by the results of his actions. Our security establishment, the nuclear plant in Dimona, Israeli democracy, our international status are all basic elements on which Israel stands, and he left his unique mark on all of them,” Lapid stated.Meretz chairwoman Zehava Gal-On paid tribute to Peres’s “moral compass, determination and faith in the possibility of peace, which are a true inspiration to every public servant.”In every party in the Knesset, multiple MKs released statements eulogizing Peres, except for the Joint List, which even upon request did not respond to the former president’s death.Several parties and lawmakers canceled their customary pre-Rosh Hashana events planned for this week, in honor of Peres.Greer Fay Cashman contributed to this report.