Peres: We shouldn’t go it alone against Iran

At the Peres Center, Michael Douglas and Natan Sharansky weigh in on BDS threats and nuclear weapons.

By NOA AMOUYAL
JUNE 17, 2015 19:21
Shimon Peres
(photo credit: MARC ISRAEL SELLEM/THE JERUSALEM POST)
Advertisement
Unilateral measures to prevent Iran from obtaining atomic bombs would be counterproductive, former president Shimon Peres said at a Peres Center for Peace lecture on Wednesday.“We must prevent Iran from obtaining a nuclear weapon and it is better to do it with a coalition than alone,” Peres said, in an implicit swipe at Prime Minister Benjamin Netanyahu’s opposition to the deal the world powers are drafting with Tehran.“There’s a coalition that President Obama has built, but it includes the Russians, the Chinese, the Europeans.And if they won’t be in a coalition, then they may take a more sympathetic side to Iran,” Peres said, emphasizing the need for a diverse and stable team of negotiating powers.Academy Award winner Michael Douglas and Jewish Agency chairman Natan Sharansky joined Peres on stage at the Peres Center in Jaffa, where they weighed in on the obstacles to regional peace and ways Israel can forge ahead.Douglas, who will receive the second annual Genesis Foundation Prize on Thursday night for promotion of a more inclusive Judaism, is no stranger to humanitarian activism. Since 1998, he has been a UN Messenger of Peace, with his focus being on nuclear nonproliferation.It was his work on the 1979 thriller The China Syndrome, about a nuclear power plant meltdown, which inspired Douglas to delve into the nuances of such a complex topic.The road to negotiations is a perilous one and should be navigated carefully, Douglas said.“From my experience the biggest problem in the world is nuclear weapons. However, I am optimistic when I look at former president Peres. I know that the world can lead to good directions, but I’m still very concerned,” he said.Douglas called for UN involvement to help manage the crisis, warning: “We have certain treaties which should be remembered and put in place... [to] try to put this genie back in the bottle. We do not need any other countries with nuclear weapons.“Clearly, if the Middle East got into a situation where Iran continued to develop a nuclear weapon, Saudi Arabia would have a very easy option of calling up Pakistan [for help] and we could just go on from there,” he said, cautioning that a nuclear Iran could lead to an amped-up arms race in the region.The lecture, organized in conjunction with the Genesis Prize Foundation and the Jewish Agency, highlighted the three men’s commitment to peace.The trio also weighed in on the Boycott, Divestment and Sanctions movement.To effectively combat this movement that “systemically attempts to delegitimize Israel,” the country must increase Birthright enrollment among young Diaspora adults and send more emissaries to foreign college campuses, Sharansky argued in front of an audience of mostly Birthright and Masa participants.“We must remember, the real aim of our enemy is not to weaken Israel economically – that’s impossible – but it is to disengage Jewish people from Israel. To make them embarrassed of their connection to Israel,” Sharansky cautioned.Peres slammed the phenomenon, calling it an “anti-peace movement,” and charged BDS proponents with impeding the progress for a solution to the Arab-Israeli conflict.“You either you boycott and don’t talk, or you talk and don’t boycott,” he said.When Douglas was asked what he would say if invited to address the Knesset, he said addressing the threat of the BDS movement would be a top priority. “I am very concerned about the attempts of boycotting Israel and I am not comfortable with the response at the moment.”Since last summer’s Operation Protective Edge against Hamas in the Gaza Strip, voices within the US entertainment industry against IDF actions have grown.Douglas reassured the audience, though, that there is still strong support within Hollywood for the Jewish state.“I don’t know if you could ever influence an entire industry,” he began, when asked if his standing within the Hollywood community could result in greater goodwill toward Israel.Despite artists such as Selena Gomez and Rihanna tweeting support for the Palestinian cause, Douglas poured cold water over claims that the tide has started to turn regarding support for Israel.“Our industry has been very supportive toward Israel....There may be individual voices coming up, but inherently and historically, our industry is a tremendous supporter of Israel,” he said.He did suggest, though, that it would behoove Israel to formulate a coherent narrative to broadcast to the world. “I would ask them... what is the narrative of Israel? I don’t know it exactly,” he said. “I think some of our adversaries have defined a clearer narrative than Israel has.... I hope they can come together to form a clear message that they can show to the rest of the world.” 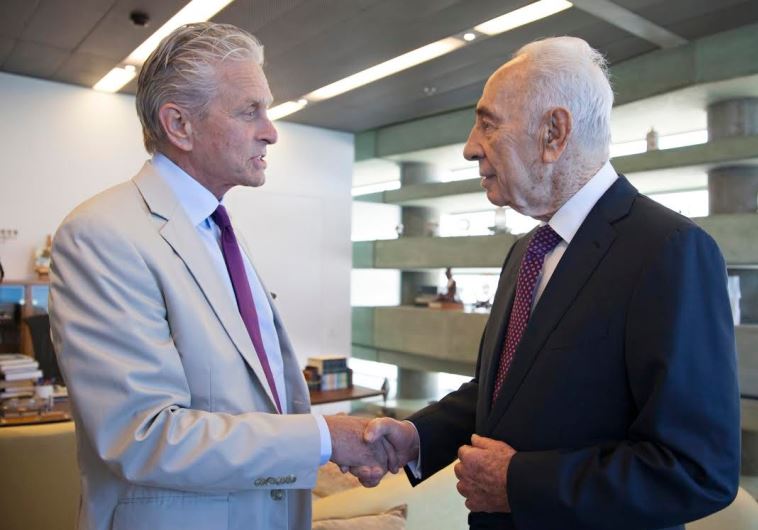