“It starts with sports, but it won’t end there,” Harvard Prof. Alan Dershowitz warned. “We won’t allow the Jewish state to be treated like it’s a second-class country.” 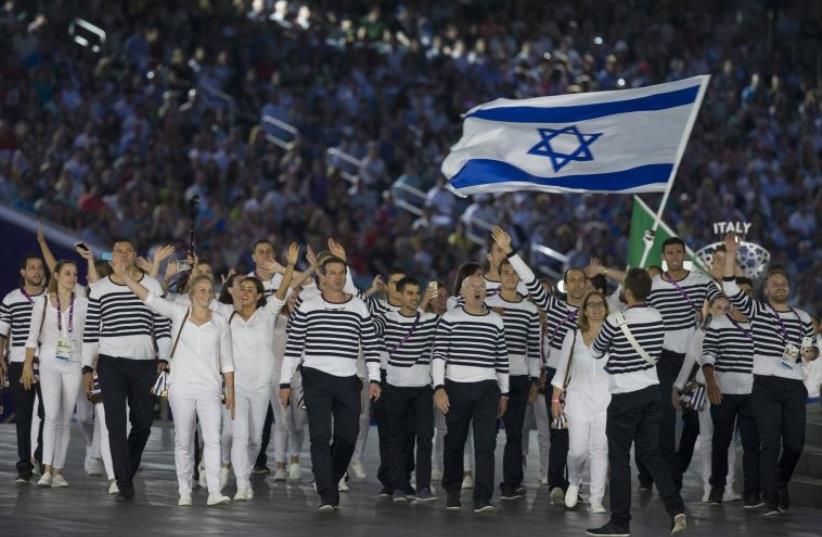 Members of the Israeli delegation parade during the Opening Ceremony of the 2015 European Games at the Olympic Stadium in Baku
(photo credit: JACK GUEZ / AFP)
Advertisement
A team of leading international jurists, including Harvard Prof. Alan Dershowitz, plan to petition the international Court of Arbitration for Sport against the exclusion of Israel’s flag and anthem at sporting events in Arab countries.“It starts with sports, but it won’t end there,” Dershowitz warned. “We won’t allow the Jewish state to be treated like it’s a second-class country.”Yesh Atid MK Yoel Razbozov, a former Israeli judo champion who launched the initiative, said: “When I saw Israeli athletes having to compete in Arab countries without an Israeli flag, without the anthem and without any Israeli symbol, as a former Olympic athlete and a member of Knesset, it drove me crazy.“This is a national humiliation and a surrender to terrorism,” the lawmaker added. “The Arab world is trying not to recognize Israel through sport.”The legal team is led by Dershowitz, former New York State Attorney-General Dennis Vacco, and lawyer Jon Purizhansky. Their efforts follow multiple events in which Israeli athletes could not display the flag on their uniforms and the national anthem was not played when they won. Razbozov also sought advice from Efraim Barak, an Israeli attorney who is an expert on sports and law and an arbitrator at the Court of Arbitration for Sport, and other Israeli and Swiss lawyers will take part in the efforts.Dershowitz said he agreed to take part in the effort after Razbozov told him about the incidents, and that he hopes to bring an end to discrimination against Israeli athletes.“We have to fight this discrimination on every front – legal, diplomatic, political and even economic. We have to make sure this discrimination won’t have sponsors and funders,” Dershowitz said. “If we don’t stop this, the phenomenon will enter all areas of our lives.”Yesh Atid chairman Yair Lapid, who supports the initiative, said, “No country in the world would be willing to have its athletes hide its flag and anthem. Israel must demand that international sport associations and athletes around the world take part in our struggle. Today it’s Israel, tomorrow it could be another country.”