The growing Gur hassidic community in Arad has fought a legal battle with the municipality for over a year regarding premises for a synagogue. 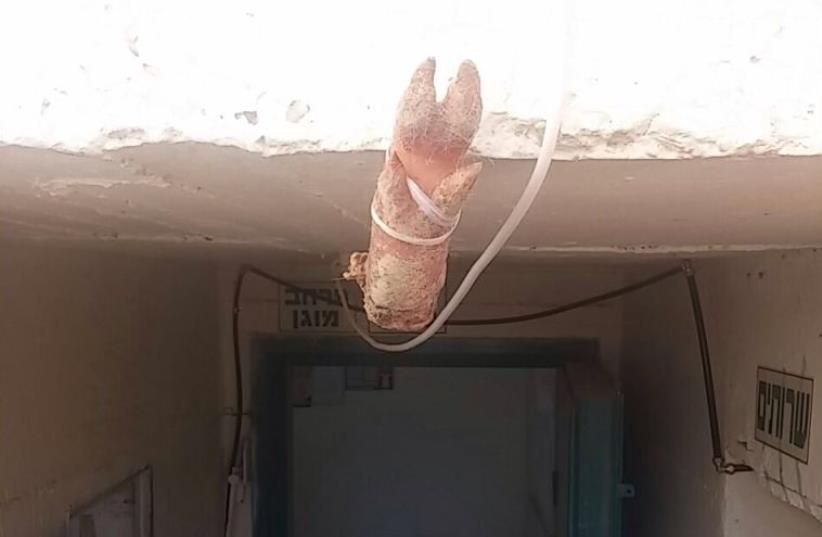 A pig's foot hung outside a synagogue in Arad
(photo credit: Courtesy)
Advertisement
A pig’s foot was hung at the entrance to a hassidic synagogue in Arad early Tuesday, an incident that comes against a background of inter-communal tensions in the southern city as the growing Gur community fights a legal battle with the municipality for more than a year regarding premises for a synagogue.Police said Wednesday they are investigating the incident.The community initially began praying in an unused school in the city but the municipality objected and demanded that the community cease to use the school as a synagogue.The two sides entered into a dialogue to find a resolution and it was eventually agreed that the Gur community would leave the school and the Arad municipality would provide two other locations to serve as synagogues.The first site designated was supposed to be handed over two months ago, but the municipality stalled for several weeks until the Gur community secured a court order instructing the municipality to make the site available to the hassidic group less than a month ago.The hanging of the pig’s foot at the entrance to the synagogue is the second such incident, after a pig’s head was placed at the entrance to the house of Rabbi Tzvi Bialistosky, one of the community’s leaders.The Gur community alleges that incitement against the hassidic residents of the city has led to these incidents.Mayor Nissan Ben-Hamo was elected in special elections in July after previous mayor Tali Ploskov entered the Knesset with Kulanu. The election witnessed fierce rhetoric between the haredi and secular political parties and representatives.On election day itself, Ben- Hamo’s staff issued an SMS saying: “Thousands of Gur hassidim are streaming to the polls,” in order to urge the city’s secular residents to get out and vote.A spokesman for the municipality denied it had any connection to the incident, saying Ben-Hamo had denounced it and called on police to investigate the apparent hate crime.