The debated establishment of the new Israel Broadcasting Corporation has led to disarray within the government. 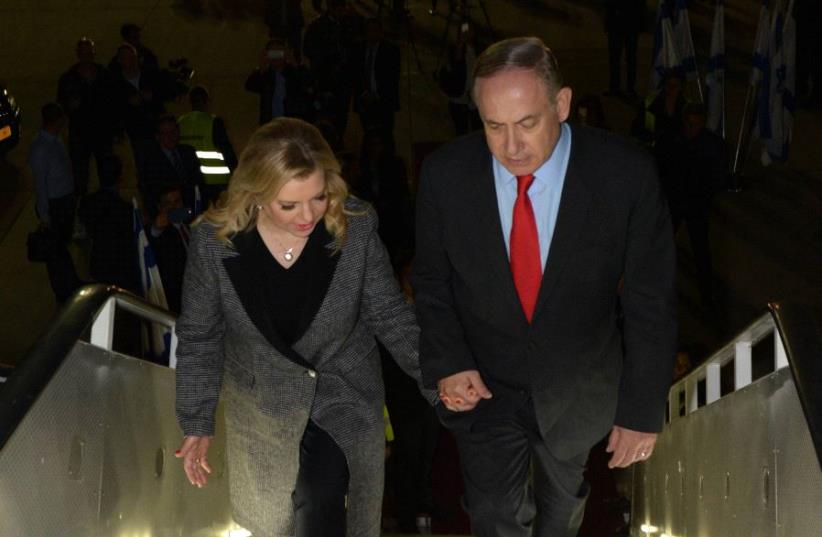 Netanyahu departs to China
(photo credit: CHAIM ZACH / GPO)
Advertisement
Prime Minister Benjamin Netanyahu flew to China on Sunday morning for an official state visit amid a burgeoning coalition crisis that threatens to dissolve the government.Before departing, Netanyahu said, "we are going to mark 25 years since the establishment of relations between Israel and this great power."
Netanyahu departs to China (credit: GPO)
Netanyahu also mentioned that Israel is in high demand, "which you can learn from the recent visits to Washington, Moscow and several other nations, and now also China."The trip comes amid a coalition crisis that has spurred talk of early elections with regard to a contentious debate over the establishment of the new Israel Broadcasting Corporation (IBC). Netanyahu has fought against the IBC, which would replace the Israel Broadcasting Authority (IBA) and operate under less government control.Netanyahu responded to the crisis by saying that the government is based on coalition agreements, among them "it was explicitly determined that all parties are obligated to decisions made by Likud, our [party], the subject of communications, including the closure of the corporation."Netanyahu reiterated remarks he made on Saturday night in which he said that the cost of operating the IBA is less than it would be with the new public broadcaster. "To send hundreds of families home on the eve of Passover, for what? There can be no situation where we, the Likud, with 30 mandates respect all the clauses for smaller parties."Netanyahu on Saturday night retracted last week’s agreement with Finance Minister Moshe Kahlon to establish the new Israel Broadcasting Corporation, throwing his coalition into crisis. Hebrew media meanwhile reported that Netanyahu threatened to dissolve the government if Kahlon does not agree to shut down the IBC before it is officially launched on April 30.“I changed my mind after a meeting I had yesterday with the employees of the Israel Broadcasting Authority,” Netanyahu wrote on his Facebook page on Saturday. “At the meeting I heard heart-rending stories about dedicated and experienced employees who are being sent home because of the [replacement Israel Broadcasting] Corporation.” Netanyahu’s retraction came after a week of inter-coalition tensions, as Kulanu chairman Kahlon sparred with the prime minister about a proposal for another six-month postponement of the IBC launch. The two men later agreed to support its establishment as scheduled.Meanwhile, Zionist Union chairman Isaac Herzog said that he plans to unseat the government and supports a vote of no-confidence.Eliyahu Kamisher contributed to this report.