“This is one of the most important bills the Knesset has ever considered,” Tourism Minister Yariv Levin said. “It expresses the deep foundations of Zionism on which the state was built.” 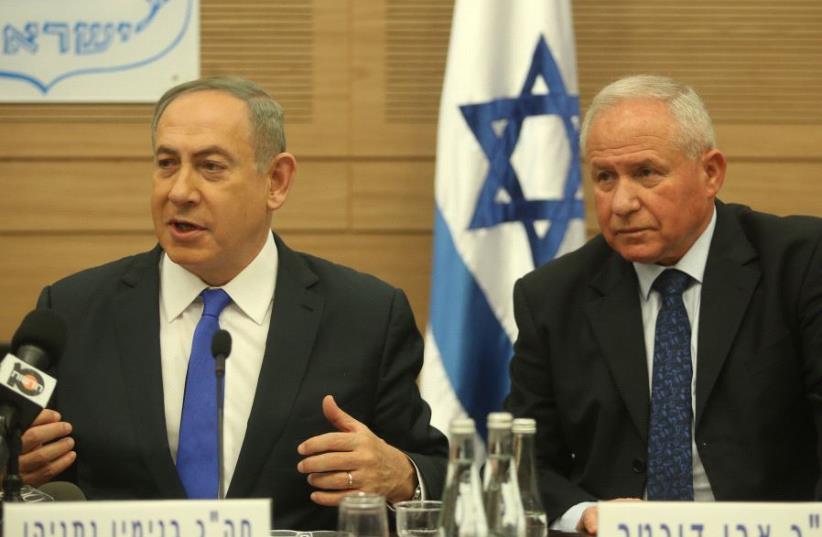 Netanyahu and Dichter at the Knesset Foreign Affairs Committee
(photo credit: MARC ISRAEL SELLEM)
Advertisement
The time has come to complete the process of legislating the controversial Jewish nation-state bill, Prime Minister Benjamin Netanyahu told the heads of the parties in his coalition in a meeting on Monday.The Jewish nation-state bill is a draft Basic Law with constitutional heft that declares that Israel is the nation-state of the Jewish people. It has been on and off of the Knesset’s agenda in various forms since 2011, when then-Kadima MK Avi Dichter, now of Likud, proposed it.The bill was authorized for a first reading in the plenum in March, without some of its most contentious elements, in a last-minute move before the Knesset’s Passover recess. Netanyahu wants it passed in its final readings by the next recess, which begins in July.The bill would also anchor in law the state symbol, Jerusalem as Israel’s capital, the connection with Diaspora Jewry, national holidays, and the right of all Israeli residents to preserve their heritage without difference of religion and nationality.Dichter welcomed Netanyahu’s decision, calling the bill the flagship legislation of Likud. He warned the other parties in the coalition that if they wanted their bills passed, the Jewish nation-state bill must pass first.Tourism Minister Yariv Levin will conduct shuttle diplomacy between party heads on Netanyahu’s behalf this week to draft a final version of the bill that all the parties could support.“This is one of the most important bills the Knesset has ever considered,” Levin said. “It expresses the deep foundations of Zionism on which the state was built."