"The fighters that are standing at the forefront to protect the citizens of Jerusalem and the nation...are ready to respond first and to be in the firing line." 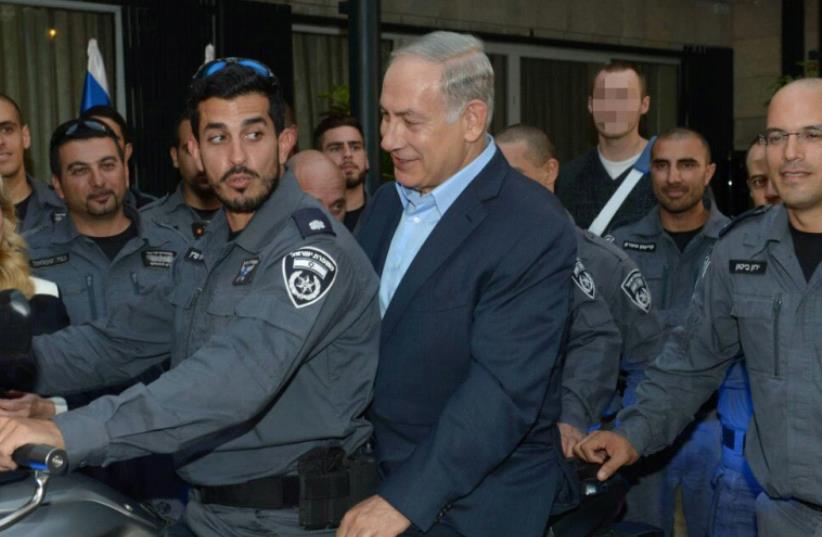 PM Netanyahu with Police special patrol unit officers
(photo credit: PRIME MINISTER'S OFFICE)
Advertisement
Prime Minister Benjamin Netanyahu welcomed the Special Forces Motorcycle unit at the Prime Minister's residence in Jerusalem on Wednesday after one of its members were killed in a terror attack earlier this month. Adv.-Staff-Sgt.-Maj. Yosef Kirma 29 and Levana Malichi, 60, a former Knesset employee, were shot and killed in the capitol earlier this month.Present at the event were Public Security Minister Gilad Erdan, Chief of Police Operations Alon Levavi, officer Kirma's family as well as Sergei Botzikin who was wounded in the terror attack."We are pleased to welcome you all. We want to bless you with happy times and to thank you for the efforts you take for the security of the state," Netanyahu said.Netanyahu hailed the unit's "determination and courage," saying they acted "heroically" during the attack. "And a hero like this was our beloved Yossi...Your family is all our family," Netanyahu added, using Kirma's nickname. Netanyahu also said that Kirma and Botzikin were brothers in arms and wished them happiness after such a tragic event. Erdan at the event said that "the fighters that are standing at the forefront to protect the citizens of Jerusalem and the nation...are ready to respond first and to be in the firing line." Erdan added that "Our sovereignty as a nation was tested in Jerusalem, and they are the ones protecting our sovereignty, guardians of Jerusalem."The terrorist attack on October 9 began near Israel Police headquarters across the street from the Ammunition Hill light rail stop in northeastern Jerusalem and ended in nearby Sheikh Jarrah neighborhood.Daniel K. Eisenbud contributed to this article.