He said that Miguel asked Ben Uliel to remove his yarmulke to avoid causing an incident of public disorder during the reconstruction and that Ben Uliel refused. 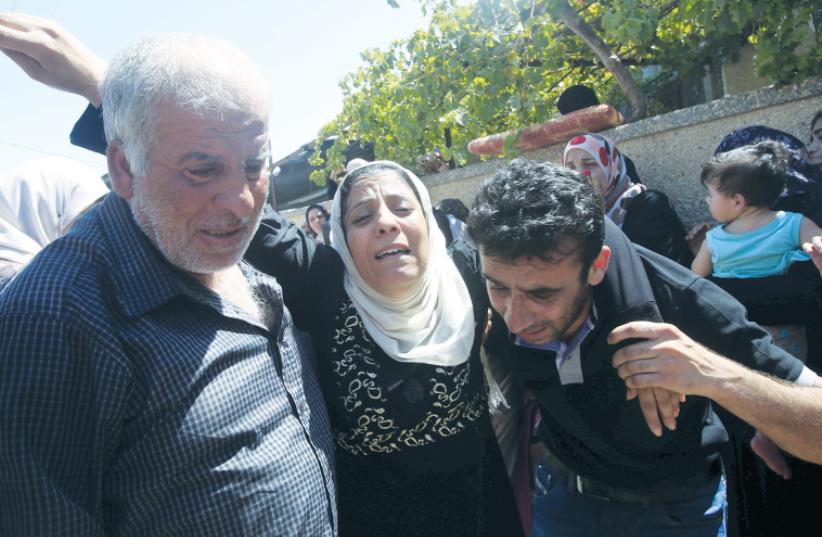 RELATIVES of Sa’ad Dawabsha mourn at his funeral in Duma on August 8.
(photo credit: REUTERS)
Advertisement
Senior police official Erez Amouyel testified on Wednesday at the Lod District Court about alleged Duma murderer Amiram Ben Uliel’s reconstruction on December 20, 2015 of the July 2015 arson attack in which three members of the Dawabshe family were burned to death at their home in the West Bank village of Duma.The reconstruction occurred after Ben Uliel had confessed to the triple murder following enhanced interrogation by the Shin Bet (Israel Security Agency). Ben Uliel and a minor, whose name is under gag order, have argued their confessions were coerced. In June, the court ruled most of Ben Uliel’s confession was valid despite the enhanced interrogation. The court however invalidated most of the confession of the minor.Amouyel told the court that he and Ben Uliel approached the village with a driver, two police investigators, and Shin Bet investigator “Miguel”. Ben Uliel refused Miguel’s request to remove his kippa to avoid causing an incident of public disorder, he said. They walked briefly with Ben Uliel to the burnt Dawabshe house in the village center.Amouyel described how Ben Uliel recounted how he burned the Dawabshes to death. The police official added that prior to conducting the reconstruction of the crime with Ben Uliel, he had not been told what the suspect would say, and only knew he had confessed.Ben Uliel’s lawyer, Ashe Ohayon, repeatedly objected to Amouyel’s testimony, arguing the content of his testimony had not been fully disclosed. Regardless, he argued, police had submitted a summary of the reconstruction which made Amouyel’s testimony superfluous.The court eventually asked state prosecutor Yael Atzmon to move on to other aspects of Amouyel’s testimony.When Ohayon cross-examined Amouyel, he sought to convince the court that police had illegally planted details for him to share during the reconstruction.Police procedure for conducting a reconstruction requires that the officers carrying out the reconstruction know few details of the crime, and allow the defendant to share what they know without undue influence.Ohayon and Amouyel clashed over whether Amouyel had remained as ignorant of the case’s details as he claimed, and about whether he had influenced Ben Uliel.Ben Uliel’s lawyer sought to undermine the credibility of Amouyel’s testimony by tripping him up about details of the case. These included disputes about footprints in the area, whether the minor was present during the arson or merely helped plan the crime, and details relating to an alleged vehicle used to drive to and from Duma by the perpetrator.