He is also accused of receiving benefit, including sexual favors, from Palestinians for whom he helped obtain entry visas to Israel for illicit business purposes. 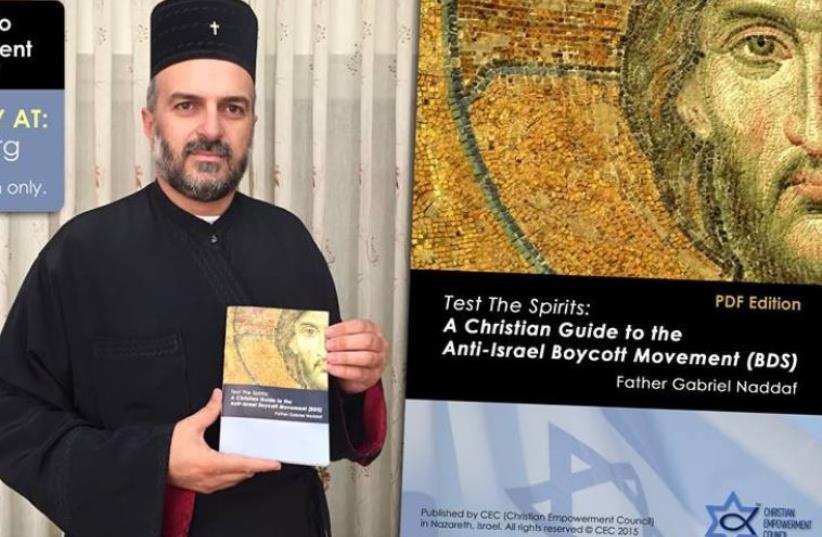 Father Gabriel Naddaf
(photo credit: FACEBOOK)
Advertisement
The police are determining whether or not to open an investigation into Greek Orthodox priest Father Gabriel Naddaf, who is accused of having sexually harassed youths during telephone conversations and electronic correspondence he held with them.Naddaf has been a high-profile proponent of Christian Arab enlistment to the IDF, and the allegations made against him were made by youths from the sector who had sought his help and advice.He is also accused of receiving benefit, including sexual favors, from Palestinians for whom he helped obtain entry visas to Israel for illicit business purposes.The priest is scheduled to take part in a torch-lighting ceremony at the beginning of Independence Day on Wednesday night because of his efforts towards Christian enlistment and integration.“Some of the claims have been brought to the attention of the police, and they, along with the content of the publications on the matter, will be examined by professionals in the Investigations and Intelligence Department,” the police announced on Monday.Naddaf once again insisted on Monday that he was innocent, telling Army Radio, “The only truth is that I have not harmed anyone, and I haven’t exploited my position to gain benefit from anyone. I will light a torch on Independence Day.”Culture Minister Miri Regev, chairwoman of the committee that selected the honorees for the Independence Day ceremony, issued a statement on Monday night saying that everyone had the right to be presumed innocent until proven otherwise, and that in accordance with legal advice she had received, she would not intervene on the matter until law enforcement agencies say otherwise.Speaking to The Jerusalem Post on Monday, a former associate of Naddaf’s was critical of the cleric for how he has run the campaign for Christian enlistment, but would not comment on the allegations other than to say that he had heard similar rumors in the past.Shadi Halul, a founder of the Israeli Christians Recruitment Forum that Naddaf now runs, said the priest had sought to attract media and political attention which he said had been detrimental to the cause of Christian enlistment “We established the principles and the path for Christian enlistment to the IDF. He wasn’t in the picture,” said Halul. A person needs to give credit to others, to people who worked hard for these goals before he even started. Anyone who seeks honor will have honor depart from him, and that is what has happened here.”Halul said the allegations against Naddaf had, in the short term, done “severe damage” to the cause of Christian enlistment to the IDF and integration into Israeli society, but said that he and others would be “faithful to Christian values and continue this campaign for the good of the State of Israel.He added that he and others were “saddened by the accusations, but hope that he is proved totally innocent."Naddaf appeared on Monday at the Knesset’s annual pre-Independence Day luncheon for the torch lighters, where public relations staff attempted to stop him from speaking to the press.MK Ksenia Svetlova (Zionist Union) called on Regev to admit she made a mistake in backing Naddaf and called for her to wait for the police’s recommendation before honoring Naddaf.“There is no lack of Christians who are clean of any stain and serve in the IDF,” Svetlova said.“Many of them were horrified when they heard Nadaf was chosen, because whoever chose him did not do the minimum research and check his background.”MK Tamar Zandberg (Meretz) called on Attorney-General Avihai Mandelblit to immediately investigate Naddaf, saying “Regev is setting a new standard of hypocrisy, backing sex criminals if they serve the Right.”According to Zandberg, Regev “prefers to shame the ceremony and the whole state rather than come out against Naddaf, who she encouraged for years.”