‘Obviously, the challenges in Jerusalem are different than in Tel Aviv, where there are more criminal-related incidents than terrorism’ 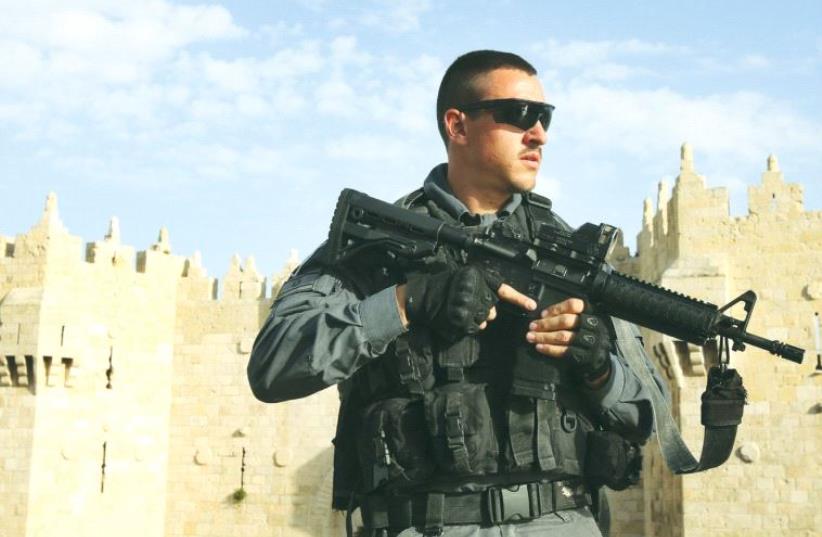 A BORDER POLICE officer patrols the area outside the Damascus Gate of Jerusalem’s Old City recently.
(photo credit: MARC ISRAEL SELLEM)
Advertisement
Nearly a year into an unpredictable terror wave that has sporadically engulfed the capital – necessitating extraordinary security measures – the Israel Police is struggling to enlist 1,200 recruits to serve in Jerusalem, in addition to the 3,500 officers presently on the ground.Channel 10 reported this week that only 200 recruits had agreed to be stationed in Jerusalem despite a recruitment campaign offering extra benefits, due to the pronounced dangers and challenges inherent to patrolling the volatile capital.However, according to Police spokesman Micky Rosenfeld, recruiters have routinely faced challenges enlisting officers in the city, which is why incentivized packages have always been offered.“In the Israel Police, there are a number of different areas where people can serve, but the units that have opened up [in Jerusalem] are special patrol and undercover units on the front lines, and that type of work is, of course, very intensive,” Rosenfeld said on Thursday. “So, when you open up hundreds of positions for specialized units that work day and night shifts 24/7, including during Shabbat and holidays, it’s not easy to recruit people. It’s not easy in general to recruit people for the Israel Police.”Moreover, Rosenfeld said the process of selecting elite officers to serve in Jerusalem was markedly slower compared to other areas of the country because it required recruits to pass a battery of demanding physical and psychological tests.“It takes time to enlist in the police,” he said. “You have to go through a rigorous process, which can take weeks or months. And most people want to work 9 to 5 shifts, so it’s difficult to recruit when they’re occasionally asked to serve consecutive shifts, and on the weekends and during festivals.That’s not something everyone wants for obvious reasons, which is why special packages are offered.”Indeed, due to the intense nature of policing Jerusalem, Rosenfeld said that offering benefits was standard procedure.“The benefits are offered to help support officers working on the front lines in Jerusalem because even when they get home from a shift, they may be called in again if a major incident or attack takes place,” he explained.Rosenfeld added that the Channel 10 report had been blown out of proportion, as there was nothing novel about the difficulty in recruiting officers to the capital.“Obviously, the challenges that exist in Jerusalem are different than in Tel Aviv, where there are more criminal-related incidents than terrorism, which is why it’s more challenging to recruit here,” he said.“An officer who goes on a horse-patrol shift on the beach in Herzliya looking for petty crime or stolen water bottles from a bag, faces far different challenges than an officer having petrol bombs thrown at him while patrolling Silwan or Isawiya [in east Jerusalem]. So you have to put that into perspective.”