Breaking the Silence CEO Yuli Novak said that this move will not intimidate the NGO from continuing their actions. 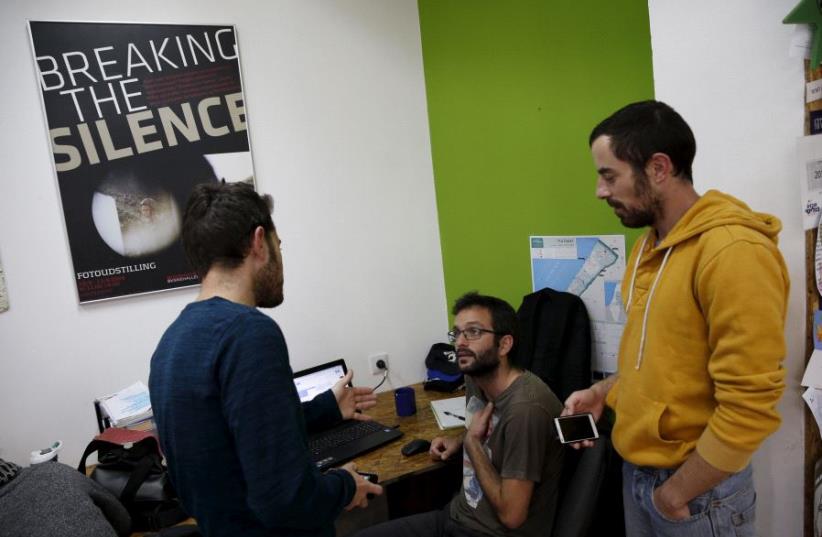 Employees work at the offices of "Breaking the Silence" in Tel Aviv, Israel
(photo credit: REUTERS)
Advertisement
Police questioned Dean Issacharoff, spokesman for the left-wing Breaking the Silence group, for an hour and a half on Thursday on suspicion of assaulting a Palestinian in Hebron during his military service.Issacharoff’s attorney, Gaby Lasky, said the spokesman repeated the statements he had made during a videotaped speech in which he said he committed the assault.“If they are really interested in stopping violence in the territories, then Dean is not the only address they should investigate,” Lasky told The Jerusalem Post. “They should investigate the people who draw up the policy regarding the occupation and send the soldiers out.”Earlier this month, Justice Minister Ayelet Shaked called on the Attorney-General’s Office to open an investigation into possible war crimes committed by Issacharoff.Her request followed the surfacing of a video, published by right-wing NGO Reservists on Duty, in which Issacharoff claims to have beaten a Palestinian youth while he was an IDF officer years ago.Attorney-General Avichai Mandelblit said on Friday that he had ordered a criminal probe of Issacharoff after being asked to by the military advocate- general.The IDF’s top lawyer cannot prosecute Issacharoff now that he is out of the army, but often the IDF legal division coordinates with the state prosecution regarding any allegations that relate to someone who is now a civilian, but was a soldier at the time the allegations took place.Mandelblit denied that Shaked or any political pressure had led to the probe, though he admitted that the minister was one of several parties who had asked for an investigation of Issacharoff.Previously, Breaking the Silence said Shaked’s call to probe Issacharoff was a witchhunt intended to chill criticism of Israel and that it showed hypocrisy at a time when Israel is not prosecuting a range of alleged war crimes relating to the 2014 Gaza war (Operation Protective Edge) and other recent operations.Breaking the Silence CEO Yuli Novak said that this move will not intimidate the NGO from continuing their actions.“We are going all the way, until the occupation regime collapses,” she wrote on her Facebook page.“Investigations are not intimidating us, but the continuity of the occupation and the moral corruption it brings with it do.“You can ask the attorney- general to summon more activists from Breaking the Silence,” she added. “They have a lot to tell. I promise they will not remain silent – and this is the exact opposite from what you and your friends want.”Meretz chairwoman Zehava Gal-On criticized the decision to open an investigation of Issacharoff.“Ayelet Shaked turned the law enforcement authorities into [another branch of the rightwing NGO] Im Tirzu,” she said in a statement.“The police should not conduct political investigations following a directive from a minister,” she added. “The attorney- general and the state attorney, who are acting like spineless cowards when investigating the prime minister’s corruption cases, suddenly become big heroes over a young guy who explained how the occupation is being carried out.”Yonah Jeremy Bob contributed to this report.