"May he be strong and very courageous for the security of the people of Israel, our land and our state." 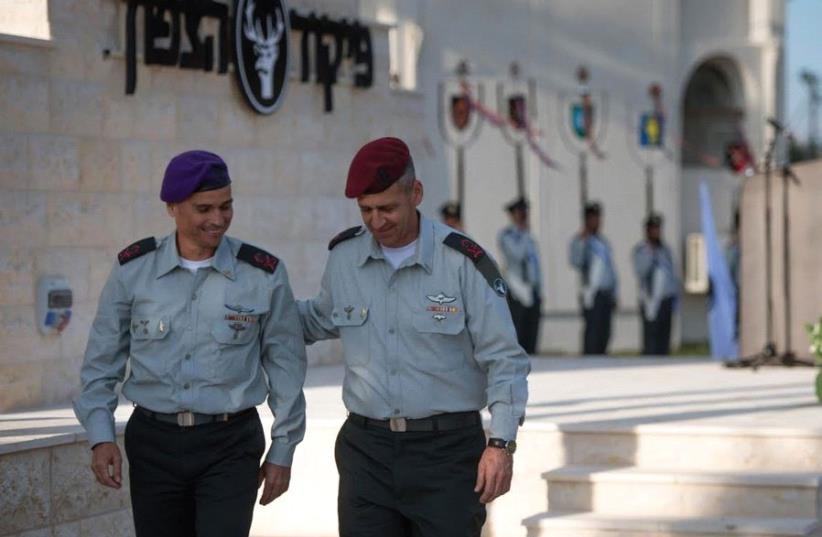 MAJ.-GEN. YOEL STRICK (left) walks with his predecessor at the Northern Command, Maj.-Gen. Aviv Kochavi, at the unit’s headquarters in Safed yesterday.
(photo credit: IDF)
Advertisement
Israeli politicians welcomed Maj.-Gen Avi Kochavi as the new IDF chief of staff on Friday, shortly after Minister of Defence Avigdor Liberman made the announcement.Culture and Sports Minister Miri Regev expressed that she had great confidence in Kochavi's abilities to fill the post."I congratulate Maj.-Gen. Aviv Kochavi on his appointment to the position of the 22nd chief of staff of the Israel Defense Forces. The IDF has complex tasks and great challenges, and I am certain that Maj.-Gen. Kochavi will succeed in meeting them," Regev said."Kochavi is both powerful and a family person."Member of the Foreign Affairs and Defense Committee MK Moti Yogev said: "I am happy to see Maj.-Gen. Aviv Kochavi as the next Chief of Staff of the Israel Defense Forces. He is strong and courageous.""I was privileged to be the commander of Lieutenant Aviv Kochavi [and...] I was impressed by him throughout the years and the many roles he filled," he added."All that remains to say is to congratulate him and his family. May he be strong and very courageous for the security of the people of Israel, our land and our state."MK Ofer Shelah, also member of the Foreign Affairs and Defense Committee, added: "I know Aviv Kochavi from our childhood in Kiryat Bialik until today. He is a talented man and an original, daring and experienced commander.""No one is more suitable than him to lead the IDF in the tremendous challenges ahead in the coming years. I congratulate the defense minister on a proper process and the right choice."Deputy Defense Minister Eli Ben-Dahan joined in the chorus of praise and empasized: "Maj.-Gen. Kochavi is a talented officer with extensive experience and many successes. I am convinced that the army will continue to grow stronger and stand ready for every mission under his leadership."Former defense minister Amir Peretz added that: "Kochavi brings with him a commitment to the values ​​of the IDF as the army of the people and as a social melting pot that provides an opportunity for every Israeli." "Kochavi has the ability to make the most of a combination of human capital and technological progress."The selection process, which is based on recommendations by the military advocate general, consisted of six stages with Liberman consulting with Eisenkot and former senior officials such as prime ministers, defense ministers, chiefs of staff and others.Kochavi, a charismatic paratroop officer, was one of four front-runners for the position which also included Maj.-Gen. Yair Golan, Maj.-Gen. Nitzan Alon and Maj.-Gen. Eyal Zamir.His name will be brought before the Goldberg Committee on Sunday and, subject to its approval, the defense minister will present his appointment to the cabinet.Current IDF Chief of Staff Lt.-Gen. Gadi Eisenkot is set to step down in less than four months, after serving close to four years as the IDF’s top officer.