500 Israelis and Palestinians converge in Tel Aviv to talk peace 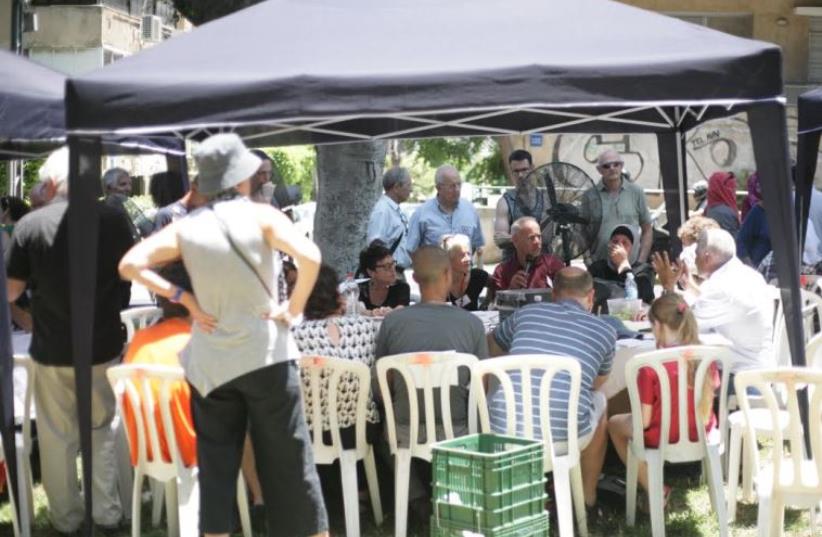 SOME OF THE 500 Israelis and Palestinians who met in Tel Aviv on Friday for a ‘public negotiating congress’ on the Palestinian-Israeli conflict. (
(photo credit: Courtesy)
Advertisement
“Ma’aleh Adumim is not going anywhere unless the Israeli government changes. This is the best answer I can give right now,” stated an Israeli participant to a frustrated group of Palestinians at a “public negotiating congress” Friday in Tel Aviv.Huddled under 17 canopies along Tel Aviv’s Rothschild Boulevard, some 250 Israelis and 250 Palestinians discussed and debated solutions to the Israeli-Palestinian conflict.The event, hosted by the NGO Minds of Peace, sought to involve the public in peacemaking by establishing “Israeli- Palestinian public negotiating congresses,” according to the NGO’s website.In these congresses, like the one on Rothschild Boulevard, Israelis and Palestinians from all walks of life meet face-to-face and attempt to reach informal peace agreements. Ultimately, the organization hopes to establish a major Israeli-Palestinian negotiation congress to further the peace process.Dr. Sapir Handelman, chairman of Minds of Peace, told The Jerusalem Post that bringing the Israeli and Palestinian public together adds a missing component to peace negotiations. “The leadership needs to know that the public is behind them in the peace process.Moreover, if the people are not involved, any peace process will crumble once the violent minority tries to impede a solution,” stated Handelman Handelman, an academic specializing in conflict resolution, modeled the Israeli-Palestinian congress after similar public congresses that pushed for peace in South Africa and Northern Ireland.On Rothschild some participants engaged in heated debates on topics ranging from settlement building and the Palestinian right of return. However, others were seen joking around and laughing.Tel Avivians walked by the negotiators with mostly interested glances, except for one bicyclist who angrily shouted at participants for standing in the bike path.The participants separated into groups of around ten Palestinians and ten Israelis and sought to reach solutions on various intractable issues of the conflict.Most groups reached agreements along the framework of the two-state solution, which would evolve into an Israeli-Palestinian confederation, according to Handelman.Ahmed Idkaidk, a participant from Jerusalem, stated that his group was unable to reach a conclusive agreement to the conflict. “The Israelis wanted Palestinian citizens of Israel to move to the West Bank, and we could not agree on this” he told the Post.Nevertheless, Idkaidk left the event with a positive impression. “I felt that there are two sides willing to make peace,” he remarked.David Schaps, a professor of classics at Bar-Ilan University and participant on the Israeli delegation, said that the most important aspect of the event was not the resulting agreements, but hearing the other side. “Many Jews only know what the Jews tell them and many Arabs only know what the Arabs tell them, so I came to hear the other side myself.”Eyal Margalit, a participant from Haifa, concurred that the friendships made the event significant toward furthering peace. “The keyword is trust, which comes from meeting and building relationships. One of my best friends is a Palestinian from Jerusalem who I met at the last negotiating congress” he remarked.Bringing hundreds of Palestinians from Nablus, Ramallah, Bethlehem and the surrounding villages to the heart of Tel Aviv proved to be a logistical challenge.According to Ofer Lidror, the strategic planner for Minds of Peace, organizing Palestinian attendees and navigating IDF bureaucracy were the largest obstacles. “Palestinians are concerned about reactions in their cities and villages.However, through daily interactions with Palestinian civil society, we organizers successfully gathered Palestinians who want contact and want peace,” Lidror stated.Lidror continued, “There’s no bad intentions from the IDF, just a lot of paperwork. A number of Palestinian participants left today after being forced to wait for hours at an IDF checkpoint.Still around 70 to 80 percent of our visa requests were accepted,” Lidror told the Post.For a group of Palestinian women from Nablus, this event was their first time in Tel Aviv. “I’m excited to visit the Old City in Jaffa and the see the ocean,” stated one woman, who declined to state her name.Other Palestinian participants filled Rothschild Boulevard with Arabic music, providing a festive atmosphere to the serious event.While all interviewed participants expressed support for peace, some were pessimistic about reaching a negotiated solution. “This is a great event with great ideas, but many of these ideas are dreams,” stated Daniel Aqleh from Bethlehem.The event left Handelman optimistic.“People thought I was hallucinating when I told them the idea. But we succeeded, and for the next event I’m hoping for 1,000 to attend.”