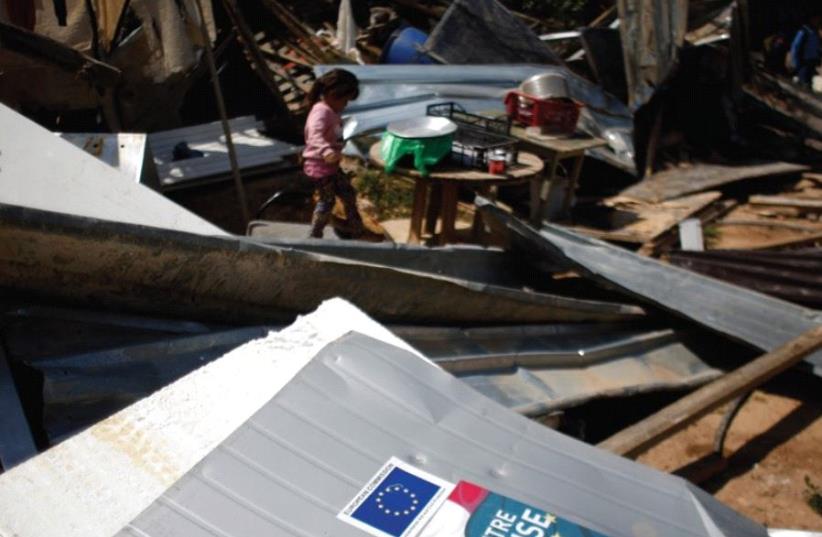 A GIRL WALKS through the remains of her illegally built family structure that was demolished by Israeli forces near Jericho on April 7, 2016
(photo credit: REUTERS)
Advertisement
Sixty percent of illegal Palestinian structures in Area C of the West Bank have not been destroyed since 2010, the head of the area’s enforcement division Marco Ben-Shabat told a Knesset committee on Tuesday.Until 2010, only 10% to 15% of such structures were taken down and over the last seven years only about 30 or 35% have been demolished, which means that about 60% are still standing, Ben-Shabat told the Foreign Affairs and Defense Committee during a hearing on the matter.Knesset Foreign Affairs and Defense Committee Chairman Avi Dichter of Likud mused that any mayor of a city with those kinds of tax collection numbers would have been replaced.Ben-Shabat blamed the enforcement failure in part on the 100% increase from 2015 to 2016 in petitions to the High Court of Justice against such demolitions.In actual numbers for 2015, he said, the Civil Administration identified 945 illegal Palestinian structures, of which 335 were destroyed. Last year there were 941 structures, of which 490 were taken down.Half of these structures were not populated, and most of the structures were modular or light construction, Ben-Shabat said, clarifying that the numbers did not include significant construction or multi-level buildings.He added that many of these illegal structures were for Beduin in Area C.Since 2016, a new procedure that allows taking down an illegal structure within 60 days of its construction without legal proceedings has helped the Civil Administration enforce the law, he said.More than 300 of the structures the Civil Administration has taken down were erected with the support of international organizations and, or with, the financial help of the European Union, Ben-Shabat said.In 2016, every EU funded structure that was put up in the area of the Ma’aleh Adumim settlement was taken down. In those cases, the Civil Administration dismantled those structures and stores them.“How many structures do you have there?” Dichter asked.“Five hundred,” Ben-Shabat responded.With regard to the issue of IDF firing zones in the West Bank, Ben-Shabat said no such areas had been created since the 1990s.The debate was held at the request of Joint List MK Aida Touma-Sliman, who said she raised the issue out of concern for the absence of building permits issued for Palestinian homes this year and the high number of demolitions of illegal structures that have taken place in Area C over the last few years.Touma-Sliman provided UN data that differed from Ben-Shabat’s and showed demolition of 875 illegal Palestinian structures in 2016 and 175 so far this year.She charged that the demotions were “political” and that it was part of a larger plan by Israel to annex Area C by creating facts on the ground “either through withholding permits or demolishing homes,” she said.When the EU helps the displaced Palestinians by providing temporary housing, Israel comes and destroys it, Touma- Sliman said, and “wants to expel as many Palestinians from their land as it can.”Bayit Yehudi MK Moti Yogev and Dichter took exception to her use of the word “occupation” to describe Israel’s hold on Area C.Touma-Sliman retorted: “If you want to stick your head in the sand and pretend there is no occupation, be my guest.”Yogev said that Touma-Sliman had presented the committee with falsehoods and that he wanted nothing more than to provide proper housing for the Beduin in Area C, but not on top of Route 1 in the region of Ma’aleh Adumim.He said that the Palestinian Authority had refused to provide housing for the Palestinians and Beduin in Areas A and B, thereby forcing them into Area C, trying to ensure that territory would become part of a future state.It’s a form of “terror through building,” Yogev said.