A year after Duma arson, settlers reflect on Jewish extremism

Efforts made to keep youth from joining attacks on Palestinians. 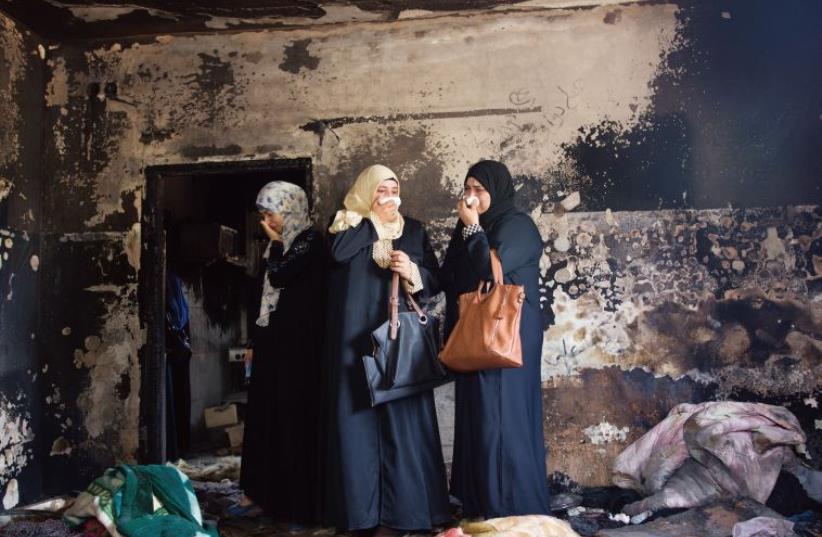 Photo of the Year: Menahem Kahana of the French AFP agency shows three Palestinian women standing in the Dawabsheh family home in the West Bank town of Duma, shortly after the arson that led to the deaths of an 18-month-old baby and his parents.
(photo credit: MENAHEM KAHANA)
Advertisement
On July 31, 2015, suspected Jewish terrorists came down from a settlement outpost in the hills and firebombed two homes in Duma, 25 km. southeast of Nablus. One house was empty, but the other fire killed three members of the Dawabsha family and brought renewed international scrutiny to Israel’s settlement enterprise.A year after the attack, life in the settlements near Duma has returned to relative normality.However, over the past year these communities have paid increased attention to the violent fringe of the settler movement.Tamar Asraf, a spokeswoman for the Binyamin Region Council, which covers 42 settlements stretching from northwest of Jerusalem to the center of the West Bank and adjacent to Duma, told The Jerusalem Post that before the Duma attack, the settlement community took measures to ensure only law-abiding citizens moved into the community, but post-Duma there is a heightened awareness.Regarding illegal outposts in the West Bank, Asraf remarked that there has been a cultural change. “Before, many of the outposts welcomed anyone to join their community, now not everyone is welcome, for example single men. The outposts have become more mature... they don’t want to be fighting the system, they want to be with the system,” she said.The phenomenon of radical religious-nationalist Israeli youth, or “hilltop youth,” establishing unauthorized outposts, condemned as illegal by the international community, has also become an issue of concern among the established settlement community.In many of these outposts, Jewish youth clash with not only their Palestinian neighbors, but also with Israeli security services.According to David Ha’ivri, a political activist from Kfar Tapuah, the Duma attack challenged the settlement community on how to deal with the phenomenon of radical youth. “The communities around here had been perplexed dealing with delinquency/ anarchism of mostly teenage boys who had left their families in more established places and camped out around here in tents and makeshift dwellings.”Asraf remarked that parents have been making an effort to be “more aware” of the hilltop youth phenomenon, in hopes of early intervention.According to Avi Herman a spokesman for Kochav Hashahar, a settlement of around 2,000 people nine kilometers from Duma, there are “very intensive” activities under way to ensure settlement youth do not join violent elements and attack Palestinians.“We want the youth to engage with issues of values and ethics. We have summer camps and host Shabbats for the youth,” he said.Herman was quick to say that the hilltop youth movement is only on the fringes of the community, which is “against violence and against ‘price tag’ attacks.”Nevertheless, a handful of youth have left Kochav Hashahar to join illegal outposts.There is a strong sense among the settlers that they are being blamed for the actions of extremists who do not represent the mainstream community. Jews living near Duma consistently point out the fact that those arrested and put under administrative detention in connection with the firebombing were not from their communities. “People felt that they are all being attacked and blamed for something that they haven’t done,” Asraf said.Herman agreed stating, “If [hilltop youth] are from Kochav Hashahar this is our responsibility, but if people from outside decide to illegally live in our area this is not our responsibility.”In the established settlements such as Kochav Hashahar and Shiloh, relations with the IDF, Israeli Police and Shin Bet remain highly cooperative.According to Herman, Kochav Hashahar has great relations with the police.“People from our community volunteer with the police, and we are very proud that the commissioner of police, [Insp.-Gen.] Roni Alsheikh, is from Kochav Hashahar.”Conversely, unauthorized outposts and members of the hilltop youth community have experienced an unprecedented crackdown.Immediately post-Duma, dozens of restraining and administrative detention orders were issued against leaders of the hilltop youth movement. Administrative detention - detaining a suspect based on undisclosed evidence without charge or trial for six month renewable periods – is commonly used to detain Palestinians, but prior to the Duma attack had not been used on a Jewish suspect since 2010.According to the Shin Bet, the number of incidents of Jewish terrorism remained unchanged from 2014 to 2015, but “the severity of the attacks increased.” Of the 16 instances of Jewish terrorism in 2015, 10 attacks occurred in the West Bank.Palestinian officials contend that there are many more incidences of Jewish violence, numbering in the hundreds in 2015. NGOs such as B’Tselem – The Israel Information Center for Human Rights in the Occupied Territories claim Israeli security services have been shielding Jewish extremists in the West Bank from prosecution.Still, representatives of the settlement communities have expressed support for the security service’s post-Duma stance on unauthorized outposts.According to Ha’ivri, the crackdown “actually has been a huge relief for our small towns who were having difficulties dealing with wayward youth whose parents were unknown.”Herman told Post “it was great that [the suspected Jewish terrorists] were arrested.”A year after the Duma firebombing, settlements close to Duma appear to have moved on from the most prominent instance of Jewish terrorism in 2015.According to Yisrael Medad, a longtime resident of Shiloh, located around six kilometers from Duma, “no one talks about Duma – we are just looking ahead.”