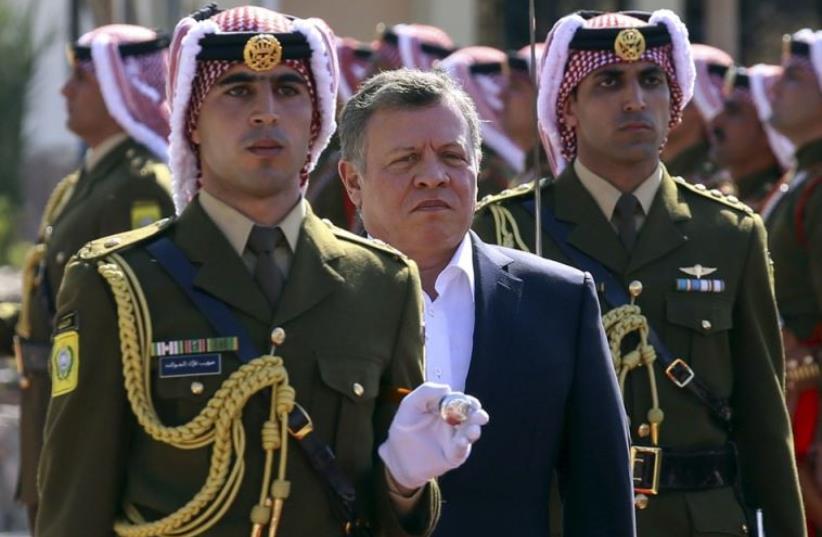 Jordan's King Abdullah II (2nd L) reviews an honor guard in Jordan's Red Sea port of Aqaba
(photo credit: REUTERS)
Advertisement
Jordan's monarch told international leaders in Munich on Friday that it was imperative to reach a resolution to the Israeli-Palestinian conflict if the world intended to defeat extremist fundamentalism.Speaking at the annual Munich Security Conference, King Abdullah called the Israel-Palestine stalemate "a festering wound" that is "exploited" by the likes of Islamic State.“One cannot talk about justice in the world without solving the Palestinian question and striving for a state for them," the Hashemite monarch said. "If this isn’t resolved, the entire region will slide into a religious conflict and ISIS is exploiting this.”“Left unresolved, the Palestinian-Israeli conflict can and will become a religious conflict of global dimension,” he said. “Reaching a two-state solution should remain a priority for us all.”Defense Minister Moshe Ya’alon met Abdullah on the sidelines of a security conference taking place in Munich on Friday, according to a communique from the minister’s office.The two men discussed bilateral relations between Israel and the Hashemite kingdom, as well as the latest developments in the Middle East.Ya’alon and Abdullah also spoke about ways to advance the Israeli-Palestinian negotiations.