Deal to allow some 25 Nepalese surrogate mothers to fly to Israel to give birth, despite a Nepal Supreme Court injunction. 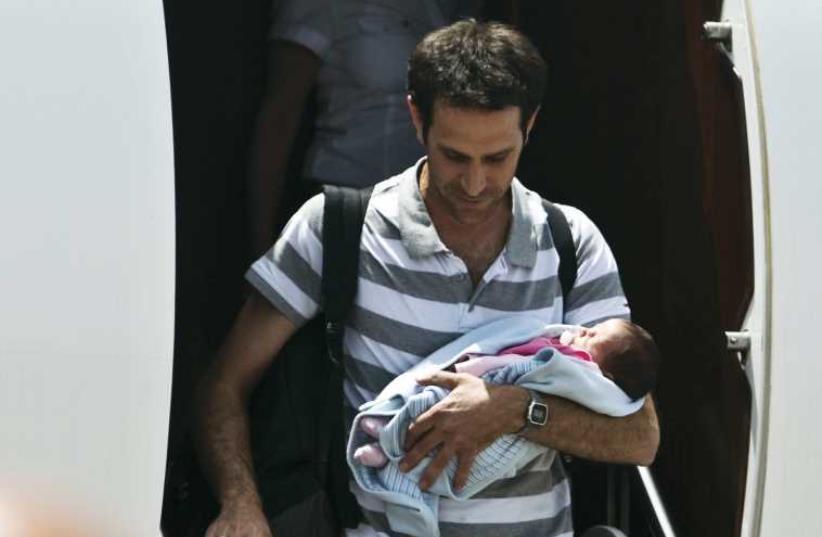 An Israeli man holds his baby, born to a surrogate mother, after being evacuated from Nepal and landing at Sde Dov Airport in Tel Aviv on April 27.
(photo credit: NIR ELIAS / REUTERS)
Advertisement
Israel reached an agreement with Nepal recently that will allow some 25 Nepalese surrogate mothers to fly to Israel to give birth, despite a Nepal Supreme Court injunction in August to stop Nepalese women from serving as surrogates.The agreement came about following intensive efforts by Foreign Minister director-general Dore Gold, as well as Israel’s ambassador in Nepal Yaron Meir, the ministry reported.According to Foreign Ministry spokesman Emmanuel Nachshon, the Nepalese government agreed that surrogate mothers who began their pregnancies before the Supreme Court injunction on August 25 will be allowed to continue with the surrogate process, and the babies will be delivered to their Israeli parents.Surrogate pregnancies, while legal in Israel for married couples, are banned for singles and same sex couples, who often go abroad for surrogacy.The phenomenon of Israelis looking to Nepal for surrogate mothers came into the headlines following the devastating earthquake in that county in April, when Israel evacuated 26 surrogate babies from that country.