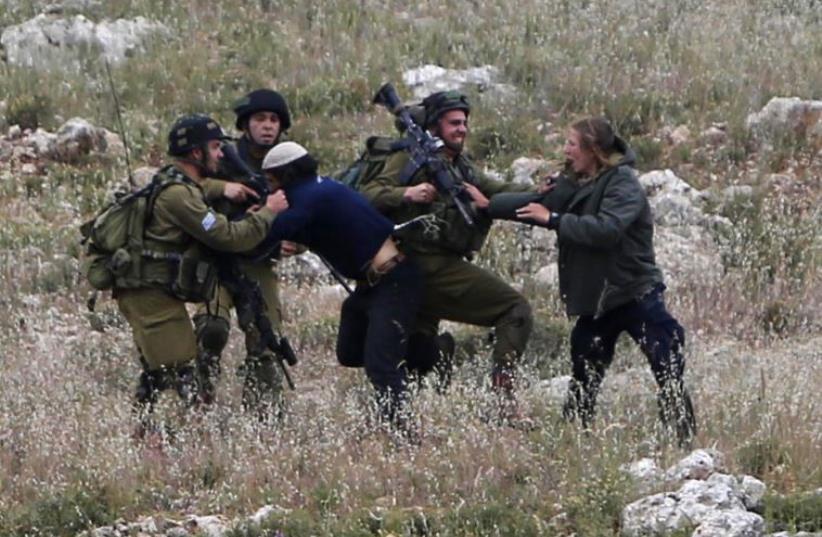 Israeli soldiers detain Jewish settlers during clashes with Palestinians near the West Bank village of Deir Jarir, near Ramallah
(photo credit: REUTERS)
Advertisement
Two right-wing activists were indicted in the Jerusalem Magistrate’s Court on Sunday for attacking police who were demolishing an illegal structure at the Gal Farm, near Kiryat Arba in the West Bank, on June 14.In the indictment filed by the Jerusalem District Attorney’s Office, Yeshua Ohana, 35, from Kiryat Arba was accused of throwing a rock that hit a bulldozer operator, causing substantial, though not life-threatening, head injuries.Yosef Frankel, 20, of Beit El, was accused of knocking down a police officer, causing an injury to the officer’s knee.Other activists in the crowd threw rocks at police or lay down in front of heavy equipment, but no others were named as having been arrested.Ohana and Frankel were charged with public disturbance, causing bodily harm and causing physical harm under aggravated circumstances.Honeinu, an organization representing rightwing activists, disputed the indictment, arguing that the circumstances were more convoluted than presented and that Frankel had been attacked by police, with bruises to prove it.Also on Sunday, Honeinu lawyer Adi Kedar announced that prosecutors had closed the file on Netanel Furkowitz, although the Shin Bet (Israel Security Agency) had arrested him for 12 days on suspicion of involvement in the fatal July 2015 arson in the West Bank village of Duma. The fire killed 18-month-old Ali Dawabshe and fatally injured his parents.The prosecution said there was “no basis for suspicion” that Furkowitz was a member of a Jewish terror cell.Regarding allegations that he had obstructed the investigation, the Justice Ministry noted that the charges were not sufficiently significant to warrant an indictment.A move like this usually indicates that while a suspect is believed to be guilty, the actions were not grave enough to justify the resources needed to go to trial.Honeinu and the ministry disputed the extent of Furkowitz’s involvement in the sale of a car to another indicted activist for use in so-called price-tag attacks.“Furkowitz’s case,” Kedar said, “should wake the public from its slumber, especially the residents of Judea and Samaria” who could suddenly find themselves unjustifiably detained by the Shin Bet.He also complained that the courts were mostly cooperating with the prosecution and the Shin Bet in extending “unjustified” arrests.