The two countries issued a joint statement announcing the re-establishment of ties. 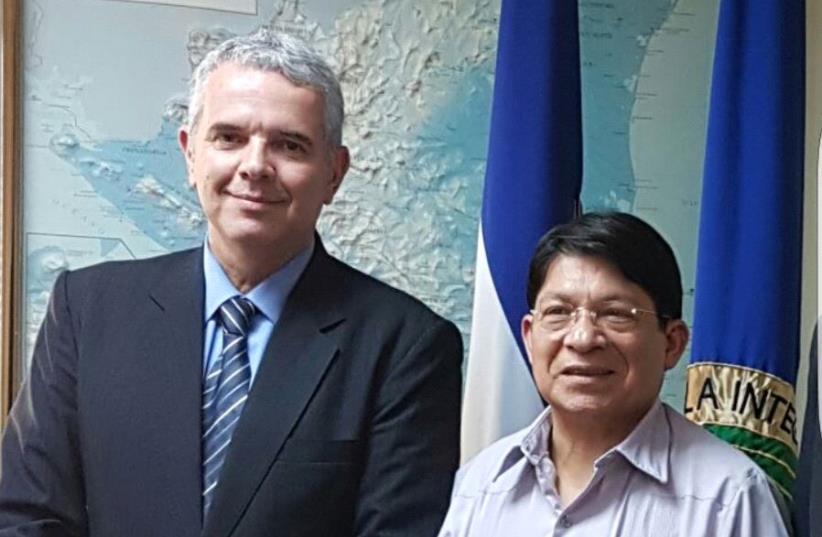 Modi Efraim, the foreign ministry’s deputy director-general for Latin America and Nicaraguan foreign minister, Denis Ronaldo Moncada Colindres.
(photo credit: FOREIGN MINISTRY OF NICARAGUA)
Advertisement
Israel and Nicaragua announced early Wednesday morning the reestablishment of diplomatic ties, some seven years after Managua broke off relations because of the Mavi Marmara incident.The two countries issued a joint statement announcing the reestablishment of ties after Prime Minister Benjamin Netanyahu, at a speech Tuesday night, said that Israel would soon be reestablishing diplomatic ties with a country. He did not name the country at the time.The statement read that the two countries had friendly relations and cooperation across a wide range of areas such as agriculture, health and education until the ties were suspended in 2010 following Israel’s raid on the Turkish ship that was trying to break the blockade of Gaza. Nine people were killed in the incident.
The Mavi Marmara Incident
“Both governments view very favorably the reestablishment of ties with the aim of advancing joint cooperation for the advancement of both nations and to contribute to the struggle to achieve peace in the world,” the statement read.Since Nicaragua severed ties, it has joined Venezuela, Bolivia, Cuba – heavily influenced by Iran – as among Israel’s most strident critics in Latin America.Bolivia and Venezuela severed diplomatic ties with Israel in 2009, following Operation Cast Lead, and Cuba broke off diplomatic ties with Israel in 1973, following the Yom Kippur War.The Foreign Ministry said that the reestablishment of ties with Nicaragua follows contacts that have taken place over the last year, including a visit by Modi Efraim, the ministry’s deputy director-general for Latin America, in Managua last week where he met that country’s foreign minister, Denis Ronaldo Moncada Colindres.Efraim termed the reestablishment of ties an “important breakthrough” and attributed it in part to Nicaragua’s appreciation of Israel’s potential in the fields of technology, agriculture and water management.“I am glad that with a country as critical of Israel as Nicaragua, we will now be able to have an open and direct dialogue,” he said, adding that this will undoubtedly lead to “more understanding [around the world] of our positions.”Israel’s ambassador in Guatemala is likely to serve as the country’s envoy to Nicaragua, and no decision yet been announced as to who will represent Nicaragua here. The country has never had an embassy in Israel.Efraim said that Nicaragua has been blocking the granting of observer status to Israel in a multinational Central American organization called SICA, and – as a goodwill gesture – dropped its opposition two weeks ago.Israel believes its involvement in various regional organizations such as this one will help its standing in various international bodies, and it also enables Israel to take part in a number of large scale economic projects. In addition to Nicaragua, SICA is made up of Belize, Costa Rica, the Dominican Republic, El Salvador, Guatemala, Honduras and Panama.