"I'm going to shower across the street, make sure my change of clothes are around the corner." 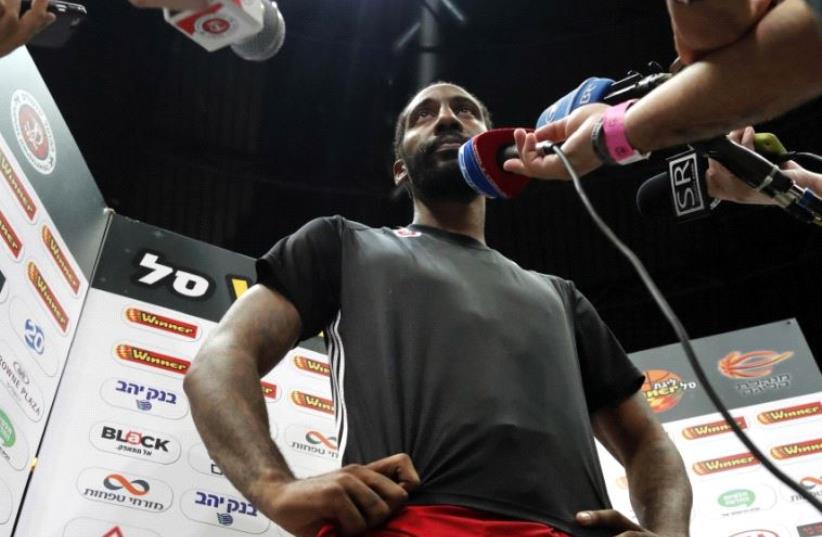 Amar’e Stoudemire speaks to journalists after a training session, October 7
(photo credit: THOMAS COEX / AFP)
Advertisement
Hapoel Jerusalem's ex-NBA star Amar'e Stoudemire has found himself mixed up in controversy once more, making a homophobic comment in an informal survey examining basketball players' attitudes towards having a gay teammate.The 34-year-old forward is making headlines across the world for the wrong reasons after telling Israeli website Walla that he would go out of his way to avoid a homosexual teammate. "I'm going to shower across the street, make sure my change of clothes are around the corner," he said, with a smile. "And I'm going to take a different route to the gym." Asked if he was joking, Stoudemire said, "I mean, there’s always a truth within a joke." Hapoel Jerusalem officials insisted that he was only trying to be funny, while the league said in a statement that it "regretted" Stoudemire's comment but is certain that most, if not all, of the other players in the league would have no problem playing alongside a gay teammate.All the other players appearing in the survey said they would not be bothered by having a homosexual member on the team.Five years ago, Stoudemire received a $50,000 fine from the NBA for a homophobic comment made towards a fan on Twitter. Stoudemire went on to apologize to the fan after using the slur in response to a crude tweet in which the fan admonished the All-Star to "make up for this past season." Stoudemire's latest controversy came on the back of his receiving the Martin Luther King Jr. Award, presented for the past 19 years and sponsored by the State of Israel, the Jewish National Fund and the Jewish Community Relations Council of New York.At the Jerusalem award ceremony on Sunday, Russell Robinson, CEO of the Jewish National Fund-USA, said, "Stoudemire has again set an example that sportsmanship supersedes nationality, ethnicity, or religious affiliation." "I am truly honored to be receiving this amazing award," Stoudemire said in a statement. "It is very gratifying to know that all the work that the Alexis and Amar’e foundation has done over the years is not overlooked. I am blessed to be able to give back to the community, that's what it's all about."