Ambassadors from Thailand to Mexico present credentials to Rivlin

President Reuven Rivlin on Thursday accepted the credentials of five ambassadors to Israel. 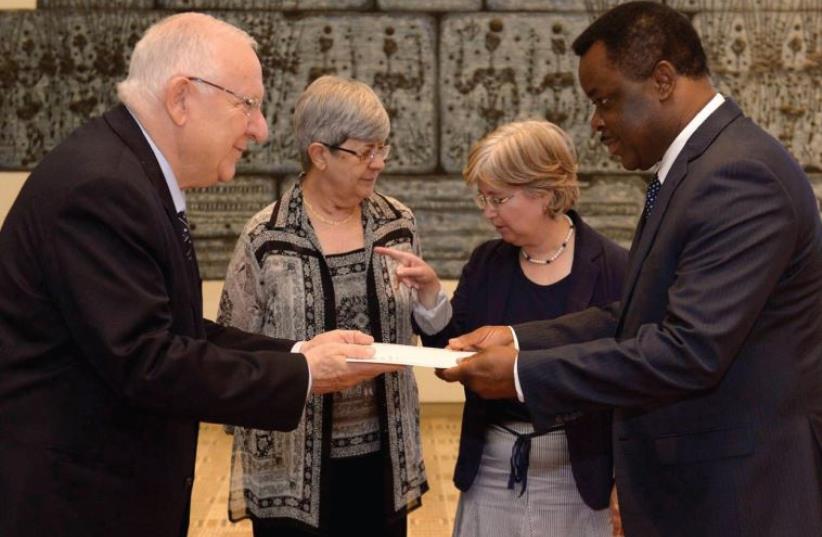 rivlin and Ambassador Eustaquio Nseng Esono of Equatorial Guinea
(photo credit: Mark Neiman/GPO)
Advertisement
President Reuven Rivlin on Thursday accepted the credentials of five ambassadors to Israel.Throughout the morning the envoys, one after another, came to the President’s Residence, presented their letters of credence and the letters of recall of their predecessors, conversed briefly with Rivlin, who toasted their arrival and success, and then went on to the King David Hotel for the traditional vin d’honneur reception, which gave them the opportunity to meet many of their colleagues.The new ambassadors are: Angsana Sihapitak of Thailand, Benito Andion Sancho of Mexico, Adis Arlene Urieta Vega of Panama, Martin Chungu Mwanambale of Zambia and Eustaquio Nseng Esono of Equatorial Guinea.For three of the ambassadors it was a day of firsts. Sihapitak is her country’s first female ambassador to Israel. Mwanambale is Zambia’s first resident ambassador to Israel, and Esono is Equatorial Guinea’s first-ever ambassador to Israel.For Sancho, a career diplomat who has served in many parts of the world, this is his last posting. He said he is grateful to Mexican President Enrique Pena Nieto for bestowing on him what he called “the jewel in the crown of my career in the foreign service” by assigning him to Israel. “The best is the last,” he said.Vega, who was formerly an investigative journalist reporting from the Middle East, is serving her second term as Panama’s ambassador to Israel. She was appointed the first time in 2008 when she was already serving in Panama’s Embassy here, and completed her term in 2009. Her two daughters attend school at Gymnasia Rehavia, where Rivlin was himself a student and where Israel’s second president Yitzhak Ben-Zvi was a teacher.Rivlin conveyed through Sihapitak best wishes for the recovery from illness of Thailand’s King Bhumibol Aduladej. He also mentioned how appreciative Israel is of the large number of Thai workers who are here primarily to work in agriculture. Sihapitak replied that there are more than 35,000 of her countrymen in Israel and that some 150,000 Israeli tourists visit Thailand each year.When Sancho told Rivlin that the president of Mexico will be visiting the region, Rivlin replied that the only thing that Shimon Peres has asked of him is that when Nieto visits Israel, Peres be included in the reception for him. Peres visited Mexico in November 2013 as Nieto’s guest.Rivlin asked both Sancho and Vega for their assistance in enabling Israel to achieve observer status in the Pacific Alliance and in SICA, the Association of Central American States.He told Sancho that Prime Minister Benjamin Netanyahu had informed him of his upcoming visit to Latin America, starting with Mexico.He also thanked Vega for the role Panama played in the UN resolution on the partition of Palestine in November 1947.Vega was pleased to tell him that two of her country’s presidents had been Jews, and that the surname of her family’s physician is Rivlin.Before Vega left the building, Rivlin turned to Foreign Ministry representatives, saying that there is now one ambassador who lives in Jerusalem, and that it is up to them to persuade other ambassadors to do the same.Rivlin congratulated Mwanambale on the opening of a Zambian Embassy in Israel, adding that he is pleased that a number of Zambian ministers are scheduled to visit in the near future. He said that he would welcome a visit by Zambia’s President Edgar Lungu.Esono is stationed in Cairo. Rivlin said that he hopes the day will come when Equatorial Guinea will also have an embassy in Israel.Esono spoke of Israel’s investments in Equatorial Guinea, particularly in the sphere of health. There are two Israeli-built state-of-the-art hospitals which are partially staffed by Israelis.