Foreign Ministry chief attends conference in Jordan together with representatives from 57 states, including Algeria, Egypt, Jordan, Morocco and Tunisia. 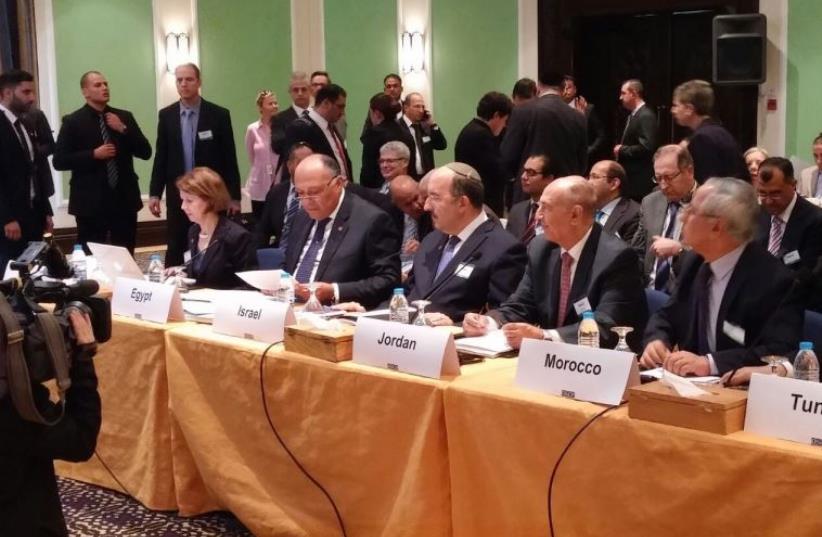 Foreign Ministry Director General Dore Gold Organization for Security and Cooperation in Europe (OSCE) conference in Jordan
(photo credit: FOREIGN MINISTRY)
Advertisement
Times of crisis “cannot be an excuse for not having dialogue,” Foreign Ministry Director General Dore Gold said on Tuesday at an Organization for Security and Cooperation in Europe (OSCE) conference in Jordan.Representatives from 57 OSCE states, plus six Mediterranean partners – Israel, Algeria, Egypt, Jordan, Morocco and Tunisia – took part in the conference at a hotel on the Dead Sea.His comments about the need for dialogue come against the backdrop of strained Israeli-Jordanian relations as a result of the Temple Mount-related violence, with persistent reports that King Abdullah II has rebuffed efforts by Prime Minister Benjamin Netanyahu to speak and meet with him about the situation. Last moth Jordan even threatened to recall its ambassador to Israel as a sign of its displeasure.Gold, according to the Foreign Ministry reiterated at the conference that Israel was “completely” committed to upholding the status quo at the Temple Mount, as well as to the peace treaty with Jordan.Fighting incitement is an important component in the war against “cruel terrorism that is hitting every state represented at this conference,” Gold added.The theme of the two-day conference is “Common security in the Mediterranean region – challenges and opportunities," and among the issues on the agenda are “addressing violent extremism and radicalization that leads to terrorism;" "the role of interfaith/inter-cultural dialogue," and “irregular migration, refugee protection, migrant smuggling and human trafficking the Mediterranean."The OSCE has, since 1995, been holding annual conferences with its Mediterranean Partners for Cooperation.