Analysis: Automatic voting against Israel at UNESCO? Not anymore 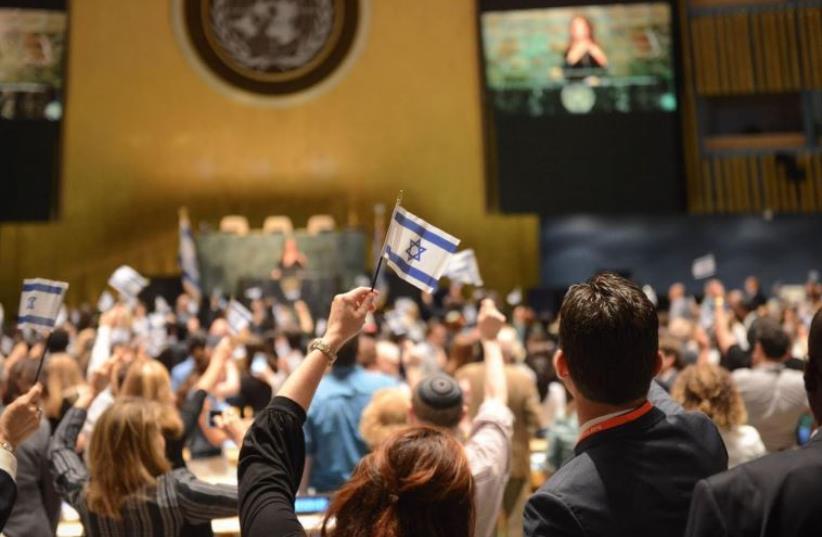 Anti-BDS summit at UN Headquarters, May 2016
(photo credit: SHAHAR AZRAN)
Advertisement
Israel was caught flatfooted in April when UNESCO’s 58-member executive board adopted a resolution with language that essentially expunged any Jewish connection to the Temple Mount.Israel’s embassies and consulates abroad were not mobilized to defeat the proposal, angry letters were not sent to the members of the executive committee, and friendly countries were not contacted to press other nations to vote down a resolution that simply falsified history.Not this time though. April’s vote was a wake-up call, and as the 21 members of UNESCO’s World Heritage committee convening in Istanbul on Tuesday consider yet another resolution erasing any Jewish connection to Jerusalem, the Foreign Ministry this time is waging a full-court press to block the move.This includes a letter by Foreign Ministry director-general Dore Gold to the 16 countries on the committee with whom Israel has relations; diplomatic lobbying efforts in their capitals; and mobilizing friendly countries outside the body – such as France, Germany and Britain – to enlist them to pressure the body not to pass such a resolution.France shocked Jerusalem in April when it voted for the UNESCO Jerusalem resolution, but it has since apologized. This regret is now being translated into efforts not to let the same mistake happen again.Prime Minister Benjamin Netanyahu said time and time again during his trip to Africa last week that one of his strategic goals is to break the automatic anti-Israel majority at international forums that in the past could be counted on to vote reflexively against Israel.The Palestinians may pull the resolution and not bring it to a vote because of their uncertainty whether it would pass. If, however, it does go to a vote, it will be good indication of whether, as Netanyahu maintains, things are starting to change. And a look at the 21 countries on the committee shows that if there is a vote, it could be much closer than usual.The following countries are on the executive: Angola, Azerbaijan, Burkina Faso, Croatia, Cuba, Finland, Indonesia, Jamaica, Kazakhstan, Kuwait, Lebanon, Peru, Philippines, Poland, Portugal, Republic of Korea, Tunisia, Turkey, United Republic of Tanzania, Vietnam and Zimbabwe.Of those 21, six can be written off from the start: Cuba, Indonesia, Kuwait, Lebanon, Tunisia and Zimbabwe.An equal number – six states – can be counted on to either vote for Israel and against the resolution, or at least to abstain: Croatia, Finland, Poland, Portugal, the Republic of Korea, and Tanzania.Five other counties will, based on previous voting patterns, likely vote against Israel: the Philippines, Jamaica, Turkey, Kazakhstan and Azerbaijan.This will be the first vote in an international forum since Israel and Turkey signed a rapprochement agreement, and it will be interesting to see if the accord changes Ankara’s vote against Israel. If it was another issue on the agenda, rather than Jerusalem, it might have been possible to imagine that Turkey might abstain, but since it is Jerusalem, it is difficult to imagine that Muslim Turkey will vote against the resolution because it does not recognize a Jewish connection to the city.The same could be said of Azerbaijan and Kazakhstan, two other Muslim countries. Unlike Turkey, however these two countries have strong ties with Israel, and Netanyahu announced last week his intention to visit Kazakhstan by the end of the year, as well as the possibility of a visit to Azerbaijan.Both those countries traditionally vote against Israel, falling in line with the world’s Islamic states, and it is unlikely they will break ranks now over Jerusalem.That leaves five counties whose votes are very much still in play.Two of those countries – Angola and Burkina Faso – are in Africa, where Israel is trying its hardest to alter voting patterns. It is not inconceivable that both these countries abstain.Both, for instance, abstained in September when Israel defeated at the International Atomic Energy Agency an Egyptian resolution that would have mandated international inspections of Israel’s nuclear facilities.Israel campaigned very hard for those votes, and it paid off. If Angola and Burkina Faso get a sense of how important this is to Israel, they may – as they’ve done in the past – abstain.Burkina Faso has a history of abstaining, having done so last July at a UN vote on recognizing a Palestinian NGO connected with Hamas. Angola also abstained, on another UNESCO vote last October that condemned Israel for aggression on the Temple Mount.In Asia, Israel has expressed deep disappointment in recent months at the voting pattern of Vietnam – a country with whom Israel has strong economic ties – which voted against Israel at the IAEA last year, and against Israel in the UNESCO vote on Jerusalem in April. Israel has worked hard ever since trying to convince Vietnam that friendship is not only business, but also diplomatic support, and a Vietnamese abstention here would be a significant coup.Which leaves Peru, a country that generally votes against Israel, but has been known on occasion to abstain, as it did at the IAEA vote last year.According to this tally, the motion will likely pass with at least 11 yea votes. And when it does Israel will respond – as reflexively as, say, Indonesia voting against it – that the cards at the UN are stacked against it. Which they are. But things are slowly changing, and Israel is chipping away – albeit slowly – at that automatic anti-Israel majority.