Analysis: Haredi parties wipe out Lapid’s IDF draft law – but for how long?

The amendment to the law for haredi (ultra-Orthodox) conscription that was passed yesterday postpones the implementation of obligatory enlistment for full-time yeshiva students until 2020. 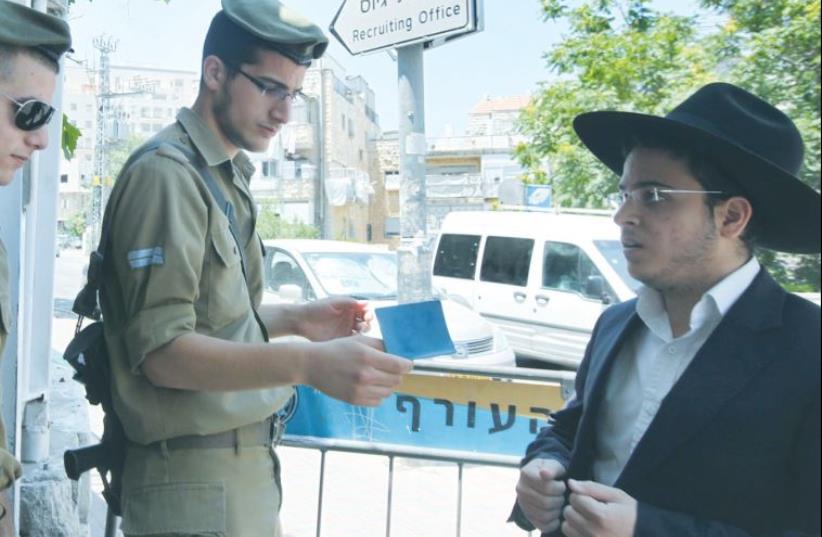 A HAREDI MAN shows his call-up notice to soldiers to allow him entry to the Jerusalem recruitment office
(photo credit: MARC ISRAEL SELLEM)
Advertisement
There are not that many certainties in life, but one of them was surely that the ultra-Orthodox political parties would change the previous government’s law for ultra-Orthodox enlistment as soon as they had the chance.That chance came perhaps sooner than expected, but the chorus of experts who predicted that the law – forced through the Knesset by Yesh Atid and its chairman Yair Lapid in 2014 – would be repealed before it was fully implemented have certainly been proved correct.The amendment to the law for haredi (ultra-Orthodox) conscription that was passed yesterday postpones the implementation of obligatory enlistment for full-time yeshiva students until 2020, though it was originally supposed to come into effect in 2017. It also gives the Defense Minister the authority to exempt yeshiva students after that date if he so wishes, “while bearing in mind” goals established by the government under the 2014 law.Two crucial and intertwined questions are raised by this change to the existing law: How will it impact the rate of haredi enlistment to national service? And, how will the High Court of Justice view the change when the inevitable slew of law suits against the amendment are filed against it? In truth, the amendment is unlikely to have a major impact on haredi enlistment levels in the short term.Enlistment rates were on the rise before the Tal Law – the previous legal arrangement for haredi yeshiva students – was struck down by the High Court. Those rates continued to rise during the nearly two-year period after that decision and during the passage of Yesh Atid’s law in March 2014.Indeed, the rate of enlistment continued its rise even after the law was passed, although at a reduced rate in the first few months afterward due to the animosity of the haredi leadership and the public to the legislation.It is likely, therefore, that over the next few years, haredi enlistment to the IDF will continue to rise given the trend of increasing enlistment of the last five years.The critical question is where the ceiling for the rate of haredi enlistment will be in the absence of any positive or negative incentives to enlist, as is now the case.In 2014, 2,280 haredi men enlisted to the IDF, and another 339 enlisted to the civilian service program, an alternative to military service for haredi men. The size of each annual cohort of haredi men turning 18 is approximately 8,000 people, meaning that the rate of haredi enlistment for 2014 was roughly 33 percent of the potential draft.Professor Yedidia Stern, the head of the Israel Democracy Institute’s religion and state project and dean of the Law Faculty at Bar-Ilan University, estimates that the upper limit for enlistment without incentives or sanctions would be approximately 50% of the potential draft.This would be an improvement on today’s 33%, but would still likely represent a significant inequality in the application of mandatory national service for Israeli citizens.This leads to the second crucial question raised by Monday’s amendment – that of how the High Court will view the new legal situation.In this regard, it is worth looking back at the Tal Law, which provided a legal framework for haredi men to indefinitely postpone their military service until they reached the age of exemption, and at the reasons why the High Court declared it incommensurate with Israel’s basic laws.The court said in 2012, that while there had been an increase in the number of haredi men enlisting to military or civilian service, the rate of increase was insufficient given the legal inequalities the Tal Law generated.“Legislation that perpetuates the gaps and flaws of the lack of equality, to the extent which they currently exist, cannot be upheld,” wrote then-Supreme Court president Dorit Beinisch in the 2012 ruling.In 2011, the last full year for which the High Court could see haredi enlistment statistics for their 2012 ruling, 1,282 ultra-Orthodox men enlisted to the IDF and 1,089 enlisted to the civilian service, totaling 2,371 haredi military or civilian service recruits.This was just under 30% of the potential draft.Bearing in mind the 30% rate of haredi enlistment in 2012 when the Tal Law was declared unconstitutional and the 33% rate of enlistment today, it seems highly unlikely that the High Court will deem the new amendment – which to all intents and purposes removes the legal obligation for haredi men to perform national service – commensurate with the requirements of equality before the law.Additionally, the terms of the amendment state that the Defense Minister is responsible for setting enlistment targets and, if those enlistment targets are not met after 2020, the Defense Minister will be able to exempt a full-time yeshiva student over the age of 21 “while paying attention to the enlistment targets.”But the amendment provides no enlistment targets and no criteria by which the Defense Minister should make his decision, which would therefore make his deliberations subject to political considerations, such as if the haredi factions threaten to leave a government if mass exemptions are not provided.This lack of criteria is another serious legal deficiency in the amendment, which will likely be seized upon by draft equality campaigners in their petitions to the High Court and be put under the microscope by the justices on the court.Although the High Court may not chose to invalidate every aspect of the new amendment, it is likely to insist that changes are made to ensure greater equality in the drafting of Israeli citizens into national service.And every time a new round of Knesset legislation begins, the issue of haredi enlistment gets dragged back into the headlines and the public debate, giving radical elements in haredi society fiercely against conscription the opportunity to incite against enlistment once again.Although United Torah Judaism and the haredi leadership appear to have bested Lapid for the moment, it seems highly unlikely that they will have the last word.The question then is how long it will take for the High Court of Justice to have its say.