Analysis: How many years in prison will Olmert really serve?

While most commentators do not think the former prime minister has much of a chance of tossing out his Holyland conviction, there is a strong chance that the six year sentence will be reduced. 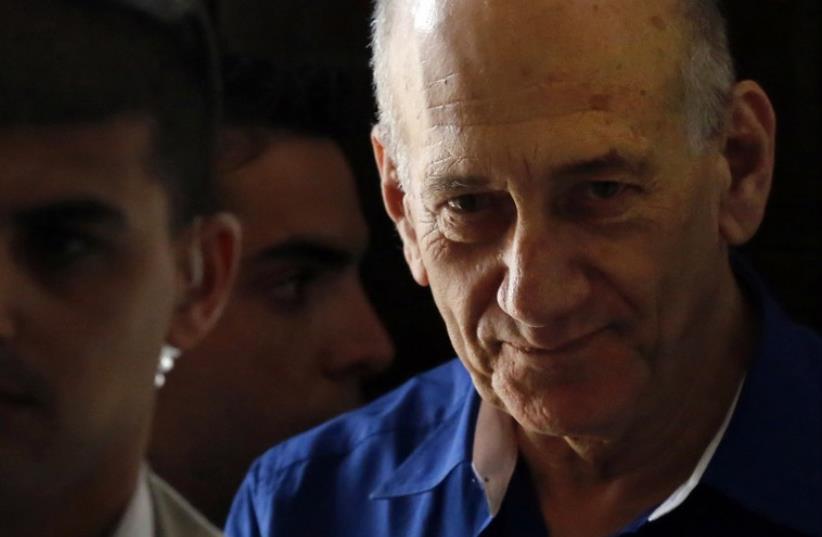 Former Israeli Prime Minister Ehud Olmert
(photo credit: REUTERS)
Advertisement
Jail is looking more and more like a foregone conclusion for former prime minister Ehud Olmert.In May 2014, he was sentenced to six years of prison on his bribery conviction in the Holyland trial relating to taking bribes for smoothing over violations of zoning and real estate laws.If he cannot knock down both convictions on appeal, which seems a long-shot at this point, he now faces an additional eight months on his conviction for fraud in the Talansky retrial for illegally accepting, using and concealing over $150,000 from American businessman Morris Talansky.But will Olmert really sit behind bars for a full six years and eight months?Start with the six years.While most commentators do not think the former prime minister has much of a chance of tossing out his Holyland bribery conviction, there is a strong chance that the six year sentence could be cut in half.Former minister Shlomo Benizri was sentenced to only four years in prison for bribery and, back in 1999, Economy Minister Aryeh Deri was sentenced to only three years for bribery.The point is that Olmert’s lawyers were right when they claimed that his six year sentence was on the extreme high end of what he could have received.Tel Aviv District Court Judge David Rozen decided to throw the book at Olmert and accepted the state’s argument hook-line-and-sinker that he should make an example of Olmert.Rozen called Olmert “the minister of ministers.”Combine that with his view that the Holyland Affair was possibly the worst bribery scam involving public officials in the country’s history, and we can understand the math of his six year sentence.But the Supreme Court may very well bring a different kind of math to the table.It may decide that someone with Olmert’s many contributions to the state should not get an oversized sentence or one worse than an average sentence.The justices may say that Olmert’s suffering loss of office and his years of wasting away in court should also preclude Olmert getting a harsher than average sentence.The upshot is they could easily cut the six years to around three years.Returning to Deri and Benizri, neither served their full prison terms, getting reductions from the Israel Prisons Service for good behavior.Deri only served two of three years and Benizri served two-plus out of four.Suddenly six years eight months could drop to three years and eight months, and with good behavior, under three years.Of course there is still the matter of a possible new indictment against Olmert for obstruction of justice and witness tampering related to Olmert’s conduct in the Talansky and Holyland trials.But that case may never get filed and as things stand, while Olmert is very likely going to serve time, it could be far less than the six years and eight months currently being discussed.