Analysis: If you will it

"The minute you exploit land under military occupation by using it for residential purposes, you are sawing off the branch on which the entire settlement enterprise is perched." 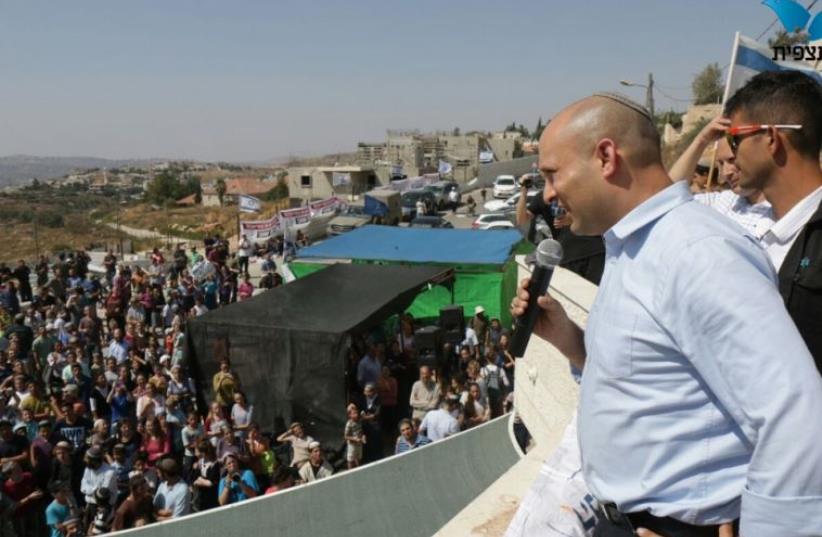 Education Minister Naftali Bennett addresses crowd at Beit El settlement
(photo credit: TAZPIT)
Advertisement
Bayit Yehudi head Naftali Bennett spent Wednesday morning on the phone with Prime Minister Benjamin Netanyahu. The bulldozers drove up to the two disputed buildings in Bet El and Bennett concentrated all his efforts on the grand prize: the 300 apartments Netanyahu promised to build after destroying the Ulpana neighborhood, but never delivered. Bennett asked Netanyahu to issue a public statement as soon as possible that the plan was going ahead. To quieten things down. The PM’s office acquiesced and the announcement was issued at 12:10.Now, let’s hop over to the “Jewish Home’s” sister party, the one that includes Minister Uri Ariel. Before the elections they had almost split up. If you ask me, Bennett would have been happy had that happened, but Ariel and his far-right friends chickened out at the last minute.The raised voting threshold had them worried. Ariel is now a splinter in Bennett’s behind. Ariel was aware of the imminent approval of 300 new apartments in Bet El. He knew (from Bennett) that Netanyahu was about to issue a statement.So what did Ariel do? At 11:39 am he sent a communiqué to the political correspondents according to which he “demanded Netanyahu’s immediate approval for 300 new apartments in Bet El […] I was very firm,” he said. I wonder if Ariel is ever not “firm.” The punch line came at the end of the communiqué: “I informed the PM that I expect a positive response within the hour.”I wonder what Ariel would have done if there had been no positive response. He left it to Netanyahu’s imagination.Under such circumstances, with threats and ultimatums in the air, Netanyahu’s imagination is very fertile. Ariel roared; who wouldn’t be afraid? Incidentally, for a change, Netanyahu kept to schedule: the announcement was released 46 minutes after Ariel’s countdown began.Netanyahu has never been so nimble, which allowed Ariel to issue another announcement at 12:31 (52 after the ultimatum), thus: “Minister Ariel has just been informed by the PM that approval is granted for 300 apartments in Bet El.”What a relief. Netanyahu is safe. The settlement enterprise has won. Zionism has won. All because of one courageous minster who had the presence of mind to make a “firmly demand” and even set a timetable. No doubt about it, Uri Ariel is the new Theodor Herzl. If you will it, it is no dream. We should thank the good lord that Ariel did not exploit the remaining 14 minutes of his ultimatum to demand two or three more illegal settlements. Seems a waste, no? All in all, Bennett should be pitied for having these two, Ariel and Moti Yogev growing wild in his patch. The difference between Bennett and Ariel and Yogev lies in the rampant crudeness of the latter, their inability to recognize limits and good taste. Bennett reprimanded Yogev for his call to bulldoze the Supreme Court. Ariel was not reprimanded. He knows Ariel: he is happy to be the man who humiliated the PM in public for daring to carry out an absolutely valid Supreme Court ruling.Ariel has no qualms about creating an imaginary reality in which he presents an ultimatum to a prime minister in Israel – who supposedly capitulated - in order to take sole credit for the results. All because of two uninhabited concrete buildings. The settlers continue to hold on to a retrospective arrangement for the lands on which the thuggish contractor, Meir Dreinoff and his half-witted son, Yonatan, in order to justify leaving the buildings intact. They disregard the fact that the land is meant solely for military purposes. The minute you exploit land under military occupation by using it for residential purposes, you are sawing off the branch on which the entire settlement enterprise is perched. You are explaining to the world that it’s all one big Isra-bluff. You are destroying the remains of any legitimacy you have left.In Europe, plans are currently underway to stop working with Israeli banks that are active in the territories (including the Golan Heights and Jerusalem!). If this materializes, we can start the countdown to a total global boycott. So this is just the time to spit in the world’s face, to ignore the Supreme Court of Justice, to humiliate the Prime Minister and his Defense Minister and to continue thumbing your nose at everything.The epitome of this phenomenon is that delightful, romantic couple Avia and Rafael Morris, of the “Muhammad is a pig” incident on the Temple Mount last week. In an interview they granted me and Arie Eldad on Non-stop Radio, they declared shamelessly that the mosques on the Temple Mount should be destroyed. The third temple should be erected instead, now, immediately. And if Arabs want to visit the temple mount, by all means. On condition that they pray to the god of Israel. Fortunately, Ms. Morris, all of 20, didn’t add that she was expecting a response “within an hour.” She may well have received it.