Analysis: In Israel, careers have ended over far less than Trump's tape

When it comes to vile comments and violent actions against women, the buck – and the shekel – stops here.

Trump: I pledge to be a better man tomorrow (Reuters)
Advertisement
American Republican presidential candidate Donald Trump’s lewd tape in which he made vulgar statements about women and what he has done to them raised questions in Israel on Saturday about whether such a tape would end the career of a politician here.Zionist Union faction head Merav Michaeli, a noted feminist, heard the Trump tape Saturday on the day she attended a 70th birthday celebration for American feminist icon Catharine MacKinnon in Boston. She wrote on Twitter that she hoped “‘Pussygate’ would be the Watergate of Trump.”Speaking on a train from Boston to New York, Michaeli said that due to the work done in Israel by her and other MKs there is much more awareness now that women are human beings and not sex objects. She said she was encouraged by incidents like that of former Bayit Yehudi faction chairman Yinon Magal, who resigned in November due to sexual harassment allegations.“I sure hope a tape like this would end a career in Israel,” Michaeli said, “We aren’t out to get anyone but we are working to change the reality in Israel in the direction of equality so it would end a career.”Michaeli’s statement was arguably conservative. This is a country in which a sitting president was forced to resign because of allegations that led to a rape conviction for which he is still sitting in prison. 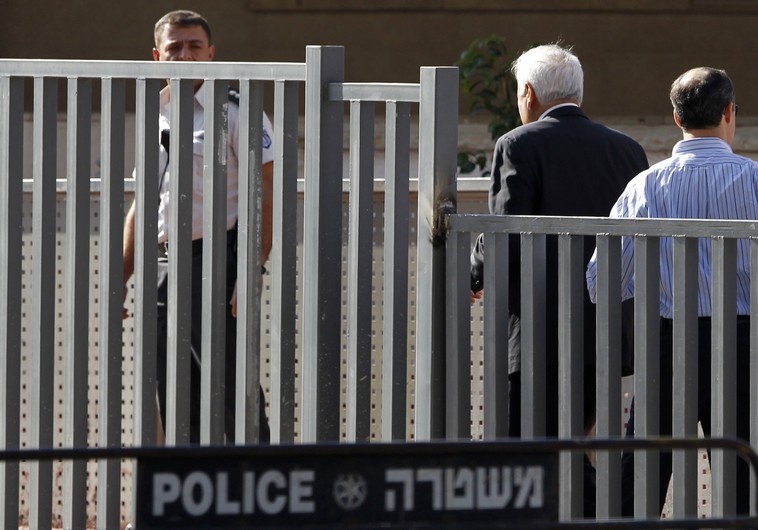 Former Israeli president Moshe Katsav walks towards the entrance to Maasiyahu prison in Ramle, near Tel Aviv, December 7, 2011 (REUTERS)Careers have ended in Israel for far less. Former presidential candidate and long-time minister Silvan Shalom never admitted to harassing a woman and there is no tape of him doing so.But he resigned, and the career of the man once seen as Prime Minister Benjamin Netanyahu’s most serious competition is clearly over.The allegations that former presidential candidate Meir Sheetrit paid hush money to a former housekeeper after sexually harassing her only came out the day after he lost the 2014 vote to President Reuven Rivlin.But there is no doubt that if the report about him was aired two days before, his run for president would not have only been a loss but a loss by a landslide.That is not to dismiss the unfortunate history of sexual harassment and even assault in Israel. The case of former defense minister Yitzhak Mordechai comes to mind.He resigned from the cabinet in 2000 after being indicted for sexual misconduct during his military service. In 2001 he was convicted of harassing and sexually assaulting two women.While in the past, those who were allegedly assaulted by general- turned-politician Rehavam Ze’evi were afraid to come forward. Now, his image has been tarnished after his death. Even a dead man is no longer immune.Israel has come a long way. There is much less tolerance for any mistreatment of women. Even flimsy allegations that are later proven false can end a man’s candidacy for any political post from president to student council.There are commentators who have said that Trump’s in-your-face, blatantly honest style would translate well into Israeli politics. There have been suggestions that MKs like Erel Margalit and Oren Hazan have even copied it.But when it comes to vile comments and violent actions against women, the buck – and the shekel – stops here.