Analysis: It’s been 52 weeks of irony for Benjamin Netanyahu

Looking back one year later, the positives and negatives since the elections are surprisingly intertwined in the same news, with ironic results. 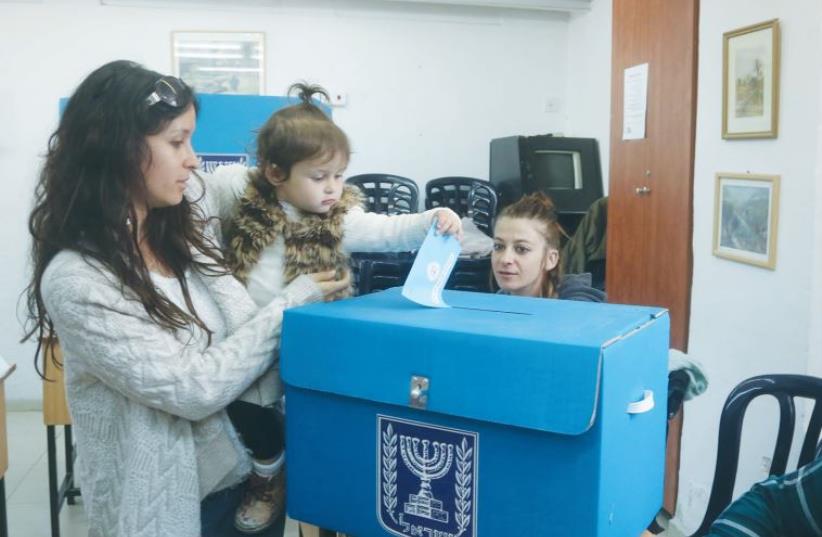 A WOMAN casts a ballot in the March 2015 national election
(photo credit: MARC ISRAEL SELLEM)
Advertisement
When Prime Minister Benjamin Netanyahu emerged victorious in the March 17, 2015, election, it could have been expected that there would be positive and negative developments for him in the year ahead.But looking back one year later, the positives and negatives are surprisingly intertwined in the same news, with ironic results.On the one hand, there is wave of terrorism on the streets. But on the other hand, IDF Chief of Staff Lt.-Gen. Gadi Eisenkot recently said the strategic security situation is the best it’s ever been.On the one hand, the latest poll found that only 8 percent of Israelis are happy with Netanyahu’s handling of the security situation. But on the other hand, he and his government are in no immediate political danger.On the one hand, Netanyahu’s governing coalition is the smallest it could be.But on the other hand, it has been surprisingly stable.How did these ironies come about? Eisenkot was referring mainly to the regional security situation. He has noted Israel’s success in staying out of the fighting going on in Syria, Hezbollah’s losses in that civil war, the deterrence of Hamas, and the best relationship ever with Egypt.And unlike politicians, Eisenkot is unafraid to say out loud that Israel is reaping the security benefits of the Iranian nuclear deal that Israelis in general and Netanyahu in particular so vigorously opposed. The nuclearization of Iran has been delayed, and while money will flow in to its proxies, they are currently reportedly under orders not to attack Israel, because Iran needs quiet while it rebuilds its economy.Yet how can Eisenkot talk about the best current strategic security situation ever while Israelis are getting killed on the streets? The answer is again that he is not a politician, so he hasn’t yet learned how to be politically correct.Yes, it is insensitive to say that while mothers are burying their children. But 35 people killed in six months is not a security crisis. It is less than the number of Turks killed in one car bomb attack Sunday in Ankara and comparable to one terrorist attack during the second intifada on Passover eve 2002 at Netanya’s Park Hotel.The polls have found that Israelis blame Netanyahu for not doing more to end the violence. More steps to limit the movement of Palestinians and Jerusalem Arabs and more house demolitions and expulsions would be welcome by the public.The reason that Netanyahu has not taken more serious steps could be because the victim count is not high enough to justify them, because he cares about how such actions would look abroad, and because he genuinely believes that keeping the Palestinians working and happy is one of the ways to prevent terrorism.But if Mr. Security has lost his title in the eyes of the public, why are he and his government in no immediate political danger? The simplest answer is that Israelis do not yet see an alternative who would make them safer.That could change if former IDF chiefs Gabi Ashkenazi or Benny Gantz enter politics.It is also because of another strange irony: Because of the way the political system works, if the parties in the coalition were doing well in the polls, they would have an interest in bringing down the government and seeking an election to get another four years in power.Because the coalition parties are doing poorly in the polls, they have an interest in the government lasting longer. So the worse a government is faring, the longer it lasts.As for the coalition, its razor thin majority should make it unstable, but in fact it has reinforced the need of every MK to be disciplined, because they don’t want to lose their jobs. Even the most undisciplined MK, Oren Hazan (Likud), will not vote against his government on key issues.The coalition has proven homogeneous, and because it is so small, there are fewer people to flex political muscles and tell Netanyahu what to do.But, of course, ironically or not, that can all change in the year ahead.