Analysis: Money is not what makes the US-Israel aid deal important

While the size of the aid is important, it is actually less critical for Israel than the link the deal creates between the IDF and the Pentagon. 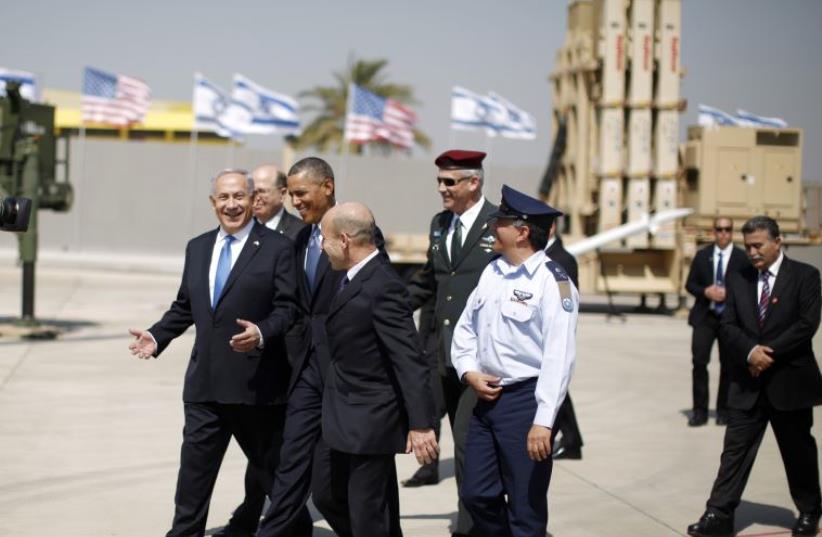 US President Barack Obama walks with Prime Minister Benjamin Netanyahu as he views an Iron Dome Defense Battery at Ben-Gurion International Airport, March 20, 2013.
(photo credit: REUTERS)
Advertisement
“With America’s help, Israel has grown to be a powerful, modern state. I believe that we can now say that Israel has reached childhood’s end, that it has matured enough to begin approaching a state of self-reliance.”Who said this? It was Benjamin Netanyahu, in an address to a joint session of the US Congress in his first term as prime minister in 1996. What Netanyahu announced was essentially the end of American economic aid to Israel, which had been about $1.2 billion since the Camp David Accords were signed in 1979.Israel weaned itself off that aid within 10 years, but at the same time it increased the military aid received from Washington, eventually settling on approximately $3b.annually since 2007. Continuation of that aid, and the new amount Israel will receive, is currently at the heart of the drawn out aid talks between the Prime Minister’s Office and the White House.One question though remains to be asked: does Israel really need the military aid to begin with, and can it, like Netanyahu declared in 1996, reach the end of its “childhood” and approach a “state of self-reliance”? There are those – many of them longtime supporters of Israel – who would answer yes. Israel, they say, has after 68 years of statehood demonstrated economic independence and prosperity. The country’s high-tech sector is booming – indeed, in the first half of this month nearly $300 million were invested in Israeli start-ups – and the finalization of the gas deal will start to pump billions of dollars into the Israeli economy.There is even talk in Jerusalem about the establishment of a sovereign wealth fund, putting it in the exclusive club of places like Qatar, Singapore and Hong Kong.In addition to those opposed to aid, there are also many who argue that it would be in Israel’s strategic interest to wean itself off of Uncle Sam.By not taking military aid, these people contend, Israel would not have to listen to every diktat from Washington, leaving Jerusalem more diplomatically independent.Those voices are important to keep in mind: there are many who already take issue with Israel receiving more than half of the overall foreign military financing that the US extends across the globe, and Israel needs to be concerned that the longer the talks drag on, the more those who oppose aid will gain strength.For Israel, the aid is important for three primary reasons.First, the amount of money cannot be underestimated, as it makes up a significant percentage of Israel’s defense spending.But even without the money, the aid is crucial for the State of Israel - the allocation of billions of dollars in aid inherently creates an American buy-in for what happens in the Jewish state.In so doing, the country’s neighbors – particularly its enemies – thereby recognize that the US has Israel’s back.In addition, the obligation to spend the vast majority of the money in the US creates a linkage between the IDF and US defense contractors. Israel wants to buy their hardware, and they want to sell them.The result is that pressure on the administration to approvethe sale to Israel of a new missile or aircraft, as an example, comes from three directions: Israel, its US-based supporters, and the defense companies themselves.The roll out of Israel’s first F-35 stealth fighter jet in Texas on Wednesday – which will make Israel the first country outside the US to receive the plane – is an example of how this all works.This interlocking connection is what ensures that Israel receives the most-advanced technology coming out of the US. While the size of the aid is important, it is actually less critical than the link that the deal creates between the IDF and the Pentagon. That, on its own, is priceless.