Analysis: With multiple portfolios, Netanyahu is a jack of all trades

There are politicians who would give a kidney to achieve a fraction of Netanyahu’s power. 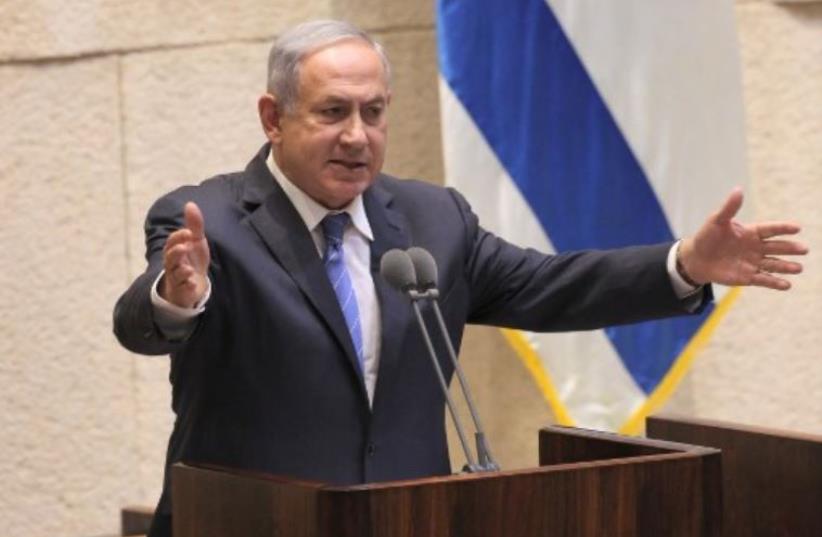 Prime Minister Benjamin Netanyahu addresses the Knesset in Jerusalem
(photo credit: AFP PHOTO)
Advertisement
Prime Minister Benjamin Netanyahu joked in Monday’s Likud faction meeting about the massive power he has taken for himself.When coalition chairman David Bitan told the faction that the departure of former defense minister Moshe Ya’alon would be formally announced for the record in the Knesset plenum, Netanyahu asked if a new defense minister would also be announced.“Temporarily, you’re the defense minister,” Bitan said, reminding him that Ya’alon’s resignation took effect Monday morning and Yisrael Beytenu head Avigdor Liberman has not joined the government yet.Netanyahu responded: “Defense minister, too? Another portfolio? Am I short of portfolios?” Indeed, besides prime minister and defense minister, he remains Israel’s foreign minister, and minister of the economy, communications, and regional cooperation. He was briefly interior minister following the resignation of Silvan Shalom, and he would still be health minister today if Yesh Atid did not challenge the appointment of Ya’acov Litzman as his deputy in court.This did not happen by mistake.Netanyahu has purposely tried to amass power so he can advance his own agenda without being obstructed by politicians who would get in the way.When Zionist Union head Isaac Herzog asked for the communications portfolio during coalition talks with Netanyahu, the prime minister turned him down, because he wants to continue to control regulation of the media and reforming the Israel Broadcast Authority.Netanyahu controls the Economy Ministry because he wants to complete his controversial gas deal and other pet projects.He has used the possibility of Herzog joining the government and his associates have cited rivalries in Likud as reasons for keeping the Foreign Ministry. But the true reason is that he wants to run foreign policy himself.There are politicians who would give a kidney to achieve a fraction of Netanyahu’s power.Herzog told the Knesset plenum Monday that it was recent terrorist attacks that persuaded him that he has to be in a position of power.Liberman admitted on Monday that he compromised previous demands on key issues because he wants to be defense minister.Deputy Regional Cooperation Minister Ayoub Kara stormed out of Monday’s Likud faction meeting in anger, because Netanyahu had not promoted him to a vacant portfolio.Perhaps burning bridges prematurely, the Druse Kara charged Netanyahu with racism.If Netanyahu is looking for an additional challenge, he should look back at a quote Republican presidential candidate Donald Trump made to The Jerusalem Post in 2013 after putting out a campaign video endorsing Netanyahu.“I think he would have been a great president of the United States,” Trump said at the time.Trump, now the presumptive Republican nominee, is looking for a running mate. Perhaps Netanyahu would take the job in the US, as long as he could keep all his jobs here.Another title never hurts.In Israeli politics, he is the victor. In the US he could be the veep.