Ariel also called for building E1, where there are plans for 3,500 apartments. 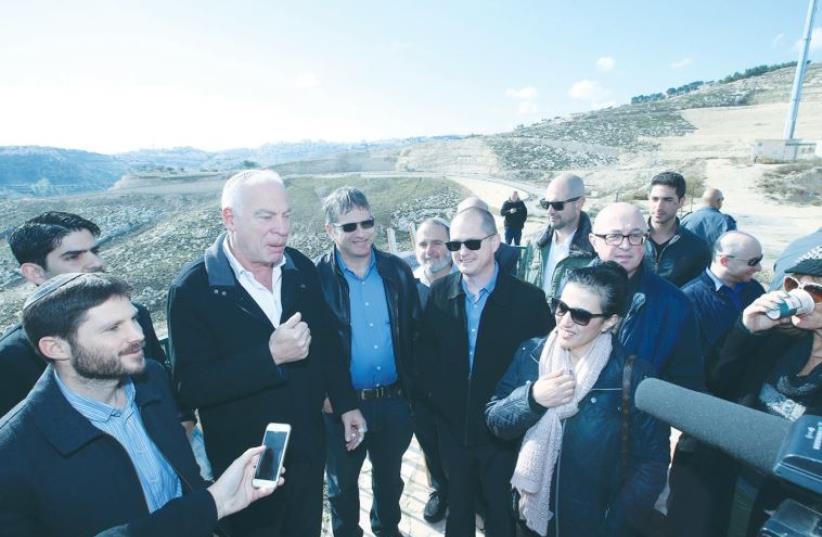 AGRICULTURE MINISTER Uri Ariel speaks at the E1 site in Ma’aleh Adumim yesterday, surrounded by members of the Knesset’s Land of Israel Caucus.
(photo credit: MIRI TZAHI)
Advertisement
Agriculture Minister Uri Ariel called on the government to annex Area C of the West Bank during a tour of Judea and Samaria led by the Knesset Land for Israel Caucus.As he spoke the Bayit Yehudi member stood on the hilltop of a controversial unbuilt area of the Ma’aleh Adumim settlement known as E1.Ariel has long been a vocal proponent of building in E1 and of unilaterally extending Israeli law to include Area C where all the settlements are located. Areas A and B of the West Bank, where the bulk of the Palestinians live, are under the civil control of the Palestinian Authority.“We should tell the prime minister, the government and the Knesset that the time has come to annex Area C,” Ariel said.“If someone asks about Areas A and B, than their time will come. When, we will see. For now, lets agree on Area C. There is more than 60% of the [West Bank] territory, with 50,000 Arabs. They do not pose a problem to the state of Israel,” he said.“I am suggesting that we unite around this call,” he said.Jewish residents of Judea and Samaria lack the full rights granted Israeli citizens  in the rest of the country, said Ariel.“This isn’t a normal situation,” he said. “There are too many laws that are not applicable and that discriminate negatively against us,” said the agriculture minister, himself a resident of Area C.Ariel also called for building E1, where there are plans for 3,500 apartments. Every prime minister since Yitzhak Rabin has promised to begin construction on E1.But all have failed to make good on that pledge under pressure from the United States and the European Union which feel that any construction in that bridgehead area near Jerusalem would undermine the chances of ever achieving a two-state solution.When Ariel was the construction and housing minister under the last government he created initial plans for 8,372 housing units. But Prime Minister Benjamin Netanyahu frozen those plans. His office has said that no building will occur on E1 at this time.Ariel said he wants to strengthen the prime minister so that he would be able to build on E1.“But in the meantime, we have to annex this area,” he said.Ma’aleh Adumim is the third-largest West Bank settlement. It is located just outside of Jerusalem and is home to 37,404 people. Palestinians believe that E1 and Ma’aleh Adumim should be part of their future state. Israel in turn has insisted that the settlement must be within its final borders. It views Ma’aleh Adumim as a vital part of preserving a united Jerusalem under Israeli sovereignty.Ma’aleh Adumim Mayor Benny Kashriel said his city was built with consensus from all the parties and as a result, he has been shocked, that it is part of the freeze on building plans.He charged that Netanyahu has taken his city out of consensus. “It is my government that has frozen this city,” he said.Ariel thanked the caucus for its help, but said that the time had come for more action.“You can come and speak to the cameras as much as you want, but it won’t bring building. That will only happen if you threatened to withhold votes unless building is approved here,” he said.“The moment you say this, the ministers will follow suit. Otherwise there won’t be building here.”