Ariel wrote the letter following reports of gestures Prime Minister Benjamin Netanyahu is willing to make to the Palestinians to ease tensions. 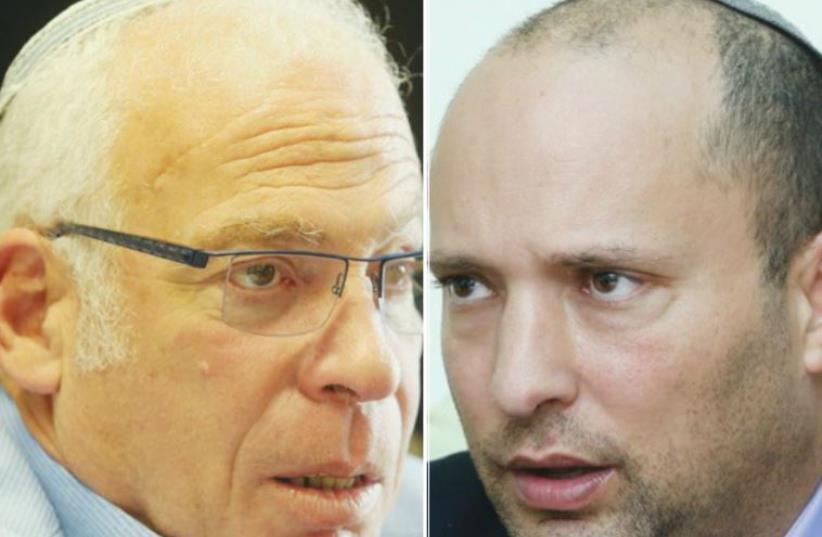 Bayit Yehudi's Uri Ariel (L) and Naftali Bennett
(photo credit: MARC ISRAEL SELLEM)
Advertisement
The Bayit Yehudi party should issue clear red lines for remaining in Prime Minister Benjamin Netanyahu’s government, Bayit Yehudi Minister Uri Ariel wrote in a letter to party leader Naftali Bennett Saturday night.Ariel wrote the letter following reports of gestures Prime Minister Benjamin Netanyahu is willing to make to the Palestinians to ease tensions. The gestures reportedly include transferring a small portion of Israel-controlled land in Judea and Samaria that is close to Arab cities to the PA for economic development, strengthening the PA’s security forces and increasing economic benefits.“Such gestures would be an ethical crime and a prize for terror that would endanger Israeli lives,” Ariel wrote Bennett.Ariel asked Bennett to raise such issues in the next Bayit Yehudi faction meeting. Bennett did not respond Saturday.Intelligence Minister Israel Katz on Saturday night called for a full closure of the areas of the West Bank that are home to those who have committed recent terrorist attacks as well as roads where attacks have taken place, a step that Netanyahu has been reluctant to take.Yisrael Beytenu leader Avigdor Liberman called Netanyahu’s handling of the wave of terrorism facing Israel “catastrophic.”At a cultural event in Tel Aviv Saturday, Liberman said that in order to extinguish terrorism, the sources that incite it, its finance and its commanders must be dealt with. When these elements have immunity, he said there is no chance to stamp out the terrorism.“Without a shadow of doubt, targeted assassinations must be renewed because they are effective,” he said. “The terrorists are continuing to dig tunnels and manufacture long-range missiles.”On the Hamas-ruled Gaza Strip, Liberman said there was no need to conquer the territory but that Israel must disturb the routine of terrorists there.Israel, he said, is the largest financier of Palestinian terror.“Every family of a Palestinian terrorist who is killed, receives from Abu Mazen [Palestinian Authority President Mahmoud Abbas] 14-15 thousand shekels a month that the Palestinian Authority gets from Netanyahu,” he said.Liberman said the money transferred to the PA comes from taxes Israel collects for it, and that there is no reason to continue transferring the funds because the Palestinians are in breach of agreements regarding their use.The Likud responded to Liberman by saying his understanding of the war on terror is limited to automatic fire of empty slogans that have no connection to reality.