The petition was created through the British parliament website. 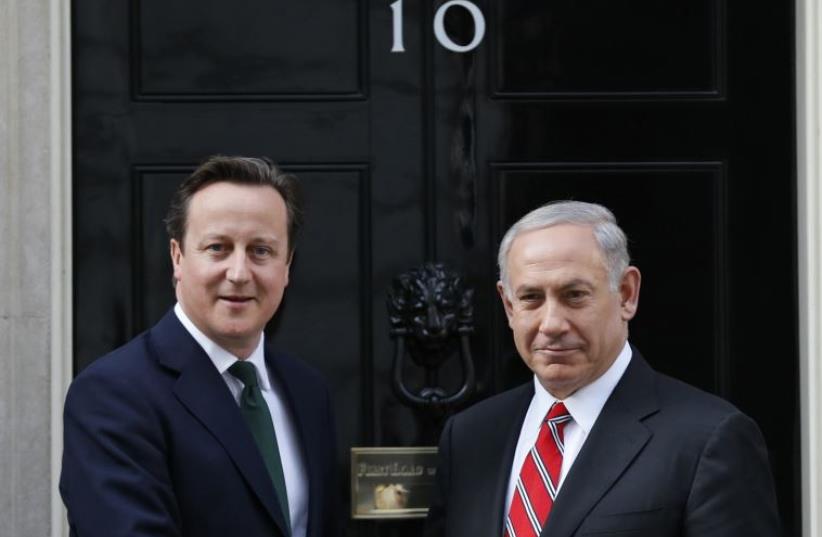 Britain's Prime Minister David Cameron (L) greets Prime Minister Benjamin Netanyahu at Number 10 Downing Street in London, April 17, 2013
(photo credit: REUTERS)
Advertisement
Israel dismissed as a meaningless publicity stunt an online petition in Britain demanding Scotland Yard arrest Prime Minister Benjamin Netanyahu for alleged war crimes when he visits London next month.“This is a public relations stunt that has no practical significance,” Foreign Ministry spokesman Emmanuel Nachshon said in a statement.“The bilateral relations between Britain and Israel are closer than ever,” he said, stating that this was evident in trade figures that have doubled over the last few years, as well as fruitful academic, scientific and cultural cooperation between the two countries.The petition was created through the British Parliament E-petitions website. If a petition garners 100,000 signatures, the issue will be considered for a debate in Parliament, but there is no guarantee it must be debated. As of Tuesday evening, the petition had more than 35,000 signatures, but Israel believes the Cameron government will not allow a debate of this issue.The petition’s author, a British national who goes by the name of Damian Moran, wrote that Netanyahu is to hold talks in London this September, and “under international law he should be arrested for war crimes upon arrival in the UK for the massacre of over 2,000 civilians in 2014.”Since Netanyahu is a sitting prime minister with diplomatic immunity, there is no chance he will be arrested under universal jurisdiction laws. Nonetheless, Israelis have been apprehensive over the prospect that former army officers and defense chiefs could be arrested overseas.Earlier this year, Israeli diplomats scrambled to secure immunity for former IDF chief of staff and defense minister Shaul Mofaz just prior to his trip to London for a defense conference. Israeli media reported that Mofaz was at risk of being detained on possible war crimes charges since Israeli authorities had tried and failed to secure diplomatic immunity for him on his trip.Four years ago, the British government approved a change to the controversial universal jurisdiction law, which has been used by anti-Israel activists to obtain arrest warrants for alleged war crimes against Israeli dignitaries visiting the UK. The law previously allowed private complaints of war crimes to be lodged against military personnel even if they were not British citizens and the alleged crimes were committed elsewhere.High-profile targets in recent years have included former foreign minister Tzipi Livni and former defense minister Ehud Barak.