With Ra’am losing ground, there must be some other party to pick up the pieces and enjoy the abundance of the now available votes.

Recent polls presented by all mainstream Israeli TV channels show that several parties which now form the current coalition government are losing votes and are in danger of not reaching the electoral threshold to enter Israel’s parliament. These polls are significant as Israel’s Knesset on Wednesday passed the first of four votes needed to dissolve the Knesset and head to new elections, the fifth election in three-and-a-half years.

One of these parties is the United Arab List-Ra’am, an unexpected coalition partner that will be forever remembered for its bold move when it joined the government coalition of Naftali Bennett and Yair Lapid. But if Ra’am, which derives its ideology from and is dependent on Israel’s southern faction of the Islamic Movement, is losing ground, then there must be some other party to pick up the pieces and enjoy the abundance of the now available votes. Not so fast, experts tell the Media Line, and warn that the current situation might result in low voter turnout and a significant failure for several political parties

In 2020, in the wake of the passage of the nation-state law – which specifies the nature of the State of Israel as the nation-state of the Jewish people, Arab society in Israel mobilized itself and voted in a record number of Arab members of Knesset, the majority elected from the political alliance of four Arab-majority parties in the Joint List with 15 seats. In elections a year later, the number dropped to just 10, following the split between the Joint List, which garnered 6 seats, and Ra’am, with 4. Led by Mansour Abbas, a determined politician who decided to break the taboo on joining the government coalition, Ra’am became the first Arab party to become a full coalition partner, but the government lasted for only one year and now the race to the ballot box is about to begin again.

While there is little doubt that a fifth election in under four years is an expensive, difficult and undesired event for every Israeli, the Arab sector is especially prone to the feeling of futility and indifference.

Jalal Banna, a columnist and an expert on Arab affairs, told the Media Line that the Arab public in Israel can be divided into three groups. “The first one believes that the Arabs tried to join the coalition for a reason and it is essential for them to be an active part of any future coalition. The second group says, ’we are not in this game as we were meant to be an opposition and there is no way for us to be a coalition.’ The last group says that ‘we tried and it didn’t work out,’” he said. 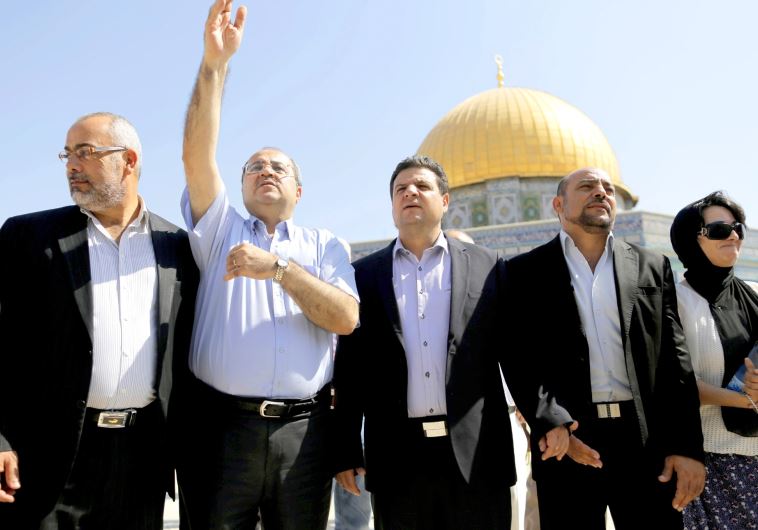 Lawmakers from the Joint Arab List stand in front of the Dome of the Rock during a visit to the compound in Jerusalem's Old City, July 28 (credit: REUTERS)

If Mansour Abbas will not make it into the Knesset, the Arab representation might go down to 5-6 seats only,”

This last group is “going to lower significantly the participation in elections and the voter turnout might be significantly thinned. If Mansour Abbas will not make it into the Knesset, the Arab representation might go down to 5-6 seats only,” according to Banna.

Hassan Mwasi, a veteran journalist and a media expert from Baqaa al-Gharbiya in Israel’s north, says that, just like in the rest of the country, the situation today in Israel’s Arab sector is quite complicated and for now “everything is open.”  Mwasi told The Media Line that “the Arab public is fed up and tired of both parties,” referring to both Ra’am and the Arab Joint List.

The controversial legacy of Mansour Abbas

“Abbas did something historical, there is no doubt about it. But the timing seems wrong,” Banna explained, indicating that there was not enough time to translate decisions into deeds. “You know how it is: the government adopts some decision, and then it takes a few years to implement it. For now, there is not much that Ra’am can show off,” he said.

Among the Jewish Israelis who were supportive of the Bennett-Lapid government, many praised Abbas for his reformist and bold approach. Some praised him as “the only real and authentic” representative of the Arab citizens of Israel.

Mwasi explains that from his native town of Baqaa al-Gharbiya, as well as from the Negev – the traditional source of power and legitimacy for Ra’am, things look very different.

“Where is all that money that they promised to him? We don’t know. We don’t feel any change on the ground, any results. Sometimes we feel that even the Arab Joint List succeeds more from the opposition then Ra’am from the coalition,” Mwasi said. “And there is also a problem with the way that he runs things – this is not our mentality, and not our political tradition. When Ahmed Tibi achieves some results, he does it without giving up on principles, while Abbas basically says that he is ready to give up positions in order to get something that the Arabs in Israel are actually entitled to anyhow,” he added.

Speaking last week at Haaretz's Conference on Jewish-Arab Political Partnership, Abbas predicted that the outcome of future elections “will likely be similar and the resulting ruling coalition will face the same problems that the Bennett-Lapid government faced.” He added that he is confident about the future success of his party in future elections, but conditioned it on the success of the current government.

On Monday, Bennett and Lapid declared that they would dissolve the Knesset, leading to new elections this fall. Despite numerous predictions, Abbas’s Ra’am party was not the weakest link in the chain of this unusual coalition, and it wasn’t Ra’am that brought down the government.

Today, Ra’am is threatened by a mighty negative campaign being run by the Northern Branch of the Islamic Movement in Israel, that blames the party for betraying the principles of Islam, as well as by the Arab Joint List that accuses Ra’am of political opportunism.

“Only if a miracle will happen, these two parties – Ra’am and the Arab Joint List – will be able to find a path to work together again. If not, the struggle might be aggressive and the biggest loser will be the Arabs themselves,” Mwasi concluded.