Malcolm Turnbull said he hopes to strengthen defense and security ties with Israel. 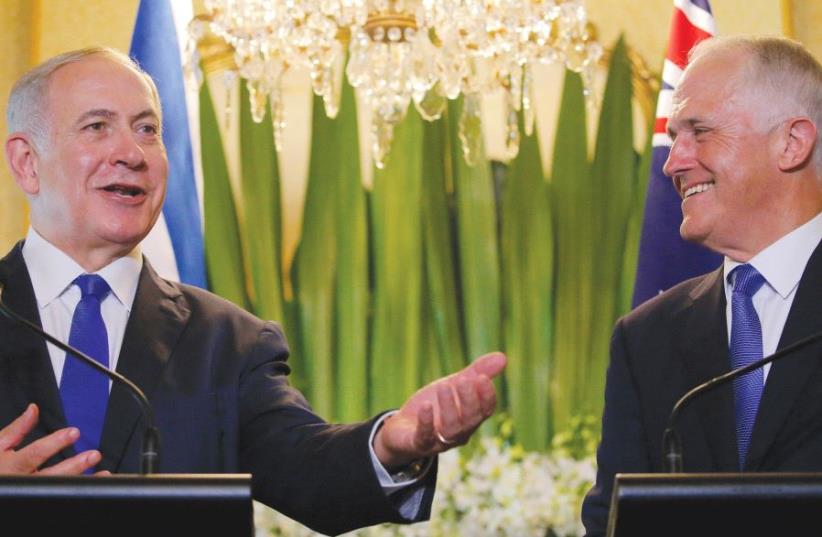 PRIME MINISTER Benjamin Netanyahu and Australian Prime Minister Malcolm Turnbull appeared inseparable during Netanyahu’s visit. They made several joint appearances, with Turnbull dedicating two full days to his counterpart.
(photo credit: REUTERS)
Advertisement
Australia and Israel stand together in the fight against “militant Islamic terrorism,” which is a threat to both counties as well as to all those who cherish freedom, Australian Prime Minister Malcolm Turnbull said in Jerusalem Monday evening.Turnbull, facing a deep political crisis at home after losing his one-seat working parliamentary majority last week, made his comments at a welcoming ceremony at the Prime Minister’s Office, where he began a brief 48-hour visit to take part in Tuesday’s ceremonies marking 100 years to the Battle of Beersheba.
Netanyahu and Australian PM Turnbull discuss strengthening Israel, Australia ties on Feb. 23 (credit: REUTERS)
Turnbull is the first Australian prime minister to visit since John Howard in 2000, and his visit is taking place just eight months after Prime Minister Benjamin Netanyahu was the first-ever sitting Israeli prime minister to visit Australia.It is a “long schlepp” from Australia to Israel, Netanyahu told Turnbull, saying that his traveling all the way to mark the Beersheba battle “says a lot about our friendship, says a lot about the deep roots between Australia and Israel, and also a lot about you and Lucy [his wife].”Netanyahu called Turnbull a “true friend of Israel” and said that their meeting will deal with how to make the relationship between the two countries “deeper, stronger and broader.”According to Australian media reports, Turnbull is coming in the hopes of strengthening Australia’s security and defense ties with Israel. Before leaving Australia, Turnbull said, “As a result of this visit we aim to upgrade the cooperation on defense, national security and the protection of crowded places.”Australia is currently the world’s seventh-largest importer of weapons and is an increasingly significant market for Israeli weaponry. With Netanyahu and Turnbull looking on, a Memorandum of Understanding regarding defense cooperation between the two countries was signed on Monday.Following the welcoming ceremony for Turnbull and his wife at the Prime Minister’s Office, the two leaders held a one-onone meeting. Netanyahu and his wife, Sara, then hosted the Turnbulls at the Prime Minister’s Residence for dinner.The main feature of Turnbull’s visit will be participation in the commemorative events on Tuesday marking the centennial of the Battle of Beersheba, where Australian and New Zealand forces conquered the city in what has been called one of the last great cavalry battles in history.That victory, on the first day of the Palestine campaign during World War I, paved the way for the defeat of the Ottomans and an end to their 400-year rule in the country.Netanyahu praised the courage of the Australians in that battle, and said it was the “gateway of the rebirth of the Jewish people.”Turnbull, who will deliver a speech in Beersheba on Tuesday before a reenactment of the charge of the Australian Light Horse Brigade that defeated the Ottomans there, said that battle was “one of those pivotal moments in history.”He noted that many of the young Australians who fought “came to fight in a foreign land, but yet one which was in many ways so familiar, because they shared the Bible – every place was a household name. It was a strange environment for them to be fighting in, but also – from a cultural point of view – so familiar.”That battle, he said, was “profoundly Australian in every respect,” and is “deeply etched in our national psyche.”Opposition leader Bill Shorten, whom the Foreign Ministry described in a statement as an “avid supporter of Israel,” will also be attending the ceremonies, as will a number of Australian ministers and parliamentarians.Because his trip was condensed from four days to two, Turnbull is not scheduled to meet any Palestinian Authority officials during his stay. During his visit he is also scheduled to meet President Reuven Rivlin and visit Yad Vashem.The Australian premier arrived a day after New Zealand’s Governor- General Patsy Reddy, also here to take part in the Beersheba ceremonies. This is the first-ever visit here by New Zealand’s governor- general.New Zealand’s former prime minister Bill English was originally scheduled to attend, but those plans were upended when he lost his job following elections there last month.Reddy met on Monday with Netanyahu, during which an aviation agreement was signed, with the goal being direct air links between Israel and New Zealand, a popular destination for young Israelis after their army service.Israel-New Zealand ties were badly strained and the diplomatic ties downgraded last December when Wellington was one of the four co-sponsors of an anti-settlement resolution at the UN Security Council. The relationship was patched up six months later, after English wrote a letter saying he regretted “the damage done to Israel-New Zealand relations” as a result of the move.On Sunday, as Reddy arrived, the Foreign Ministry in Jerusalem issued a statement saying the two countries “share a long history of positive cooperation dating back to the Battle of Beersheba, but also modern values and a great enthusiasm to promote, inter alia, future cooperation in the fields of R&D, hi-tech, agriculture and cyber technologies.”Reddy’s visit, the statement continued, “will undoubtedly cement yet further the ties between Israel and New Zealand on all levels.''