Malcolm Turnbull will be the first serving Australian prime minister to visit Israel since John Howard in 2000. 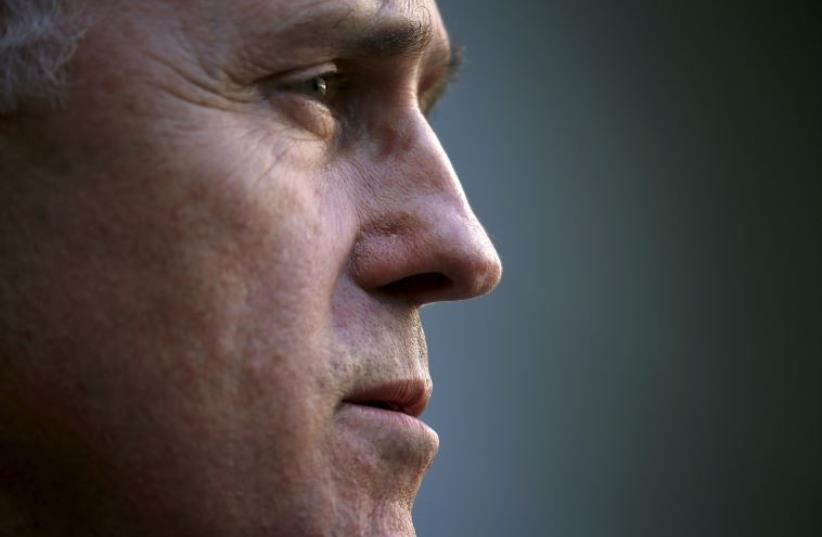 Australian Prime Minister Malcolm Turnbull listens to a question after announcing his new federal cabinet during a media conference in Canberra
(photo credit: REUTERS)
Advertisement
Facing a political crisis at home, Australian Prime Minister Malcolm Turnbull delayed his departure to Israel by three days, and will be arriving to take part in the ceremony marking 100 years to the Battle of Beersheba on Tuesday only on the day itself.Turnbull, who will be the first serving Australian prime minister to visit Israel since John Howard in 2000, was originally scheduled to arrive on Saturday night, and leave on Wednesday. Now he is slated to arrive on Tuesday, and leave late that night.
Australia"s political crisis: Deputy PM disqualified, October 27, 2017. (Reuters)
Australia’s High Court ruled on Friday that his deputy, Barnaby Joyce, and four other lawmakers should be expelled from Parliament because they held dual nationality. This has cost Turnbull’s government its parliamentary majority, and forced a crucial by-election for Joyce’s seat.According to Australian law, foreign citizens are ineligible to sit in the Parliament. Joyce has said he was unaware that he inherited New Zealand citizenship from his father, a New Zealander, and has since denounced it.This turn of political developments is the second that has altered plans for the festive marking of the Battle for Beersheba. Australian and New Zealand mounted forces captured Beersheba in a pivotal battle on October 31, 1917, on the first day of the Palestine campaign that paved the way for the end of Ottoman rule in Palestine later that year.New Zealand was originally planning to send its prime minister – who until last week was Bill English – to the commemoration.English, however, lost his job when the New Zealand First party decided – after close elections there last month – to join a coalition with English’s rival Labor party, making Jacinda Ardern the prime minister.Ardern was sworn in only on Thursday, obviously much too soon to travel around the world for a commemorative event. Instead, Wellington is sending New Zealand’s Governor- General Patsy Reddy as its representative.