Barak: Netanyahu's gov't must change, or be taken down, before it's too late

Barak warns that Netanyahu's right-wing government will make the world rise against Israel, tear Israeli society apart from within and alienate Jewish youth in the US from Israel. 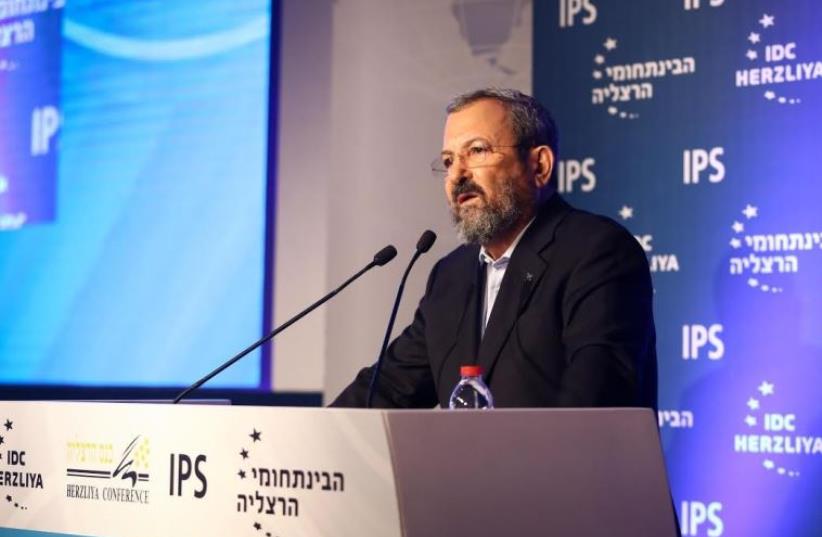 Ehud Barak addresses the Herzliya Conference, June 16, 2016
(photo credit: ADI COHEN ZEDEK)
Advertisement
Former prime minister Ehud Barak harshly criticized the government of Prime Minister Benjamin Netanyahu on Thursday, saying that if the country's leadership does not change its ways, the people will be forced to bring it down through protest and at the ballot box."I call on the government to get a hold of itself and to get back on track immediately," Barak said at the Interdisciplinary Center's Annual Herzliya Conference. "If you do not, it will be the duty of all of us, yes, all of us, to get up out of our seats, no matter how comfortable they are - and to bring it down, through popular protest and through the ballot box, before it's too late."Barak stated that Israel was strong in every sense of the word, "able to face reality no matter how cruel it is and to defeat any enemy."He added, however, that "a hostile takeover" of the government, particularly in the last year had occurred. "The agenda of the right-wing government, the use of scare tactics and threats has become the leading way," he said. "Netanyahu is responsible for the actions of his hijacked government."Barak warned that Netanyahu's right-wing government would make the world rise against Israel, tear Israeli society apart from within and alienate Jewish youth in the US from Israel.Attacking Netanyahu for a lack of diplomatic tact, Barak said that "no leader in the world believes a word that Netanyahu and his government says anymore."Barak said that Netanyahu's government was leading Israel "to the edge of the abyss."He expressed fear for the future of democracy in Israel given the government's current trajectory."If it looks like the buds of fascism, smells like the buds of fascism and walks like the buds of fascism - then it is the buds of fascism," Barak said. "That is the situation. Very much so."Agriculture Minister Uri Ariel (Bayit Yehudi) accused Barak of refusing to accept the will of Israel's voters. "Ehud Barak refuses to recognize Israeli democracy and Israel's citizens' choice of a nationalist government," he stated."Israel has still not recovered from Barak's short, but failed premiership, and here he is threatening to topple the government," Ariel said. "He's like a pyromaniac who started a big fire and then gives advice about how to put it out."