"I have no doubt that the building freeze in Jerusalem will be canceled thanks to the prime minister," says Jerusalem mayor. 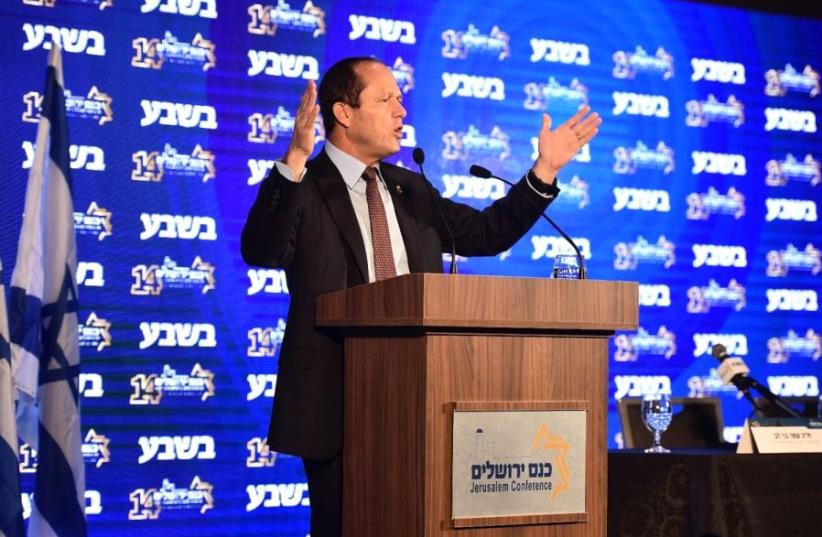 Jerusalem Mayor Nir Barkat speaks on February 14 at the Jerusalem Conference.
(photo credit: ISRAEL BERDUGO)
Advertisement
One day before Prime Minister Benjamin Netanyahu meets with US President Donald Trump, Jerusalem Mayor Nir Barkat on Tuesday assured a right-wing audience at the Jerusalem Conference that the capital’s US-imposed de facto building freeze will end.“We went through a difficult period of eight years during the Obama administration,” Barkat said of largely halted Jewish construction beyond the Green Line, on the second and final day of the two-day conference at the Crowne Plaza.“The Trump White House brings a window of opportunity to turn the tide, and bring Israel closer to the US administration.
In stunning rebuke against Obama, Barkat urges Israelis to support Trump
Our relationship with the Americans projects to the world the return of the US administration [defending] the rights of Israel, and especially Jerusalem.”Barkat added: “I want to strengthen the hands of the prime minister during the important mission he is on in the United States right now. I have no doubt that the building freeze in Jerusalem will be canceled thanks to the prime minister.”Indeed, according to Barkat, the municipality’s Local Planning and Construction Committee is poised to approve units in “all parts of the city: East and west, north and south.”Additionally, the mayor reasserted that he would continue to lobby the new US administration to relocate the American Embassy from Tel Aviv to Jerusalem.“I spoke with ambassador- designate David Friedman about the importance of the issue, and therefore I wish him success in his hearing before Congress,” he said.“It is clear that Jerusalem, the capital of Israel, is the place for the US Embassy, as [are capitals] around the world.”Meanwhile, Jerusalem Affairs Minister Ze’ev Elkin, who spoke at the conference on Monday, cited the importance of expedited construction beyond the Green Line under the Trump administration to make up for building freezes during Obama’s two terms.“One of the big challenges now is that if we want to keep Jerusalem as the capital of the Jewish state, we need to build 6,000 flats every year to make up for the last eight years,” he said.“It’s a strategic issue for us, and I hope the new administration will understand that the future of Jerusalem depends on our possibilities to build, and build a lot.”